From Infogalactic: the planetary knowledge core
Jump to: navigation, search
This article is about the Phoenician city. For other uses, see Byblos (disambiguation).

Byblos, in Arabic Jubayl (Arabic: جبيل‎‎  Lebanese Arabic pronunciation: [ʒbejl]), is a Mediterranean city in the Mount Lebanon Governorate, Lebanon. It is believed to have been occupied first between 8800 and 7000 BC,[1] and according to fragments attributed to the semi-legendary pre-Homeric Phoenician priest Sanchuniathon, it was built by Cronus as the first city in Phoenicia.[2] It is one of the cities suggested as the oldest continuously inhabited city in the world and the site has been continuously inhabited since 5000 BC.[3] It is a UNESCO World Heritage Site. 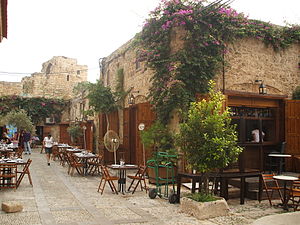 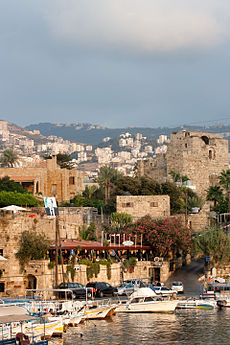 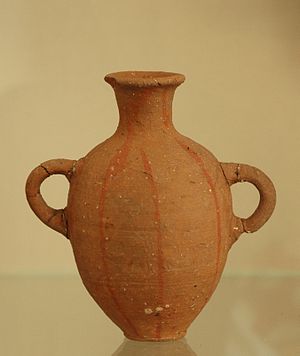 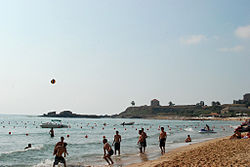 Gubal was a Canaanite city during the Bronze Age, at which time it also appears as Gubla in the Amarna letters. During the Iron Age the city is called Gebal in Phoenician (𐤂𐤁𐤋) and appears in the Hebrew Bible under the name Geval (Hebrew: גבל‎).[4] It was much later referred to as Gibelet, during the Crusades. The city's Canaanite/Phoenician name (GBL, i.e. Gubal, Gebal, etc.) can be derived from gb, meaning "well" or "origin", and El, the name of the supreme god of Byblos' pantheon. The present-day city is known by the Arabic name Jubayl or Jbeil (جبيل), a direct descendant of the Canaanite name. However, the Arabic name is most likely derived from the Phoenician word GBL[clarification needed] meaning "boundary", "district" or "mountain peak"; in the Ugaritic language GBL can mean "mountain", similarly to Arabic jabal.

Byblos is located about 42 kilometres (26 mi) north of Beirut. It is attractive to archaeologists because of the successive layers of debris resulting from centuries of human habitation. It was first excavated by Pierre Montet from 1921 until 1924, followed by Maurice Dunand from 1925 over a period of forty years.[8][9]

The site first appears to have been settled during the PPNB period, approximately 8800 to 7000 BC.[1][10] Neolithic remains of some buildings can be observed at the site. According to the writer Philo of Byblos (quoting Sanchuniathon, and quoted in Eusebius), Byblos had the reputation of being the oldest city in the world, founded by Cronus. During the 3rd millennium BC, the first signs of a town can be observed, with the remains of well-built houses of uniform size. This was the period when the Canaanite civilization began to develop.

Jacques Cauvin published studies of flint tools from the stratified Neolithic and Chalcolithic sites in 1962.[11] Remains of humans found in Chalcolithic burials have been published by H.V. Vallois in 1937.[12] Tombs from this era were discussed by Emir M. Chehab in 1950.[13] Early pottery found at the tell was published by E.S. Boynton in 1960 with further studies by R. Erich in 1954 and Van Liere and Henri de Contenson in 1964.[14][15][16]

Prehistoric settlements at Byblos were divided up by Dunand into the following five periods, which were recently expanded and re-calibrated by Yosef Garfinkel to correlate with Jericho;

Néolithique Ancien was a later settlement than others in the Beqaa Valley such as Labweh and Ard Tlaili. It was located on the seaward slope of the larger of the two hills that used to compose ancient Byblos, with a watered valley in between.[17]

The original site spread down into the valley and covered an area of 1.2 hectares (12,000 m2) providing fertile soils and a protected landing place for boats. Dunand discovered around twenty houses although some of the settlement was suggested to have been lost to the sea, robbed or destroyed.[9][18][19][20][21][22][23] Dwellings were rectangular with plastered floors, pottery was usually Dark faced burnished ware with some shell impressions.[24]

Néolithique Moyen was a smaller settlement of no more than 0.15 hectares (1,500 m2) adjacent to the older site. The pottery was more developed with red washes and more varied forms and elaborate decorations, buildings were poorer with unplastered floors.

The Néolithique Récent period showed development from the Moyen in building design, a wider range of more developed flint tools and a far larger variety of pottery with fabrication including silica. Énéolithique Ancien featured developments of "Canaanean blades" and fan scrapers. Adult burials in jars started to appear along with metal in the form of one copper hook, found in a jar. Some jars were lined with white plaster that was applied and self-hardened after firing.[25] Copper appeared more frequently in the Énéolithique Récent period along with multiple burials in tombs and jar handles with impressed signs.[14] Early Bronze Age remains were characterized by the development of Byblos combed ware and a lithic assemblage studied by Jacques Cauvin.[17][26]

Watson Mills and Roger Bullard suggest that during the Old Kingdom, Byblos was virtually an Egyptian colony.[8] The growing city was evidently a wealthy one and seems to have been an ally (among "those who are on his waters") of Egypt for many centuries. First Dynasty tombs used timbers from Byblos. One of the oldest Egyptian words for an oceangoing boat was "Byblos ship". Archaeologists have recovered Egyptian-made artifacts as old as a vessel fragment bearing the name of the Second dynasty ruler Khasekhemwy, although this "may easily have reached Byblos through trade and/or at a later period.".[27] Objects have been found at Byblos naming the 13th Dynasty Egyptian king Neferhotep I, and the rulers of Byblos maintained close relationships with the New Kingdom pharaohs of Ancient Egypt.

Around 1350 BC, the Amarna tablets include 60 letters from Rib-Hadda and his successor Ili-Rapih who were rulers of Byblos, writing to the Egyptian government. This is mainly due to Rib-Hadda's constant pleas for military assistance from Akhenaten. They also deal with the conquest of neighboring city-states by the Hapiru.

It appears Egyptian contact peaked during the 19th dynasty, only to decline during the 20th and 21st dynasties. Although the archaeological evidence seems to indicate a brief resurgence during the 22nd and 23rd dynasties, it is clear after the Third Intermediate Period the Egyptians started favoring Tyre and Sidon instead of Byblos.[28]

Archaeological evidence at Byblos, particularly the five Byblian royal inscriptions dating back to around 1200-1000 BC, shows existence of a Phoenician alphabetic script of twenty-two characters; an important example is the sarcophagus of king Ahiram. The use of the alphabet was spread by Phoenician merchants through their maritime trade into parts of North Africa and Europe. One of the most important monuments of this period is the temple of Resheph, a Canaanite war god, but this had fallen into ruins by the time of Alexander.

File:St JohnByblos.jpg
The Medieval Church of St. John in Byblos, Lebanon
File:Traditional lebanese house at Byblos.jpg
Traditional Lebanese house overlooking the Mediterranean sea, Byblos. This house is within the antiquities complex and illustrates the modern ground level with respect to excavations

In the Assyrian period, Sibittibaal of Byblos became tributary to Tiglath-pileser III in 738 BC, and in 701 BC, when Sennacherib conquered all Phoenicia, the king of Byblos was Urumilki. Byblos was also subject to Assyrian kings Esarhaddon (r. 681–669 BC) and Ashurbanipal (r. 668–627 BC), under its own kings Milkiasaph and Yehawmelek.

In the Persian period (538–332 BC), Byblos was the fourth of four Phoenician vassal kingdoms established by the Persians; the first three being Sidon, Tyre, and Arwad.

Hellenistic rule came with the arrival of Alexander the Great in the area in 332 BC. Coinage was in use, and there is abundant evidence of continued trade with other Mediterranean countries.

During the Greco-Roman period, the temple of Resheph was elaborately rebuilt, and the city, though smaller than its neighbours such as Tyre and Sidon, was a center for the cult of Adonis. In the 3rd century, a small but impressive theater was constructed. With the rise of Christianity, a bishopric was established in Byblos, and the town grew rapidly. Although a Persian colony is known to have been established in the region following the Moslem conquest of 636, there is little archaeological evidence for it. Trade with Europe effectively dried up, and it was not until the coming of the First Crusade in 1098 that prosperity returned to Byblos, known then as Giblet.

Byblos, under the name of Gibelet or Giblet, was an important military base in the Crusader Kingdom of Jerusalem in the 11th and 12th century, ruled by the Embriaco family, and the remains of its Crusader castle are among the most impressive architectural structures now visible at its center. The town was taken by Saladin in 1187, re-taken by the Crusaders, and eventually conquered by Baibars in 1266. Its fortifications were subsequently restored. From 1516 until 1918, the town and the whole region were part of the Ottoman Empire. Byblos and all of Lebanon was placed under French Mandate from 1920 until 1943 when Lebanon achieved independence.

Byblos is home to the professional schools of the Lebanese American University. The LAU Byblos Campus houses the Medical School, the Engineering School, the School of Architecture and Design, the only US accredited Pharmacy School in the Middle East, the School of Business, and the School of Arts and Sciences. The Campus is situated on a hill overlooking the city and the Mediterranean Sea.

Byblos is re-emerging as an upscale touristic hub.[29] With its ancient port, Phoenician, Roman and Crusader ruins, sandy beaches and the picturesque mountains that surround it make it an ideal tourist destination. The city is known for its fish restaurants, open-air bars, and outdoor cafes. Yachts cruise into its harbor today like they did in the sixties and seventies when Marlon Brando and Frank Sinatra were regular visitors to the city.[29] 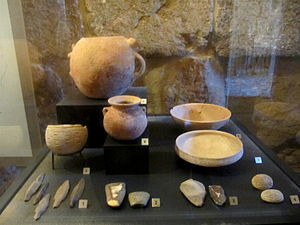 In the archaeological site of Byblos there are the remains of the Great Temple (also known as L-Shaped temple) built in 2700 BC, Temple of Baalat Gebal built in 2700 BC and Temple of the Obelisks built around 1600 BC.

Byblos Castle was built by the Crusaders in the 12th century. It is located in the archaeological site near the port. 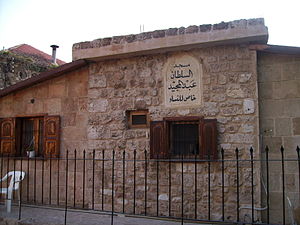 The old mosque by the Castle dates back to Mamlouk times in mid 1600, it was renovated by Sultan Abdul Majid and the mosque adopted his name afterwards.

Work on the church started during the Crusades in 1116. It was considered a cathedral and was partially destroyed during an earthquake in 1176 AD. It was transformed into stables by Islamic forces after the fall of the city, and was given to the Maronites as a gift by Prince Youssef Chehab of Lebanon in the mid-1700s, after they aided him in capturing the city.

Byblos Fossil Museum has a collection of fossilized fish, sharks, eel, flying fish, and other marine life, some millions of years old.

In the southeast section of the historic city, near the entrance of the archaeological site, is an old market where tourists can shop for souvenirs and antiques, or simply stroll along the old cobblestone streets and enjoy the architecture.

This summer music festival is an annual event that takes place in the historic quarter.

The 2006 Lebanon War negatively affected this ancient site by covering the harbor and town walls with an oil slick.[30][clarification needed] This has been however cleared and the coastal area has since then become again a destination for beach goers, especially in the late spring and throughout the summer season. 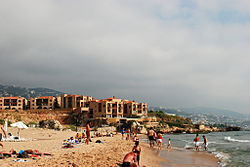 Today, Byblos is a modern city that still retains its historical past. Byblos remains as one of Lebanon's major tourist sites due to its rich history and scenic mountains overlooking the Mediterranean. Most residents of Byblos are Maronite Catholics. There are also some Shia Muslims that remain, whose ancestors were inhabitants of the city before expulsion at the end of the 13th century by the Mamluk Turks based on a fatwa from Ibn Taymiyyah. It is said that the city of Bint Jbeil ("daughter of Jbeil") in southern Lebanon was founded by those displaced Shi'a. Byblos has three representatives in the Parliament of Lebanon: two Maronites and one Shi'a.[31] Byblos was crowned as the "Arab Tour Capital" for the year 2016, which was announced by the Lebanese minister of tourism in the Grand Serail in Beirut.

Byblos is twinned with:

Byblos was chosen by Condé Nast Traveler as the second best city in the Middle East for 2012, beating Tel Aviv and Dubai,[32] and by the World Tourism Organization as the best Arab tourist city for 2013.[33]