Byron Antom Scott (born March 28, 1961) is an American professional basketball head coach and former player. He last coached the Los Angeles Lakers of the National Basketball Association (NBA). As a player, he won three NBA championships with the Lakers during their Showtime era in the 1980s.

Scott grew up in Inglewood, California and played at Morningside High School, in the shadow of what was then the Lakers' home arena, The Forum. He attended Arizona State University, but left school in his junior year to sign with the then San Diego Clippers.

Selected by the San Diego Clippers in the first round, with the fourth pick of the 1983 NBA draft, Scott was traded to the Los Angeles Lakers in 1983 in exchange for Norm Nixon. During his playing career, Scott suited up for the Lakers, Indiana Pacers and Vancouver Grizzlies. Scott was a key player for the Lakers during the Showtime era, being a starter alongside Magic Johnson, James Worthy, Kareem Abdul-Jabbar and A. C. Green. He played for the Lakers for 10 consecutive seasons (1983–1993). During that time he was on three NBA championship teams (1985, 1987, 1988). As a rookie, Scott was a member of the 1984 all-rookie team, averaging 10.6 PPG in 22 MPG. He led the NBA in three-point field goal percentage (.433) in 1984-85. In 1987-88, Scott enjoyed his best season, leading the NBA champion Lakers in scoring, averaging a career-best 21.7 ppg, and in steals (1.91 spg). He was the Lakers' starting shooting guard from 1984 until 1993. In 1996-97, the last year of Scott's playing career in the NBA, he went back to the Lakers and proved to be a valuable mentor for a team featuring Shaquille O'Neal, Eddie Jones, Nick Van Exel and 18-year-old rookie Kobe Bryant.

Scott with Panathinaikos in 1998

In the summer of 1997, Scott signed with the Greek Basket League team Panathinaikos for the 1997-1998 season. That season, he played with Panathinaikos in both the FIBA Saporta Cup (known then as the FIBA EuroCup), Europe's second-tier level competition after the Euroleague, and the Greek Basket League. In the Saporta Cup's 1997-1998 season, he averaged 13.4 points, 2.4 rebounds, 2.1 assists, and 1.1 steals per game.[1]

Byron Scott began his NBA coaching career in 1998, when he began the first of two seasons as an assistant with the Sacramento Kings. He specialized in teaching perimeter shooting during his tenure with the Kings and helped to lead the team to an excellent three-point shooting percentage during a pair of playoff seasons.

In 2000, Scott took over a struggling New Jersey Nets team. His team performed poorly in his first year, but that changed in the 2001-02 season with the arrival of Jason Kidd as the Nets raced to a franchise record of 52 wins. In the process, they won their first Atlantic division crown and appeared in their first NBA Finals against the Los Angeles Lakers. Despite losing the championship series to LA, Scott came back to coach the team through another successful season during the 2002-03 campaign, once again taking the team to the NBA Finals, but losing once again—this time to the San Antonio Spurs. New Jersey was up by double figures in game six, but the Spurs tightened up their defense, which won the game and the championship.

Scott was fired during the 2003–04 season, as New Jersey had a disappointing 22–20 record coming into the All-Star break, even though they were leading their division at the time of his dismissal. Rumors of a rift between Scott and Kidd circulated media outlets, with sources allegedly claiming that Kidd wanted Scott out of Jersey. All the parties, including then Nets GM Rod Thorn, denied the reports. Scott claimed that he was "very surprised" by the report and that he and Kidd "always got along".[2]

He was succeeded by his assistant Lawrence Frank.

While coaching the Nets, Scott lived in Livingston, New Jersey.[3] 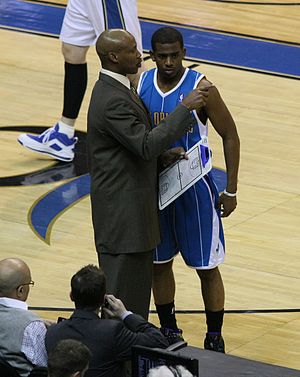 Scott became the head coach of the New Orleans Hornets in 2004. In the 2005–06 and 2006–07 seasons, he guided the team to a pair of sub .500 seasons. One obstacle was that the team played most of its home games in Oklahoma City due to Hurricane Katrina's devastation of New Orleans.

In the 2007–08 season, Scott had his first winning season as the Hornets head coach. They had a winning percentage of .683 with a record of 56–26. They became Southwest Division champions and finished 2nd overall in the Western Conference. Scott was named the head coach of the 2008 Western Conference All-Star team, and a few months after, he was awarded the 2007–2008 NBA coach of the year award. Due to his success the Hornets awarded Scott with a two-year extension.

The Hornets had a 30–11 home record and a 26–15 road record and clinched the second seed in the Western Conference Playoffs. The Hornets won their first round series against the Dallas Mavericks, posting a 4–1 record for the series. They would go on to face the defending champion San Antonio Spurs in the conference semifinals. An unusual trend of home court blow outs would mark the series until the deciding game 7 when the veteran Spurs would pull out a 91–82 win on the Hornets rowdy home court. The win marked the 100th playoff victory for Spurs coach Gregg Popovich.

In the 2008-09 season, the Hornets finished 49-33 and entered the playoffs as a seventh seed. They faced the Denver Nuggets in the first round, losing after five brutal games, including 21- and 29-point blowouts, as well as a 58-point loss in game 4, which tied the worst margin of defeat in NBA postseason history.[4][5] Scott was relieved from his head coaching duties for the Hornets on November 12, 2009, following a 3-6 start.[6] He was mentioned as a candidate for several NBA coaching jobs, including the Chicago Bulls, due to his success coaching another young star point guard Chris Paul.

Following his dismissal, he briefly served as a studio analyst for the NBA on ESPN.

On July 2, 2010, Scott was named head coach of the Cleveland Cavaliers, a few days before the team lost star LeBron James to the Miami Heat.[7][8] During his first season at the helm of the Cavs, he watched his team endure the longest losing streak ever in the NBA. The 26-game, record-breaking, losing streak ended on February 11, 2011 when they defeated the Los Angeles Clippers in overtime at home. The Cavaliers ended up finishing the season with a 19-63 record, which was the second-worst record in the NBA, only ahead of the Minnesota Timberwolves. However, like his tenure in New Orleans, he was soon blessed with coaching another Rookie of the Year point guard, this time in Kyrie Irving, whom the Cavaliers selected first overall in the 2011 NBA Draft. His second season in Cleveland saw them improve to 21 victories in a shortened 66-game schedule.

On April 18, 2013, Scott was fired by Cleveland Cavaliers management.[9] During his tenure, the Cavaliers struggled defensively, ranking in the bottom five of the league in defensive efficiency in each of his three seasons.[10]

Scott spent the 2013–14 season as a Lakers television analyst on Time Warner Cable SportsNet.[11] After the season, he was the frontrunner to become the new Lakers head coach. Scott interviewed three times for the position, which had become vacant after Mike D'Antoni's resignation.[12] On July 28, 2014, he signed a multi-year contract to coach the Lakers.[13]

With the team rebuilding in 2014–15, Scott finished his first season as coach of the Lakers with a 21-61 record. In the 2015 NBA Draft, the Lakers selected Ohio State point guard D'Angelo Russell with the second overall pick. The Lakers finished a franchise-worst 17–65 in 2015–16, Kobe Bryant's final season before retiring. It was the fifth straight season in Scott's coaching career that his team finished last in the division. On April 24, 2016, the Lakers did not exercise their option on Scott's contract for the following season, deciding to pursue a new coach.[14] His 38-126 (.232) record with the team was the worst of any of the 16 coaches that had led the franchise for at least two seasons.[15]

Scott's non-profit organization, The Byron Scott Children’s Fund, has raised more than $15 million over the past decade, with the proceeds going to various children’s charities.[16] Scott has recently served as a studio analyst for ABC's NBA telecasts and was featured on ESPN.

Scott and his wife, Anita, have three children, Thomas, LonDen and DaRon.[17] In June 2013, Byron and Anita separated and in March 2014, Byron filed for divorce after 29 years of marriage due to irreconcilable differences. [18]