Cáceres (Spanish pronunciation: [ˈkaθeɾes]) is the capital of Cáceres province, in the autonomous community of Extremadura, Spain. In 2014 its population was around 96,000. The municipio has a land area of 1,750.33 km2 (675.81 sq mi), the largest geographically in Spain. The walled city has been declared a UNESCO World Heritage Site.

There have been settlements near Cáceres since prehistoric times. Evidence of this can be found in the caves of Maltravieso and El Conejar.[1] The city was founded by the Romans in 25 BC.

The old town (Parte Antigua) still has its ancient walls; this part of town is also well known for its multitude of storks' nests. The walls contain a medieval town setting with no outward signs of modernity, which is why many films have been shot there[citation needed] . The Universidad de Extremadura, and two astronomical observatories are situated in Cáceres. The city is also a seat of the Roman Catholic Diocese of Coria-Cáceres.

Cáceres was declared a World Heritage City by UNESCO in 1986 [2] because of the city's blend of Roman, Moorish, Northern Gothic and Italian Renaissance architecture. Thirty towers from the Islamic period still stand in Cáceres, of which the Torre del Bujaco is the most famous.

The city of Cáceres is located in the province of Cáceres, in the Extremadura region of western central Spain. The city has a continental climate which is tempered by its proximity to the Atlantic Ocean. In winter the average temperature does not exceed 14 °C (57 °F) maximum, reaching 8 °C (46 °F) minimum, with some frost. In summer the average maximum temperature is 34 °C (93 °F) and the average minimum is 19 °C (66 °F). Rainfall is abundant in the months of October, November, March, April and May, but very intermittent. [3] 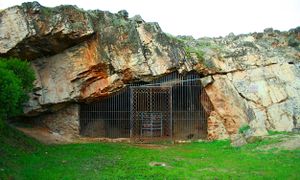 The origins of Cáceres go back to prehistoric times, as evidenced by the paintings in the Cuevas de Maltravieso (Maltravieso Caves) which date back to the late Paleolithic period. Visitors can see remains from medieval times, the Roman occupation, Moorish occupation and the Golden age of Jewish culture in Spain. Cáceres has four main areas to be explored: the historical quarter, the Jewish quarter, the modern center, and the outskirts.[5]

The first evidence of humans living in Cáceres is from the Late Paleolithic era, around 25,000 BC. Cáceres as a city was founded as Castra Caecilia by Quintus Caecilius Metellus Pius and started to gain importance as a strategic city under Roman occupation, and remains found in the city suggest that it was a thriving center as early as 25 BC. Some remains of the first city walls built by the Romans in the 3rd and 4th centuries still exist, including one gateway, the Arco del Cristo. 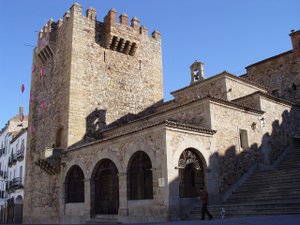 After the fall of the Western Roman Empire, the city was occupied by the Visigoths, and entered a period of decline until the Arabs conquered Cáceres in the 8th century. The city spent the next few centuries mostly under Arab rule, although power alternated several times between Moors and Christians. During this time, the Arabs rebuilt the city, including a wall, palaces, and various towers, including the Torre de Bujaco. Cáceres was reconquered by the Christians in the 13th century (1229). During this period the city had an important Jewish quarter: in the 15th century when the total population was 2,000, nearly 140 Jewish families lived in Cáceres. The Jewish population was expelled by Queen Isabella and Ferdinand of Aragon in 1492, but many remains of the Jewish presence of the period can still be seen today in the Barrio San Antonio.

Cáceres flourished during the Reconquista and the Discovery of America, as influential Spanish families and nobles built homes and small palaces there, and many members of families from Extremadura participated in voyages to America where they made their fortunes. In the 19th century, Cáceres became the capital of the province, marking a period of growth which was halted by the Spanish Civil War. Today, the headquarters of the university as well as several regional government departments are to be found in Cáceres. 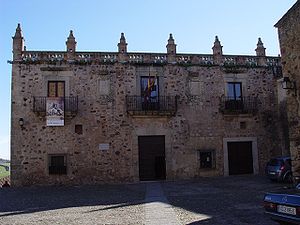 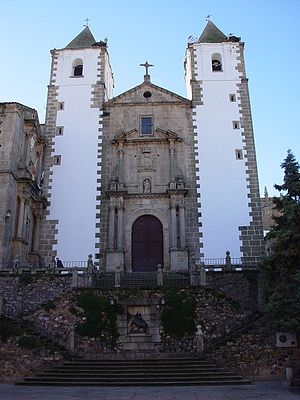 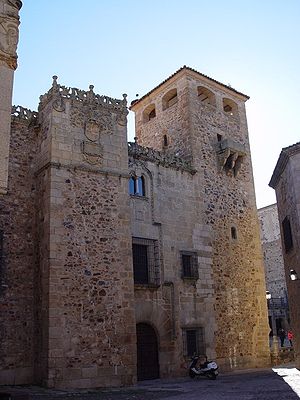 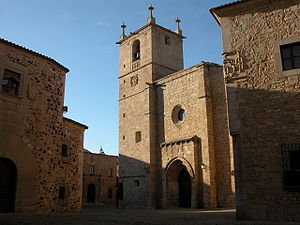 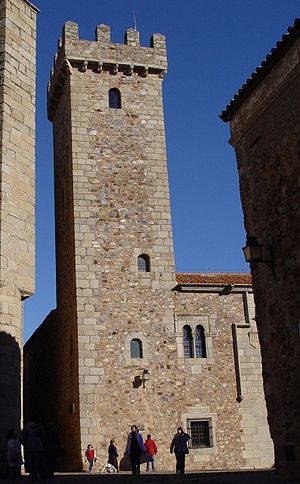 Tower of the Las Cigüeñas Palace. 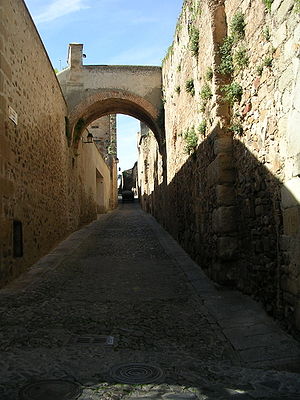 The city is served by the Cáceres Railway Station. Also, across the street is the bus terminal, with multiple buses daily to other cities.

The small streets in the historical center have lots of small shops selling typical products. The convents sell homemade sweets and pastries. Wines from Extremadura are affordable, full-bodied red wine. Local liquors include cherry liquor made with cherries from the nearby Jerte valley, or other original liquors such as chestnut or blackberry. Other produce in the province include sheep cheese (Torta del Casar, is not made of goat milk, but with milk from merino sheep), fig cake, chestnuts, hams and other pork products, lamb, olive oil, and paprika (pimentón de la Vera).

Salt-cured ham and red wine are produced locally and are officially recognized by the Spanish government. Both goat and sheep cheese are produced by traditional methods and renowned throughout the country. Cáceres is also famous for its stews, roast meats (especially pork, lamb and game), fried breadcrumbs (migas), trout, pastries and honey.

The University of Extremadura (founded in 1973) has a campus in Cáceres.