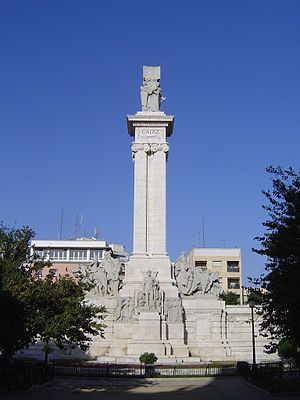 Monument in Cádiz to the Cortes and the 1812 constitution

The Cádiz Cortes was the first national assembly to claim sovereignty in Spain.[1] It represented the abolition of the old kingdoms.[2] The opening session was held on 24 September 1810, in the building now known as the Real Teatro de las Cortes. It met as one body and its members represented the entire Spanish empire.[3] The sessions of the national legislative body (traditionally known in Spain as the Cortes) met in the safe haven of Cádiz during the French occupation of Spain during the Napoleonic Wars. The Cádiz Cortes were seen then, and by historians today, as a major step towards liberalism and democracy in the history of Spain. The liberal Cortes passed the Spanish Constitution of 1812, which established a constitutional monarchy and eliminated many basic institutions that privileged some groups over others.[4]

From the first days of the Peninsular War, juntas appeared as underground opposition to the French-imposed government. They were established by army commanders, guerrilla leaders, or local civilian groups. Convinced that unity was needed to coordinate efforts against the French and to deal with British aid, several provincial juntas—Murcia, Valencia, Seville and Castile and León—called for the formation of a central body. After a series of negotiations that included the discredited Council of Castile, a Supreme Central Junta met in Aranjuez on 25 September 1808.[5] Serving as surrogate for the absent royal government, it called for representatives from local provinces and overseas possessions to meet in an "Extraordinary and General Cortes of the Spanish Nation," so called because it would be both the legislative body for the empire and the body that would write a constitution for it. By the beginning of 1810, the forces under the Junta's command had suffered serious military reverses at the battles of Ocaña and Alba de Tormes. The French inflicted large losses on the Spanish, took control of southern Spain and forced the government to retreat to Cádiz, its last available redoubt on Spanish soil. In light of this, the Central Junta dissolved itself on 29 January 1810 and set up a five-person regency, charged with convening the Cortes. By the time the delegates were to be chosen, some of Spain's American provinces had successfully established their own juntas, which did not recognize the authority of either the central junta or the regency and therefore did not send representatives, although many other regions in America did. When the Cortes convened for the first time on 24 September 1810, 104 deputies were present, 30 representing overseas territories, although only one of the thirty-six American deputies arrived in time for the opening session. Eventually, about 300 deputies, including 63 from the New World, participated. The composition of the Cortes de Cádiz was diverse, with about one-third clergymen, one-sixth nobles and the remainder from the "third estate", the middle class.[3]

In the first session, the Cortes promulgated the proposition that it rather than the king was the national sovereign, since it represented the people. Afterwards, the national assembly divided the government into legislative, executive and judiciary branches. Given the contingencies of war that resulted from the forced displacement of Fernando VII, the regency announced that it would act as the executive until his return. But the legislative was dominant and when the regency opposed what it viewed as an infringement of its power, the Cortes arrested its members and removed them from their positions, establishing a second regency.[6]

The national assembly restructured the government while prosecuting a war in Spain and maintaining control overseas. Once deliberations started, the delegates split into liberal and conservative factions. Conservative Spaniards saw the Cortes at Cádiz as at best an interim solution until "the Desired One"—as Fernando VII was called by his supporters—could return. Most regalists, however, did not admit that a parliamentary body could legislate in the absence of a king. The liberals carried on the reformist philosophy of Carlos III and added to it many of the ideas of the French Revolution. They wanted equality before the law, a centralized government, an efficient civil service, a reform of the tax system, the replacement of feudal privileges by freedom of contract, and the recognition of property rights. As the liberals were the majority, they were able to transform the assembly from an interim government to a constitutional convention.

The product of the Cortes' deliberations reflected the liberals' dominance, and the Spanish Constitution of 1812 came to be the "sacred code" of liberalism; during the 19th century it served as a model for liberal constitutions of Latin nations. The national assembly created a unitary state with equal laws across the Spanish empire. The principal aim of the new constitution was the prevention of arbitrary and corrupt royal rule; it provided for a limited monarchy that governed through ministers subject to parliamentary control. It established that the unicameral legislature would meet annually in the capital. The constitution maintained that suffrage was not to be determined by property qualifications, and it favored the position of the commercial class in the new parliament, since there was no special provision for the Catholic Church or the nobility.[7] The constitution set up a rational and efficient centralized administrative system based on newly formed provinces and municipalities rather than follow historic boundaries. Repeal of traditional property restrictions gave the liberals the freer economy they wanted. However, the Spanish Constitution of 1812 denied people of African ancestry political rights and representation.[3]

A revolutionary document, the Spanish Constitution of 1812 marked the initiation of the Spanish tradition of liberalism, and when Fernando VII was restored to the throne in 1814, he refused to recognize it. He dismissed the Cortes Generales on 4 May and ruled as an absolute monarch. These events foreshadowed the long conflict between liberals and traditionalists that marked Spanish history in the 19th and early 20th centuries.

The Cádiz cortes declared that the people of Spain have the sovereignty of all kingdoms of the Monarchy of Spain (including those of the Crown of Castile in the Americas) and proclaimed the extinction of the system of kingdoms and provinces of Spain and the Indies. The Criollo people of Latin America rejected the pretensions of the Spaniards and assumed the sovereignty of the American kingdoms of the Crown of Castile, over which the King of Spain had before been sovereign.[8]

Spain's American colonies took advantage of the postwar chaos to proclaim their independence. Most established republican governments. The fact that the Constitution was considered too liberal by the conservative elements in the colonies only precipitated their decision to join the effort for independence from Spain. When Ferdinand was restored to the throne in Madrid, he expended wealth and manpower in a vain effort to reassert control over the colonies. The move was unpopular among liberal officers assigned to the American wars. By the second half of 1826 only Cuba and Puerto Rico remained under the