The Cádiz Expedition of 1625 was a naval expedition against Spain by English and Dutch forces. The plan was put forward because after the Dissolution of the Parliament of 1625, the Duke of Buckingham, Lord High Admiral, wanted to undertake an expedition that would match the exploits of the raiders of the Elizabethan era and in doing so, would return respect to the country and its people after the political stress of the preceding years.[4]

Following an abortive trip to Spain by Prince Charles and the Duke of Buckingham to propose a marriage between Charles and the Spanish Infanta Maria Anna of Spain, the two switched positions and began advocating war with Spain. They persuaded King James to summon a new parliament which would be invited to advise on foreign policy. The resulting parliament of 1624 was (at least in the short run) a triumph for Charles and Buckingham, as it strongly advocated war with Spain.

However, James had a dilemma stemming from mutual distrust between himself and parliament. He feared that if he went to war, parliament would find an excuse to avoid providing the finance to support it. Parliament, on the other hand, feared that if they voted the finances, the king would find an excuse not to go to war. James died shortly afterwards, leaving foreign policy in the hands of Charles, who rather naively assumed that if he followed the policy parliament had advocated, it would provide the funds for it.

War was duly declared on Spain, and Buckingham began the preparations. The planned expedition involved several elements, including overtaking Spanish treasure ships coming back from the Americas loaded with gold and silver, and then assaulting Spanish towns, with the intention of causing stress within Spain's economy and weakening the Spanish supply chain and resources in regards to the Electorate of the Palatinate.[4]

By October 1625, approximately 100 ships and a total of 15,000 seamen and soldiers had been readied for the Cádiz Expedition. An alliance with the Dutch had also been forged, and the new allies agreed to send an additional 15 warships commanded by William of Nassau, to help guard the English Channel in the absence of the main fleet. Sir Edward Cecil, a battle-hardened soldier fighting for the Dutch, was appointed commander of the expedition by the Duke of Buckingham. This choice of commander was ill-judged, because, while Cecil was a good soldier, he had little knowledge of the sea.[4]

The expedition began on 6 October 1625, but the voyage was plagued with difficulties. Stormy weather threatened the ships, rendering many of them barely seaworthy and causing major delays. By the time the fleet escaped from the storms and arrived in Spanish waters, it had become apparent that they were too poorly supplied to conduct the mission properly, and that they were too late to engage the West Indian treasure fleet, due to the storms they had encountered;[4] in any case, the treasure fleet had used a more southernly passage than usual.

Cecil chose to assault the Spanish city of Cádiz and, after successfully sailing to the Cádiz bay and landing his force, he was able to take the fort that guarded the harbour of the city. However, he soon found that the actual city had been heavily fortified with modern defences, and then began to make serious errors. Spanish vessels that were open to capture were able to get away because most of his forces waited for orders and did not act. The Spanish ships then sailed to the safety of Puerto Real (Port Royal).[1]

The ships used in the assault were also largely merchant vessels conscripted and converted for warfare, and the captains or owners of these ships, overly concerned about the welfare of their ships, left much of the battle to the Dutch.[1] 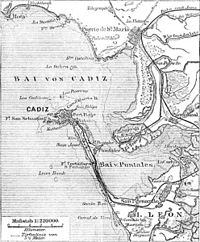 The attack on and capture of Fort Puntel proved a mistake, as the fort did not need to be captured to be able to attack Cádiz.[1]

When Cecil landed his forces, they realised that they had no food or drink with them. Cecil then made the foolish decision to allow the men to drink from the wine vats found in the local houses. A wave of drunkenness ensued, with few or none of Cecil's force remaining sober. Realizing what he had done, Cecil took the only course left open to him, and ordered that the men return to their ships and retreat.[1] When the Spanish army arrived, they found over 1,000 English soldiers still drunk: although every man was armed, not a single shot was fired as the Spanish put them all to the sword.[2]

After the embarrassing fiasco of Cádiz, Cecil decided to try to intercept a fleet of Spanish galleons that were bringing resources back from the New World. This failed as well, because these ships had been warned of danger in the waters, so were able to take another route and were able to return home without any trouble from Cecil or his ships.[1]

Disease and sickness was sweeping through the ranks and, since the ships were in a bad state, Cecil finally decided that there was no alternative but to return to England, having captured few or no goods, and having made little impact on Spain. So, in December, the fleet returned home. The expedition cost the English an estimated £250,000.[1]

The failure of the attack had serious political repercussions in England. King Charles, to protect his own dignity and his favourite, Buckingham (who should have at least made sure the ships were well supplied), made no effort to enquire about the failure of the expedition. He turned a blind eye, instead interesting himself in the plight of the Huguenots of La Rochelle.[4] The House of Commons was less forgiving. The parliament of 1626 began the process of impeachment against the Duke. Eventually, Charles I chose to dissolve parliament rather than risk a successful impeachment.