The Cévennes (Occitan: Cevenas) are a range of mountains in south-central France, covering parts of the départements of Ardèche, Gard, Hérault and Lozère.

The word Cévennes comes from the Gaulish Cebenna, which was Latinized by Julius Caesar to Cevenna. The Cévennes are named Cemmenon (Κέμμενων) in Strabo's Geographica.

In French, the adjective derived from "Cévennes" is Cévenol (fem. Cévenole), as in d'Indy's Symphonie Cévenole, a composer of Ardèche origin (known in English as his "Symphony on a French Mountain Air"). The mountain range also gives its name to a meteorological effect when cold air from the Atlantic coast meets warm air of southern winds from the Mediterranean and causes heavy autumnal downpours, often leading to floods. These are called épisodes cévenols. 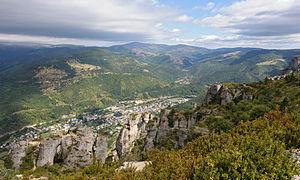 The Cévennes are a part of the Massif Central. They run from southwest (Cause Noire) to northeast (Monts du Vivarais), with the highest point being the Mont Lozère (1702m). Another notable peak is the Mont Aigoual (1567m). The Loire and Allier flowing towards the Atlantic ocean, as well as the Ardèche and tributary Chassezac, Cèze, the different Gardons to the Rhône, Vidourle, Hérault and Dourbie rivers that flow to the Mediterranean Sea, have their headwaters in the Cévennes. Cévennes National Park was created in the region in 1970 and the Parc Naturel Régional des Monts d'Ardèche also preserves some of the natural areas. Two canyons are near the region: the Gorges de la Jonte (the Jonte River gorge) and the Gorges du Tarn (the Tarn River gorge).

In the 21st century, the region still has a large community of French Protestants. They identify as Huguenots, descendants of peoples who have inhabited the mountains since before the 16th century. During the reign of Louis XIV, much of the Huguenot population fled France, particularly following the revocation of the Edict of Nantes in 1685. The Protestant community in the Cévennes largely remained in place, protected from attack by the hilly terrain. This area became a refuge from persecution for other Huguenots during the time.

In 1702, this Huguenot population, dubbed the Camisards, rose up against the monarchy to protect their religious freedom.[1] The two sides agreed to peace in 1715, which enabled the local Protestant Huguenot population to continue living in the Cévennes. Their descendants have continued to live there to the present day.

In World War II, many Huguenots in the village of Le Chambon-sur-Lignon helped save many Jews. They hid them in the vicinity or helped them get out of Vichy France.

In 2005, the French boutique car maker PGO introduced a model named for the region.[2][3]