Tuồng cải lương or cải lương in short, which can be roughly translated as "reformed theater" or "renovated theater" in English, is a form of modern folk opera in Vietnam. It blends southern Vietnamese folk songs, classical music, hát tuồng (a classical theatre form based on Chinese opera), and modern spoken drama. They are on DVD but some on DVD could copied from VHS since the format

It originated in Southern Vietnam in the early 20th century, and blossomed in the 1930s as a theatre of the middle class during the country's French colonial period. Cải lương is now promoted as a national theatrical form. Unlike the other folk forms, it continued to prove popular with the masses as late as the 1970s and the 1980s, although it is now in decline.[1][2]

Cải lương can be compared to a sort of play with the added aspect of Vọng cổ. This term literally means "nostalgia for the past", it is a special type of singing with the background music often being the đàn tranh zither or the đàn ghi-ta (Vietnamized guitar). In a typical cải lương play, the actresses and actors would use a combination of regular spoken dialogue and vọng cổ to express their thoughts and emotions. 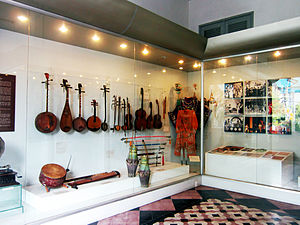 Cải lương tuồng cổ. The actor/actress dress old fashion costume. The plot is based on tale, legend or hictory story of the feudal system, where kings and warriors still existed. For example, Bên Cầu Dệt Lụa, Lục Vân Tiên, Tiếng Trống Mê Linh etc. Many plots come from huge source of Chinese historic/ancient legends. Lương Son Bá-Chúc Anh Đài is based on the Chinese legend of butterfly lovers. In Cải lương tuồng cổ, Hồ Quảng a kind of Chinese opera may be mixed. Hence, some Cải lương tuồng cổ may be called Cải lương Hồ Quảng, which is more like a musical. In addition to regular speech, ca cải lương, and Vọng cổ, several melodies are incorporated into the play . These melodies are reused through different plays, however the words are changed to fit the context of the plays. Cải lương tuồng cổ can be characterized by beautiful, elaborate costumes comprising beautiful and colorful dress pieces; large, beautiful glittery hairpieces; elaborate warrior armor; and elaborate warrior head pieces.