The de Havilland Canada DHC-4 Caribou (designated by the United States military as the CV-2 and later C-7 Caribou) is a Canadian-designed and produced specialized cargo aircraft with short takeoff and landing (STOL) capability. The Caribou was first flown in 1958 and although mainly retired from military operations, is still in use in small numbers as a rugged "bush" aircraft. 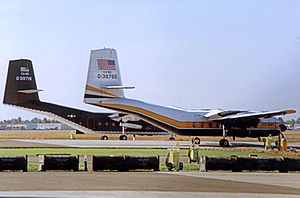 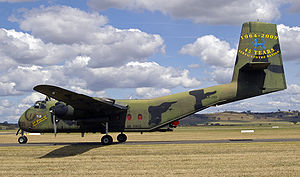 The de Havilland Canada company's third STOL design was a big step up in size compared to its earlier DHC Beaver and DHC Otter, and was the first DHC design powered by two engines. The Caribou, however, was similar in concept in that it was designed as a rugged STOL utility aircraft. The Caribou was primarily a military tactical transport that in commercial service found itself a small niche in cargo hauling. The United States Army ordered 173 in 1959 and took delivery in 1961 under the designation AC-1, which was changed to CV-2 Caribou in 1962.

The majority of Caribou production was destined for military operators, but the type's ruggedness and excellent STOL capabilities requiring runway lengths of only 1200 feet (365 metres)[1] also appealed to some commercial users. U.S. certification was awarded on 23 December 1960. Ansett-MAL, which operated a single example in the New Guinea highlands, and AMOCO Ecuador were early customers, as was Air America, (a CIA front in South East Asia during the Vietnam War era for covert operations). Other civil Caribou aircraft entered commercial service after being retired from their military users.

Today only a handful are in civil use. 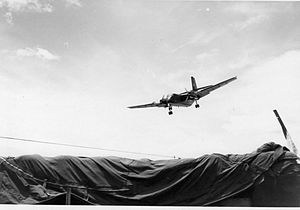 In response to a U.S. Army requirement for a tactical airlifter to supply the battlefront with troops and supplies and evacuate casualties on the return journey, de Havilland Canada designed the DHC-4. With assistance from Canada's Department of Defence Production, DHC built a prototype demonstrator that flew for the first time on 30 July 1958.

Impressed with the DHC4's STOL capabilities and potential, the U.S. Army ordered five for evaluation as YAC-1s and went on to become the largest Caribou operator. The AC-1 designation was changed in 1962 to CV-2, and then C-7 when the U.S. Army's CV-2s were transferred to the U.S. Air Force in 1967. U.S. and Australian Caribous saw extensive service during the Vietnam War.

The U.S. Army purchased 159 of the aircraft and they served their purpose well as a tactical transport during the Vietnam War, where larger cargo aircraft such as the Fairchild C-123 Provider and the Lockheed C-130 Hercules could not land on the shorter landing strips. The aircraft could carry 32 troops or two Jeeps or similar light vehicles. The rear loading ramp could also be used for parachute dropping (also, see Air America).

Under the Johnson-McConnell agreement of 1966, the Army relinquished the fixed wing Caribou to the United States Air Force in exchange for an end to restrictions on Army rotary wing operations. On 1 January 1967, the 17th, 57th, 61st, 92nd, 134th, and 135th Aviation Companies of the U.S. Army were inactivated and their aircraft transferred respectively to the newly activated 537th, 535th, 536th, 459th, 457th, and 458th Troop Carrier Squadrons of the USAF. On 1 August 1967 the "troop carrier" designations were changed to "tactical airlift".

Some U.S. Caribou were captured by North Vietnamese forces and remained in service with that country through to the late 1970s. Following the war in Vietnam, all USAF Caribous were transferred to Air Force Reserve and Air National Guard airlift units pending their replacement by the C-130 Hercules in the 1980s. 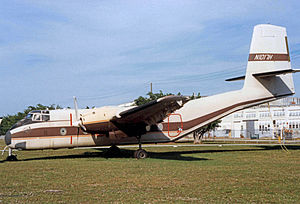 All C-7s have now been phased out of U.S. military service, with the last example serving again under U.S. Army control through 1985 in support of the U.S. Army's Golden Knights parachute demonstration team. Other notable military operators included Australia, Brazil, Canada, India, Malaysia and Spain.

The Royal Australian Air Force retired its last Caribou, A4-140, on 27 November 2009.[2] The aircraft, which was manufactured in 1964, was donated to the Australian War Memorial, Canberra.[3]

After retirement from military use, several examples of the Caribou have been purchased by civilian operators for deployment in areas with small airfields located in rugged country with few or poor surface transport links. 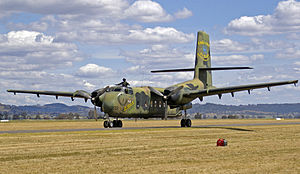 DHC-4A Caribou
Similar to the DHC-4, but this version had an increased takeoff weight.
DHC-4T Turbo Caribou
A conversion of the baseline DHC-4 Caribou powered by the PWC PT6A-67T turboprop engines designed, test flown and certified by the Pen Turbo Aviation company. 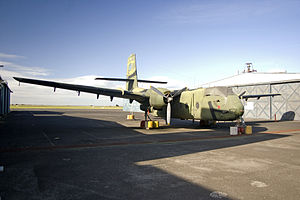 Caribou at the RAAF museum. 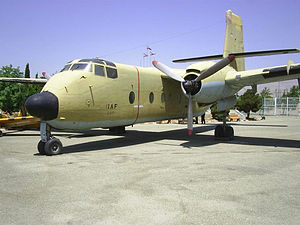 The only Iranian DHC-4 Caribou 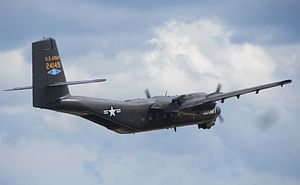 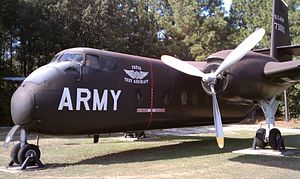 C-7 on display at the 82nd Airborne Division War Memorial Museum, once used by the Golden Knights parachute team