From Infogalactic: the planetary knowledge core
(Redirected from CC-106)
Jump to: navigation, search

The Canadair CL-44 was a Canadian turboprop airliner and cargo aircraft based on the Bristol Britannia that was developed and produced by Canadair in the late 1950s and early 1960s. Although innovative, only a small number of the aircraft were produced for the Royal Canadian Air Force (RCAF) (as the CC-106 Yukon), and for commercial operators worldwide.

The aircraft is named after the Canadian Yukon territory.

In the 1950s, Canadair had acquired a licence to build the Bristol Britannia airliner. Their first use of the licence was to build the heavily modified Canadair CL-28 Argus patrol aircraft (RCAF designation CP-107) that combined the Britannia's wings and tail sections with a new fuselage and engines. The resulting aircraft had lower speed and altitude, but had two bomb bays and greatly extended loiter times. 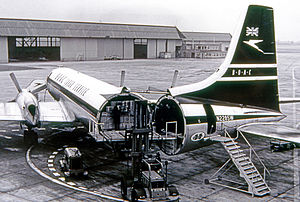 Loading a Canadair CL-44 at Manchester in 1963 with the fuselage swung open. This aircraft was operated by BOAC on charter from Seaboard World Airlines

With an RCAF requirement for a replacement for its C-54GM North Star (an extensive redesign of the Douglas C-54 Skymaster, that among many changes, was powered by Merlin engines) fleets, Canadair began work on a long range transport primarily intended to provide personnel and logistics support for Canadian Forces in Europe. In January 1957 Canadair received a contract for eight aircraft, later increased to 12. The RCAF designation for the new design was the CC-106 Yukon, while the company's civilian variant was known as the CL-44-6. In company parlance the CL-44 was simply "the Forty-Four."

The RCAF had specified the CL-44 to be equipped with Bristol Orion engines. When the British Ministry of Supply canceled the Orion program, the RCAF revised the specifications to substitute the Rolls-Royce Tyne 11. The CL-44 fuselage was lengthened making it 12 ft 4 in (3.75 m) longer than the Britannia 300 with two large cargo doors added on the port side on some aircraft, while the cabin was pressurised to maintain a cabin altitude of 2,400 m at 9,000 m (30,000 ft). The design used modified CL-28 wings and controls. The Yukon could accommodate 134 passengers and a crew of nine. In the casualty evacuation role it could take 80 patients and a crew of 11.

The rollout of the Yukon was a near-disaster when the prototype could not be pushed out of the hangar since the tail was unable to clear the hangar doors.[citation needed] The first flight took place 15 November 1959 at Cartierville Airport. During test flights many problems were encountered from complete electrical failure to engines shaking loose and almost falling off. Rolls-Royce had problems delivering engines, resulting in the sarcastically-named "Yukon gliders" being parked outside Canadair as late as 1961.[citation needed] 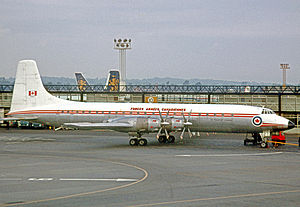 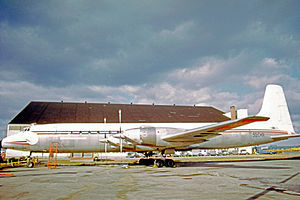 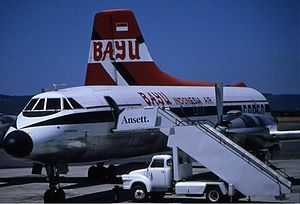 Initially, the CL-44-6 was produced for the RCAF as the CC-106 Yukon. Once initial problems were resolved, in RCAF service the Yukon performed well and in December 1961, a Yukon set a world record for its class when it flew 6,750 mi (10,860 km) from Tokyo to RCAF Station Trenton, Ontario, in 17 hours, three minutes at an average speed of 400 mph (640 km/h). Later, a Yukon set a new record staying airborne for 23 hours and 51 minutes. These records were unbroken until bettered by the Boeing 747SP in 1975. By the time of their retirement, Yukons had flown 65 million miles, 1.5 billion passenger miles and 360 million ton-miles.

The CL-44D4 was briefly considered for purchase by the United States Air Force in the 1960s but the project was never culminated due to political backlash in Canada and the United States.[1] The USAF purchase of the CL-44 was complicated by two factors. It came in the aftermath of the cancellation of the Avro Canada CF-105 Arrow and involved a "swap deal" wherein 100 McDonnell F-101 Voodoo fighters were obtained in return for a contract for 232 CL-44-D4 transports for the Military Air Transport Service (MATS). The political controversy that resulted led to problems for both a Quebec-based company receiving a contract so soon after an Ontario-based company had lost a major contract. The USAF also quickly found that buying a foreign aircraft was not easy when American companies wanted the business and relinquished the contract to Canadair, awarding an order to Boeing for the KC-135 Stratotanker.

On the cargo aircraft variant CL-44D4 the entire tail section hinged. It could be opened using hydraulic actuators to load large items quickly. An inflatable seal at the hinge-break enabled cabin pressure to be maintained, and eight hydraulic-operated locks assured structural integrity. The tail could be opened from controls within the tail in 90 seconds. The flight controls at the joint were maintained by a system of push pads.

The CL-44D4 was the first large aircraft to be able to "swing" its tail, although some small naval aircraft had this feature to ease storage. These, however, required rigging before flight. There were only four original customers who bought and operated the CL-44D4.

Loftleiðir was the only passenger operator of the CL-44J, variant of CL-44D4 stretched on request by Canadair. It was the largest passenger aircraft flying over the Atlantic ocean at that time. Loftleiðir marketed the CL-44J under the name "Rolls-Royce 400 PropJet". This led to the confusion that the CL-44J is sometimes referred to as the Canadair-400. Loftleiðir Icelandic Airlines merged with Air Iceland in 1973 and became today's Icelandair.

In 1981 a Baku, Azerbaijan-based Soviet Union interceptor deliberately rammed an Argentine Canadair CL-44 from Transporte Aéreo Rioplatense, killing the three Argentines and one Briton on board; the aircraft was delivering arms from Israel to Iran.[2]

CL-44-6
Version built for the Royal Canadian Air Force as the CC-106 Yukon, 12 built
CL-44D4-1
Civil, commercial cargo aircraft, civil prototype and production aircraft for Seaboard World Airlines, eight built.
CL-44D4-2
Civil, commercial cargo aircraft originally built for Flying Tiger Line, 13 built.
CL-44D4-6
Civil, commercial cargo aircraft originally built for Slick Airways, four built.
CL-44D4-8
Civil aircraft for Loftleidir, two built
CL-44J
Four CL-44D4 aircraft stretched by Canadair on request of Icelandic Airlines Loftleiðir, with a section, 10 ft 1 in (3.07 m) forward of the wing, and another section of 5 ft 1 in (1.55 m) aft of the wing. This enabled the installation of 29 extra seats, bringing the capacity to 189 passengers. The maximum take-off weight stayed the same since the extra weight was compensated by removing the center wing tanks. Therefore it can be said that the stretch was a trade of capacity for range.
CL-44-O
Also known as the Skymonster and CL-44 Guppy. The CL-44-O was a single CL-44D4-2 (c/n 16) converted by Conroy Aircraft, who removed the fuselage shell above the floorline, and rebuilt an enlarged fuselage to make it into a Guppy-type aircraft. It was intended to transport Rolls-Royce RB211 engine pods to the United States for Lockheed's L-1011 Tristar.

Four original customers who bought and operated the CL-44D4 were: Seaboard World Airlines, The Flying Tiger Line, Slick Airways and the Icelandic Airlines Loftleiðir. All other operators operated second-hand aircraft. 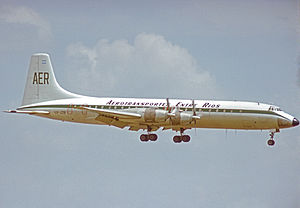 CC.106 of Aerotransportes landing at Miami in 1976

The CC-106 Yukons retired in March 1971 and were replaced by the Boeing 707 (CC-137). The Yukons might have served longer with the Canadian Forces Air Transport Command but for two factors: the need for an aircraft which could operate as an in-flight refueling tanker, and the chronic shortage and high cost of spares, the latter resulting because the CL-44 had never gone into large-scale production. All Yukons were sold to South American and African operators as they could not be registered in Northern America or Europe since the Britannia windshields did not meet new security standards.[5] The CC-106 had the original Bristol Britannia windshield and, on its retirement from RCAF operations, the cost of conversion was estimated at $250,000.00 per unit, cost alone precluding its use in North America and Europe. In 1974, a special exclusion was granted for the CC-106 (Cargo) for civil operations in Canada.

In commercial operations, the CL-44 proved to be an extremely profitable aircraft to run with a fuel burn half that of a Boeing 707. The CL-44 burned 5,500 pounds of fuel (less when operating at its higher flight levels) per hour. This fuel consumption and its fuel tanks capacity (80,800 lb) gave 15 hours and longer in the air, cruising at an airspeed of 300 kts. It had a payload of 27 metric tons. After 40 years, out of the 39 aircraft built, 18 had either crashed or been destroyed in operation, 13 had been cut up, and two (including the Guppy) remain more or less operational. The remaining eight aircraft are parked around the world or have already been scrapped. Not a single CL-44 had been conserved or been prepared for a museum although the Ecuadorian Air Force salvaged #13 for eventual display at a new aviation museum in Guayaquil, Ecuador. The Guppy "Skymonster" CL 44 was flown by the CL-44 Association from the U.S.A. to Great Britain to be preserved. As of 2010, it remains complete at Bournemouth (Hurn) Airport, England. As of 2013[update], this aircraft has been restored for flight and is currently undergoing ground engine runs.