From Infogalactic: the planetary knowledge core
(Redirected from CC-115)
Jump to: navigation, search

The de Havilland Canada DHC-5 Buffalo is a short takeoff and landing (STOL) utility transport, a turboprop aircraft developed from the earlier piston-powered DHC-4 Caribou. The aircraft has extraordinary STOL performance and is able to take off in distances much shorter than even light aircraft can manage.

The Buffalo arose from a 1962 United States Army requirement for a STOL transport capable of carrying the same payload as the CH-47A Chinook helicopter.[1] De Havilland Canada based its design to meet the requirement on an enlarged version of its DHC-4 Caribou, already in large-scale service with the United States Army, to be powered by General Electric T64 turboprops rather than the Pratt & Whitney R-2000 piston engines of the Caribou. (It had already flown a T-64 powered Caribou on 22 September 1961).[1] 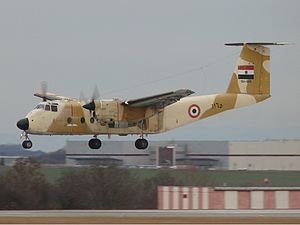 De Havilland's design, the DHC-5 Buffalo, was chosen as the winner of the United States Army competition in early 1963, with four DHC-5s, designated YAC-2 (later CV-7A and subsequently C-8A) ordered.[2] The first of these aircraft made its maiden flight on 9 April 1964.[3] All four aircraft were delivered in 1965, the Buffalo carrying nearly twice the payload as the Caribou while having better STOL performance. The prototype CV-7A was exhibited by the manufacturer at the 1965 Paris Air Show wearing US Army markings. No further US orders followed, however, as at the start of 1967, inter-service politics lead to large fixed-wing transports being transferred to the United States Air Force,[2] who considered themselves adequately equipped with the Fairchild Aircraft C-123 Provider.

In the early 1980s, de Havilland Canada attempted to modify the Buffalo for civilian use. The aircraft was to be branded as the "Transporter." After loss of the demonstration aircraft (SN 103 C-GCTC) at the 1984 Farnborough Airshow, the project was abandoned.[citation needed] 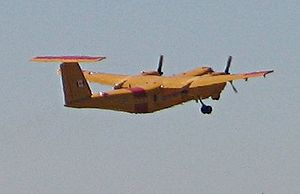 A DHC-5 Buffalo taking off

In the early 1970s, a NASA C-8A Buffalo (nicknamed Bisontennial in 1976) was fitted with a short-span Boeing wing incorporating split-flow turbofan engines based on the Rolls-Royce Spey (providing both propulsion and augmentor airflow for the powered lift system).[6][7][8][9] Beginning in 1972 with its first flight in this experimental configuration, this aircraft was used jointly by the NASA Ames Research Center and the Canadian Department of Industry, Trade and Commerce for STOL research.[8][10] 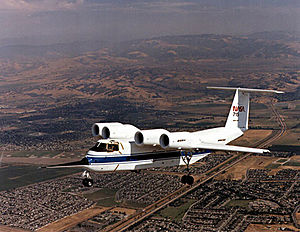 Its experimental wing was designed, fabricated and installed by Boeing, and was a swept, supercritical design incorporating a boundary layer control system.[12][13]:8 Instead of the standard engines, this aircraft was powered by four prototype Avco Lycoming YF102 high-bypass turbofan engines (originally from the Northrop YA-9 program) mounted above the wing to take advantage of the Coandă effect.[13]:9–10 In 1980, this aircraft participated in carrier trials aboard USS Kitty Hawk, demonstrating STOL performance without the use of catapults or arrestor gear.[7][11]:154

On February 24, 2006, Viking Air of Victoria, British Columbia, a manufacturer of replacement parts for all out-of-production de Havilland Canada aircraft, purchased the type certificates from Bombardier Aerospace for all versions of the DHC-1 through DHC-7 series aircraft, giving Viking exclusive rights to manufacture and sell new aircraft of those types. In December 2008, Viking Air indicated their intention to put the Buffalo series back into production at their home factory in Victoria, British Columbia or in Calgary, Alberta. The new production Buffalo features Pratt & Whitney Canada PW150 turboprops, a glass cockpit, enhanced vision and night vision goggle capability. The company intends to propose the aircraft as a replacement for the Royal Canadian Air Force fleet of existing DHC-5As,[15] and says it has received extensive interest in the type, including several letters of intent for the DHC-5NG.[16]

In late 1965, one of the prototype DHC-5s operated by the U.S. Army was deployed to Bien Hoa Air Base in South Vietnam for a three-month evaluation period, assigned to the 2nd Flight Platoon of the 92nd Aviation Company.[17]

The Royal Canadian Air Force (merged into the Canadian Forces in 1968) first acquired 15 DHC-5A designated as CC-115 for tactical transports. These were initially operated at CFB St Hubert, QC by No. 429 Squadron in a tactical aviation role as part of Mobile Command. In 1970, the Buffalo aircraft were transferred to a transport and rescue role with No. 442 Squadron, No. 413 Squadron and No. 424 Squadron as part of Transport Command. No. 426 Squadron also flew the aircraft for training. Some were leased back or loaned back to the factory for trials and eventually returned to military service.

Three of the aircraft were also deployed on UN missions to the Middle East with No. 116 Transport Unit until 1979. They had a white paint scheme which was retained while they were serving in domestic transport with 424 Sqn in between deployments. On 9 August 1974, Canadian Forces CC-115 Buffalo 115461 was shot down by a Syrian surface-to-air missile, killing all nine CF personnel on board. This represents the single biggest loss of Canadian lives on a UN mission as well as the most recent Canadian military aircraft to be shot down.

In 1975, the Buffalo dropped its tactical transport role and was converted to domestic search and rescue, except for a few that kept serving on UN missions. The initial paint scheme for the SAR converted aircraft were white and red while others still had the original drab paint. The previous drab paint and white paint were eventually replaced with the distinctive yellow and red scheme commonly seen today. The number of aircraft have been reduced to eight, with six on active service, one in storage (recently dismantled) and one used for battle damage training. The remaining operational Buffalos operate in the Search and Rescue role for No. 442 Squadron at CFB Comox. Air Command was renamed the Royal Canadian Air Force in 2011, meaning the CC-115 has served with the RCAF, Air Command and now the RCAF once again. The Buffalo was replaced by the CC-130 Hercules aircraft at search-and-rescue bases in CFB Greenwood and CFB Trenton. The EADS CASA C-295 or Alenia C-27J Spartan were seen as the likely replacements for the Buffalo in Canadian Forces. The C-27J has been considered for a sole-source contract by the Government of Canada.[18]

There are currently two Buffalo aircraft used commercially in Canada. They are operated by Summit Air, Yellowknife, Northwest Territories.[20] 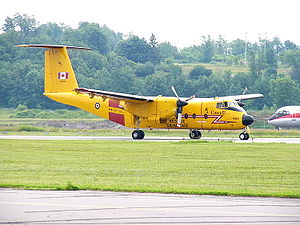 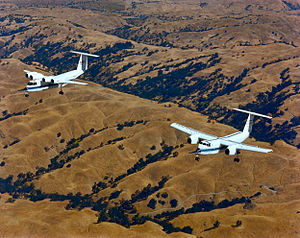 The two NASA QSRA aircraft on their delivery flight after conversion 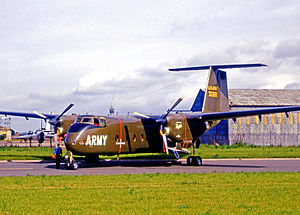 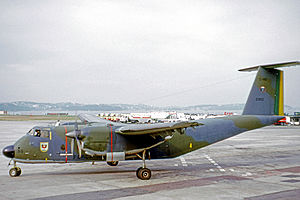 Democratic Republic of the Congo (previously

In total, 26 accidents involving hull losses have been recorded.