The Sea Knight was also the U.S. Navy's standard medium-lift utility helicopter until it was phased out in favor of the MH-60S Knighthawk in the early 2000s. Canada also operated the Sea Knight, designated as CH-113, and operated them in the SAR role until 2004. Other export customers include Japan, Sweden, and Saudi Arabia. The commercial version is the BV 107-II, commonly referred to simply as the "Vertol".

Piasecki Helicopter was a pioneering developer of tandem-rotor helicopters, with the most famous previous helicopter being the H-21 "Flying Banana". Piasecki Helicopter became Vertol in 1955 and work began on a new tandem rotor helicopter designated the Vertol Model 107 or V-107 in 1956. The V-107 prototype had two Lycoming T53 turboshaft engines, producing 877 shp (640 kW) each.[2] The first flight of the V-107 took place on 22 April 1958.[3] The V-107 was then put through a flight demonstration tour in the United States and overseas. In June 1958, the U.S. Army awarded a contract to Vertol for ten production aircraft designated "YHC-1A".[4] 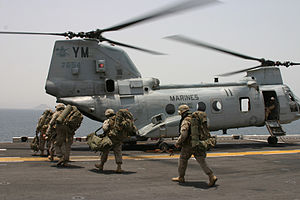 The order was later decreased to three, so that the Army could divert funds for the V-114, also a turbine powered tandem, but larger than the V-107.[4] The Army's three YHC-1As were powered by GE-T-58 engines. The YHC-1As first flew in August 1959, and were followed by an improved commercial/export model, the 107-II.[1] During 1960, the U.S. Marine Corps evolved a requirement for a medium-lift, twin-turbine troop/cargo assault helicopter to replace the piston-engined types then in use.[5] That same year Boeing acquired Vertol and renamed the group Boeing Vertol.[4] Following a competition, Boeing Vertol was selected to build its model 107M as the HRB-1, early in 1961.[1] In 1962 the U.S. Air Force ordered 12 XCH-46B Sea Knights with the XH-49A designation, but later cancelled the order due to a delivery delay and opted for the Sikorsky S-61R instead.[6]

Production of the improved CH-46D followed with deliveries beginning in 1966. Its improvements included modified rotor blades and more powerful T58-GE-10 turboshaft engines[1] rated at 1,400 shp (1,040 kW) each. The increased power allowed the D-model to carry 25 troop or 7,000 pounds (3,180 kg) of cargo.[7] The CH-46D was introduced to the Vietnam theater in late 1967, supplementing the U.S. Marine Corps' existing unreliable and problematic CH-46A fleet.[8] Along with the USMC's CH-46Ds, the U.S. Navy received a small number of UH-46Ds for ship resupply.[9] Also, approximately 33 CH-46As were upgraded to CH-46Ds.[7] 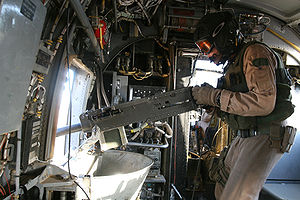 The Marines also received CH-46Fs from 1968 to 1971. The F-model retained the D-model's T58-GE-10 engines but revised the avionics and included other modifications. The CH-46F was the final production model.[1] The Sea Knight has undergone upgrades and modifications. Most of the U.S. Marine Corps' Sea Knights were upgraded to CH-46E standard. The CH-46E features fiberglass rotor blades, airframe reinforcement, and further uprated T58-GE-16 engines producing 1,870 shp (1,390 kW) each. Some CH-46Es have been given double fuel capacity.[7] The Dynamic Component Upgrade (DCU), incorporated starting in the mid-1990s, provides for increased capability through strengthened drive systems and rotor controls.[citation needed]

The commercial variant, the BV 107-II, was first ordered by New York Airways in 1960. They took delivery of their first three aircraft, configured for 25 passengers, in July 1962.[5] In 1965, Boeing Vertol sold the manufacturing rights of the 107 to Kawasaki Heavy Industries. Under this arrangement, all Model 107 civilian and military aircraft built in Japan are known as KV 107.[5] On 15 December 2006, Columbia Helicopters, Inc acquired the type certificate for the Boeing Vertol 107-II, and is in the process of acquiring a Production Certificate from the FAA. Plans for actual production of the aircraft have not been announced.[5] 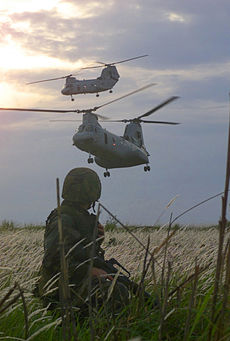 The CH-46 has tandem counter-rotating rotors powered by two GE T58 turboshaft engines. The engines are mounted on each side of the rear rotor pedestal with a driveshaft to the forward rotor. The engines are coupled so either could power both rotors in an emergency. The rotors feature three blades and can be folded for on-ship operations.[7] The CH-46 has fixed tricycle landing gear, with twin wheels on all three landing gear legs. The gear configuration causes a nose-up stance to facilitate cargo loading and unloading. The main gear are fitted in rear sponsons that also contain fuel tanks with a total capacity of 350 US gallons (1,438 L).[7]

The CH-46 has a cargo bay with a rear loading ramp that could be removed or left open in flight for extended cargo or for parachute drops. An internal winch is mounted in the forward cabin and can be used to pull external cargo on pallets into the aircraft via the ramp and rollers. A belly sling hook (cargo hook) which is usually rated at 10,000 lb (4,500 kg). could be attached for carrying external cargo. Although the hook is rated at 10,000 lb (4,500 kg)., the limited power produced by the engines precludes the lifting of such weight. It usually has a crew of three, but can accommodate a larger crew depending on mission specifics. For example, a Search and Rescue variant will usually carry a crew of five (Pilot, Co-Pilot, Crew Chief, Swimmer, and Medic) to facilitate all aspects of such a mission. A pintle-mounted 0.50 in (12.7 mm) Browning machine gun is mounted on each side of the helicopter for self-defense.[7] Service in southeast Asia resulted in the addition of armor with the guns.[1] Known colloquially as the "Phrog", the Sea Knight was used in all U.S. Marine operational environments between its introduction during the Vietnam War and its frontline retirement in 2014.[11] The type's longevity and reputation for reliability led to mantras such as "phrogs phorever" and "never trust a helicopter under 30".[12] CH-46s transported personnel, evacuated wounded, supplied forward arming and refueling points (FARP), performed vertical replenishment, search and rescue, recovered downed aircraft and crews and other tasks.

During the Vietnam War, the CH-46 was one of the prime US troop transport helicopters in the theatre, slotting between the smaller Bell UH-1 Iroquois and larger Sikorsky CH-53 Sea Stallion. During the 1972 Easter Offensive, Sea Knights saw heavy use to convey US and South Vietnamese ground forces to and around the front lines.[13] CH-46 operations were plagued by major technical problems; the engines, being prone to foreign object damage (FOD) from debris being ingested when hovering close to the ground and subsequently suffering a compressor stall, had a lifespan as low as 85 flight hours; on 21 July 1966, all CH-46s were grounded until more efficient filters had been fitted.[14] By the end of US military operations in Vietnam, over a hundred Sea Knights had been lost to enemy fire.[15]

File:Ch-46e.jpg
U.S. Marines load a simulated casualty onto a CH-46E during convoy operations training in May 2004.

CH-46E Sea Knights were also used by the U.S. Marine Corps during the 2003 invasion of Iraq. In one incident on 1 April 2003, Marine CH-46Es and CH-53Es carried U.S. Army Rangers and Special Operations troops on an extraction mission for captured Army Private Jessica Lynch from an Iraqi hospital.[19] During the subsequent occupation of Iraq and counter-insurgency operations, the CH-46E was heavily used in the CASEVAC role, being required to maintain 24/7 availability regardless of conditions.[20] According to authors Williamson Murray and Robert H Scales, the Sea Knight displayed serious reliability and maintenance problems during its deployment to Iraq, as well as "limited lift capabilities".[21] Following the loss of numerous US helicopters in the Iraqi theatre, the Marines opted to equip their CH-46s with more advanced anti-missile countermeasures.[22]

The U.S. Navy retired the type on 24 September 2004, replacing it with the MH-60S Seahawk;[23] the Marine Corps maintained its fleet as the MV-22 Osprey was fielded.[24] In March 2006 Marine Medium Helicopter Squadron 263 (HMM-263) was deactivated and redesignated VMM-263 to serve as the first MV-22 squadron.[25] The replacement process continued through the other medium helicopter squadrons into 2014. On 5 October 2014, the Sea Knight performed its final service flight with the U.S. Marine Corps at Marine Corps Air Station Miramar. HMM-364 was the last squadron to use it outside the United States, landing it aboard the USS America (LHA-6) on her maiden transit. On 9 April 2015, the CH-46 was retired by the Marine Medium Helicopter Training Squadron 164, the last Marine Corps squadron to transition to the MV-22.[26][27] The USMC retired the CH-46 in a formal ceremony on 1 August 2015.[28]

The Royal Canadian Air Force procured six CH-113 Labrador helicopters for the SAR role and the Canadian Army acquired 12 of the similar CH-113A Voyageur for the medium-lift transport role. The RCAF Labradors were delivered first with the first one entering service on 11 October 1963.[29][30] When the larger CH-147 Chinook was procured by the Canadian Forces in the mid-1970s, the Voyageur fleet was converted to Labrador specifications to undertake SAR missions. The refurbished Voyageurs were re-designated as CH-113A Labradors, thus a total of 15 Labradors were ultimately in service.[30] 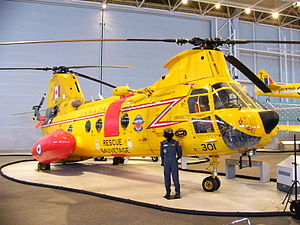 The Labrador was fitted with a watertight hull for marine landings, a 5,000 kilogram cargo hook and an external rescue hoist mounted over the right front door. It featured a 1,110 kilometer flying range, emergency medical equipment and an 18-person passenger capacity. By the 1990s, heavy use and hostile weather conditions had taken their toll on the Labrador fleet, resulting in increasing maintenance costs and the need for prompt replacement.[30] In 1981, a mid-life upgrade of the fleet was carried out by Boeing Canada in Arnprior, Ontario. Known as the SAR-CUP (Search and Rescue Capability Upgrade Program), the refit scheme included new instrumentation, a nose-mounted weather radar, a tail-mounted auxiliary power unit, a new high-speed rescue hoist mounted over the side door and front-mounted searchlights. A total of six CH-113s and five CH-113As were upgraded with the last delivered in 1984.[30]

In 1992, it was announced that the Labradors were to be replaced by 15 new helicopters, a variant of the AgustaWestland EH101, designated CH-149 Chimo. The order was subsequently cancelled by the Jean Chrétien Liberal government in 1993, resulting in cancellation penalties, as well as extending the service life of the Labrador fleet. However, in 1998, a CH-113 from CFB Greenwood crashed on Quebec's Gaspé Peninsula while returning from a SAR mission, resulting in the deaths of all crewmembers on board. The crash placed pressure upon the government to procure a replacement, thus an order was placed with the manufacturers of the EH101 for 15 aircraft to perform the search-and-rescue mission, designated CH-149 Cormorant. CH-149 deliveries began in 2003, allowing the last CH-113 to be retired in 2004.[30] In October 2005 Columbia Helicopters of Aurora, Oregon purchased eight of the retired CH-113 Labradors to add to their fleet of 15 Vertol 107-II helicopters.[31]

In 1963, Sweden procured ten UH-46B from the US as a transport and anti-submarine helicopter for the Swedish armed forces, designated Hkp 4A. In 1973, a further eight Kawasaki-built KV-107, which were accordingly designated Hkp 4B, were acquired to replace the older Piasecki H-21. During the Cold War, the fleet's primary missions were anti-submarine warfare and troop transportation, they were also frequently employed in the search and rescue role. In the 1980s, the Hkp 4A was phased out, having been replaced by the Eurocopter AS332 Super Puma; the later Kawasaki-built Sea Knights continued in operational service until 2011, they were replaced by the UH-60 Black Hawk & NH90. 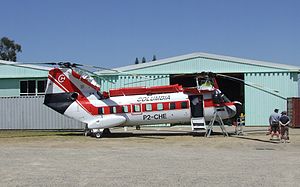 The civilian version, designated as the BV 107-II Vertol,[32] was developed prior to the military CH-46. It was operated commercially by New York Airways, Pan American World Airways and later on by Columbia Helicopters.[32] Among the diversity of tasks was pulling a hover barge,[33][34] and constructing transmission towers for overhead power lines.[35]

In December 2006, Columbia Helicopters purchased the type certificate of the Model 107 from Boeing, with the aim of eventually producing new-build aircraft themselves.[36] 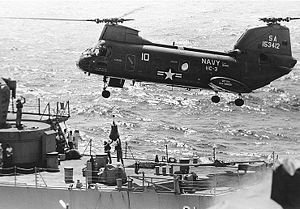 A UH-46D lowers mail to the fantail of USS Decatur CH-113 Labrador landing on "The Clapper", a sea stack off the tip of Bell Island in Newfoundland 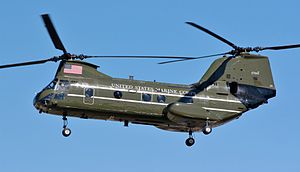 CH-46X
Replacement helicopter based on the Boeing Model 360, this Advance Technology Demonstrator from the 1980s never entered production. The aircraft relied heavily on composites for its construction and had a beefier drive train to handle the twin Avco-Lycoming AL5512 engines (4,200 shp).[41]
XH-49
Original designation of UH-46B. 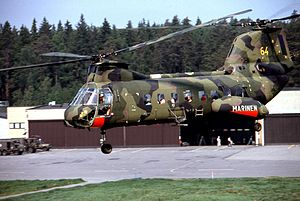 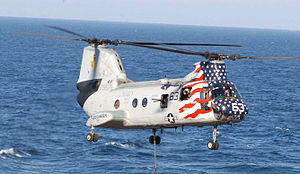 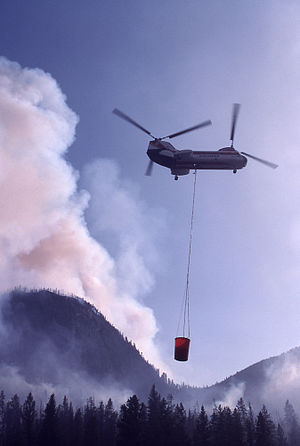 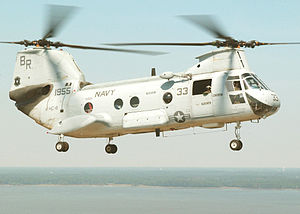 US Navy Sea Knight flies for the final time over Norfolk, Virginia 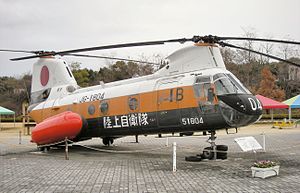 A HKP 4A variant with the Swedish Air Force