CHC Helicopter is a large helicopter services company, specializing in the following services:

CHC Helicopter is headquartered in Richmond, British Columbia, Canada and operates more than 250 aircraft in 30 countries around the world. CHC's major international operating units are based in Australia, Brazil, Ireland, the Netherlands, Norway, and the United Kingdom. The company is one of several global providers of helicopter transportation services to the offshore oil and gas industry (others including Bristow Helicopters). CHC has capabilities in precision flying techniques and technical support.[clarification needed]

CHC has long-term working relationships with most of the major oil and gas companies. CHC operates the marine search and rescue service for the Irish Coast Guard at Shannon, Waterford, Sligo and Dublin airports and provides commercial Search and Rescue helicopter services for the United Kingdom Maritime and Coastguard Agency. CHC provides helicopter services in Australia for the Fire and Emergency Services Authority of Western Australia, Victoria Police and the Ambulance Service of New South Wales. 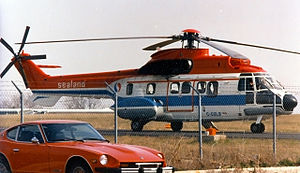 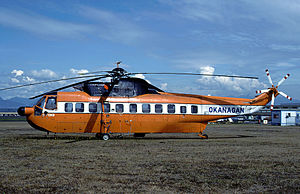 Commercial helicopter flying began in British Columbia in the summer of 1947. Three ex-RCAF officers, pilots Carl Agar and Barney Bent, and engineer Alf Stringer, were operating a fixed-wing charter company, Okanagan Air Services Ltd., from Penticton. In July 1947 they raised enough money to purchase a Bell 47-B3 and pay for their flying and maintenance training.

Okanagan Air Services moved to Vancouver in 1949, renamed Okanagan Helicopters Ltd. By 1954, had become the largest commercial helicopter operator in the world.[citation needed]

In February 2008 all of CHC's shares were purchased by First Reserve, a US private equity company, for CAD$3.7 billion ($3.5 billion). At the time, the word "Corporation" was dropped from the company's name, which is now simply CHC Helicopter. On January 16, 2014 CHC announced an Initial Public Offering of 31,000,000 shares. First Reserve now holds 56.7% of CHC's shares.

CHC manages its global operations through the following divisions: 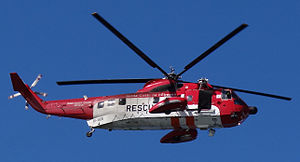 CHC Helicopter serves as the sole provider of Search and Rescue helicopter services to the Irish Coast Guard, where it had operated a fleet of six Sikorsky S-61N helicopters based in Dublin, Shannon, Waterford, and Sligo. This fleet has now been replaced by 5 Sikorsky S-92 Helibus. The S-61N exited service in December 2013 with a flight from Dublin Airport to Weston Aerodrome, West Dublin. The flight was operated by EI-SAR, the oldest S-61N in commercial operation at the time.[4]

CHC currently provides SAR helicopters to two of the four Maritime and Coastguard Agency bases in the UK; Portland, Lee-on-Solent, and until recently also operated from Sumburgh and Stornoway. CHC, as part of the Soteria SAR consortium was selected as the "Preferred Bidder" for a 25-year contract to provide a civilian Search and Rescue service throughout the United Kingdom.[5] However, days before the contract was due to be signed in February 2011, the British Government halted the process after CHC disclosed that it had unauthorised access to commercially sensitive information.[6]

CHC is the largest provider of emergency medical helicopter services in Australia.[citation needed]

helicopter, a new military search and rescue helicopter provided to France, Italy, Germany and The Netherlands through a joint venture shared by Agusta, Eurocopter and Fokker.

CHC provides extensive ship supply and rescue service off the coast of Africa and the Netherlands, and helicopter support services to scientific expeditions in Antarctica and other harsh environments.