From Infogalactic: the planetary knowledge core
Jump to: navigation, search
For other uses, see Cabaret (disambiguation). 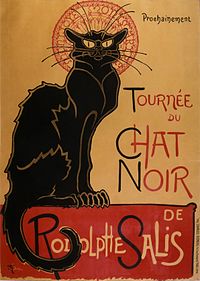 1896 advertisement for a tour of the first French cabaret show, Le Chat Noir.

Cabaret (English pronunciation: /kæbəˈreɪ/) is a form of entertainment featuring music, song, dance, recitation or drama. It is mainly distinguished by the performance venue, such as in a restaurant, pub or nightclub with a stage for performances. The audience, often dining or drinking, does not typically dance but usually sits at tables. Performances are usually introduced by a master of ceremonies or MC (sometimes spelled emcee in the U.S.). The entertainment, as done by an ensemble of actors and according to its European origins, is often (but not always) oriented towards adult audiences and of a clearly underground nature. In the United States, striptease, burlesque, drag shows, or a solo vocalist with a pianist, as well as the venues which house such events, are often advertised as cabarets.

The word cabaret was first used in 1655.[1] It is derived from tavern probably from M.Du. cambret. The word cabaret came to mean "a restaurant or night club" by 1912.[2]

Cabarets existed in Paris in the 16th century; they were ancestors of the modern restaurant. Unlike taverns, they sold wine only with a meal, presented on a tablecloth. Customers might sing if they had drunk enough wine, but early cabarets did not have formal programs of entertainment. They were frequent meeting places for writers and artists. In the 16th century the writers La Fontaine, Moliere and Jean Racine frequented a cabaret called the Mouton Blanc on rue du Vieux-Colombier, and later the Croix de Lorraine, on the modern rue Bourg-Tibourg. In 1773, French poets, painters musicians and writers began to meet in a cabaret called Le Caveau on rue de Buci, where they composed and sang songs. The Caveau continued until 1816, when it was closed because its clients wrote songs mocking the royal government.[3] 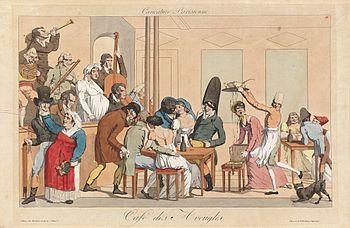 In the 18th century, the café concert or café chantant appeared, which offered food along with music, singers, or magicians. The most famous was the Cafe des Aveugles in the cellars of the Palais Royal, which had a small orchestra of blind musicians. In the early 19th century, many cafés-chantants appeared around the city; the most famous were the Café des Ambassadeurs on the Champs-Élysées (1843) and the Eldorado (1858) on boulevard Strasbourg. By 1900 there were more than 150 cafés chantants in Paris.[4] The first cabaret in the modern sense was Le Chat Noir in the Bohemian neighborhood of Montmartre, created in 1881 by Rodolphe Salis, a theatrical agent and entrepreneur. It combined music and other entertainment with political commentary and satire.[5] The Chat Noir brought together the wealthy and famous of Paris with the Bohemians and artists of Montmartre and the Pigalle. Its clientele was described by the historian Paul Bourget: "a fantastic mixture of writers and painters, of journalists and students, of employees and high-livers, as well as models, prostitutes and true grand dames searching for exotic experiences." [6] The host was Salis himself, calling himself a gentleman-cabaretier; he began each show with a monologue mocking the wealthy, ridiculing the Deputies of the National Assembly, and making jokes about the events of the day. The cabaret was too small for the crowds trying to get in; at midnight on June 10, 1885, Salis and his customers paraded down the street to a larger new club at 12 rue de Laval, which had a decor described as "A sort of Beirut with Chinese influences." The composer Eric Satie earned his living after finishing the Conservatory playing the piano at the Chat Noir.[6] 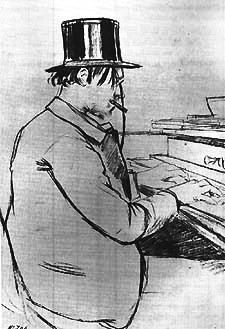 By the end of the century, there were only a few cabarets of the old style remaining where artists and bohemians gathered. They included the Cabaret des noctambules on Rue Champollion on the left bank, the Lapin Agile at Montmartre; and Le Soleil d'or at the corner of the quai Saint-Michel and boulevard Saint-Michel, where poets including Guillaume Apollinaire and André Salmon met to share their work.[8]

The music hall, invented in London, first appeared in Paris in 1862. It offered more lavish musical and theatrical productions, with elaborate costumes, singing and dancing. The theaters of Paris, fearing competition from the music halls, had a law passed by the National Assembly forbidding music hall performers to wear costumes, to dance, wear wigs, and to recite dialogue. The law was challenged by the owner of the music hall Eldorado in 1867, who put a former famous actress from the Comédie-Française on stage to recite verse from Corneille and Racine. The public took the side of the music halls, and the law was repealed.[9] 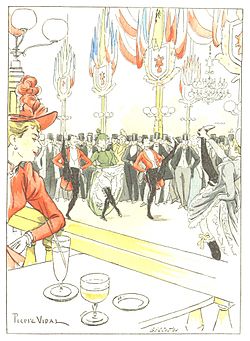 The Moulin Rouge was opened in 1889 by the Catalan Joseph Oller. It was highly visible because of its large red imitation windmill on its roof, and became the birthplace of the dance known as the French Cancan. It helped make famous the singers Mistinguett and Édith Piaf and the painter Toulouse-Lautrec, who made posters for the venue. The Olympia, also run by Oller, was the first to be called a music hall, it opened in 1893, followed by the Alhambra Music Hall in 1902, and the Printania in 1903. Printania, open only in summer, had a large music garden which seated twelve thousand spectators, and produced dinner shows which presented twenty-three different acts, including singers, acrobats, horses, mimes, jugglers, lions, bears and elephants, with two shows a day.[10] 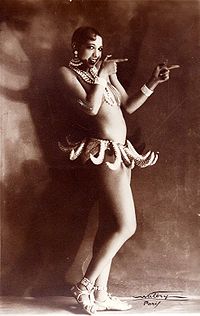 Josephine Baker at the Folies Bergere (1927)

In the 20th century, the competition from motion pictures forced the dance halls to put on shows that more spectacular and more complex. In 1911, the producer Jacques Charles of the Olympia Paris created the grand staircase as a settling for his shows; competing with its great rival, the Folies Bergère, which had been founded in 1869. Its stars in the 1920s included the American singer and dancer Josephine Baker. The Casino de Paris, directed by Leon Volterra and then Henri Varna, presented many famous French singers, including Mistinguett, Maurice Chevalier, and Tino Rossi.[10]

Le Lido, on the Champs-Élysées, opened in 1946, presented Édith Piaf, Laurel & Hardy, Shirley MacLaine, Marlene Dietrich, Maurice Chevalier, and Noël Coward. The Crazy Horse Saloon, featuring strip-tease, dance and magic, opened in 1951. The Olympia Paris went through a number of years as a movie theater before being revived as a music hall and concert stage in 1954. Performers there included Edith Piaf, Marlene Dietrich, Miles David, Judy Garland, and the Grateful Dead. A half dozen music halls exist today in Paris, attended mostly visitors to the city; and a number of more traditional cabarets, with music and satire, can be found.

In the Netherlands, cabaret or kleinkunst (literally: "small art") is a popular form of entertainment, usually performed in theatres. The birth date of Dutch cabaret is usually set at August 19, 1895.[11] In Amsterdam, there is the Kleinkunstacademie (English: Cabaret Academy). It is often a mixture of (stand-up) comedy, theatre, and music and often includes social themes and political satire. In the twentieth century, "the big three" were Wim Sonneveld, Wim Kan, and Toon Hermans. Nowadays, many cabaret shows of popular "cabaretiers" (performers of cabaret) are being broadcast on national television, especially on New Year's Eve, when you can choose from several special cabaret shows in which the cabaretier usually reflects on large events of the past year.[12]

German Kabarett developed from 1901, with the creation of the Überbrettl (Superstage) venue, and by the Weimar era in the mid-1920s, the Kabarett performances were characterized by political satire and gallows humor.[13] It shared the characteristic atmosphere of intimacy with the French cabaret from which it was imported, but the gallows humor was a distinct German aspect.[13]

The Polish kabaret is a popular form of live (often televised) entertainment involving a comedy troupe, and consisting mostly of comedy sketches, monologues, stand up comedy, songs and political satire (often hidden behind double entendre to fool censors).
It traces its origins to Zielony Balonik, a famous literary cabaret founded in Kraków by local poets, writers and artists during the final years of the Partitions of Poland.[14][15]
In post-war Poland it is almost always associated with the troupe (often on tour), not the venue; pre-war revue shows (with female dancers) were long gone.

American cabaret was imported from French cabaret by Jesse Louis Lasky in 1911.[16][17][18] In the United States, cabaret diverged into several different styles of performance mostly due to the influence of jazz music. Chicago cabaret focused intensely on the larger band ensembles and reached its peak during Roaring Twenties, under the Prohibition Era, where it was featured in the speakeasies and steakhouses.

Cabaret in the United States began to decline in the 1960s, due to the rising popularity of rock concert shows, television variety shows,[citation needed] and general comedy theaters. However, it remained in some Las Vegas style dinner shows, such as the Tropicana, with fewer comedy segments. The art form still survives in various musical formats, as well as in the stand-up comedy format, and in popular drag show performances.

Cabaret is currently undergoing a renaissance of sorts in the United States, particularly in New Orleans, Seattle, Philadelphia, Orlando, Tulsa, Asheville, North Carolina and Kansas City, Missouri, as new generations of performers reinterpret the old forms in both music and theatre. Many contemporary cabaret groups in the United States and elsewhere feature a combination of original music, burlesque and political satire, as can be found in such groups as Cabaret Red Light and Leviathan: Political Cabaret. In New York City, since 1985, successful, enduring or innovative cabaret acts have been honored by the annual Bistro Awards.[19] 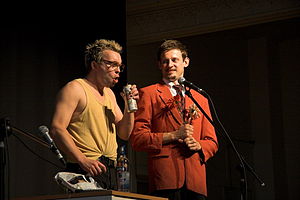 The Cabaret Theatre Club, later known as The Cave of the Golden Calf, was opened by Frida Strindberg (modelled on the Kaberett Fledermaus in Strindberg's native Vienna) in a basement at 9 Heddon Street, London, in 1912. She intended her club to be an avant-garde meeting place for bohemian writers and artists, with decorations by Jacob Epstein, Eric Gill and Wyndham Lewis; but it rapidly came to be seen as an amusing place for high society, and went bankrupt in 1914. The Cave was nevertheless an influential venture, which introduced the concept of cabaret to London. It provided a model for the generation of nightclubs that came after it[20] 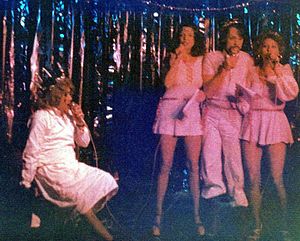 Saint Bongita substitutes for Saint Lucy in an underground Xmas romp at the Poor House in 1974.

In Stockholm, an underground show called Fattighuskabarén (Poor House Cabaret) opened in 1974 and ran for 10 years.[22] Performers of later celebrity and fame (in Sweden) such as Ted Åström, Örjan Ramberg and Agneta Lindén began their careers there. In a somewhat successful attempt to compete, high brow Alexandra's discothèque in the trendiest part of the city opened AlexCab in 1975 and Wild Side Story in 1976. The venue had far from an off-beat ambiance but an underground atmosphere was created there anyway by director Lars Jacob. AlexCab also toured to Gothenburg. The shows' decadence featuring American Steve Vigil shocked some journalists and regulars, thus attracting attention that provided stepping stones for subsequent development of the more mainstream After Dark revues which were still active in 2013. Underground shows produced by CabarEng returned to Stockholm in 2009 and ran regularly on the South Side and in the Old Town until 2013.