Among its significant historic sites is the Reed Gold Mine, a National Historic Landmark.

The county was formed on December 29, 1792 from Mecklenburg County. It was named after Stephen Cabarrus of Chowan County, speaker of the North Carolina House of Commons.

The county was settled mainly by Germans on the Eastern side and the Scotch-Irish in the Western area of the county. There was a need to choose a location for the county seat to develop facilities for county government but the Germans and Scotch-Irish each wanted the county seat to be in an area close to their populations and were unable to come to an agreement. Stephen Cabarrus wrote to the citizens pleading with them to come together in peace to choose a location for their county seat. A central area of the county was chosen in 1796 and aptly named Concord, a derivative of two French words "with" and "peace." Representative Paul Barringer introduced a bill into state legislature to incorporate Concord and this bill passed on December 17, 1806.[4] The town of Concord was begun on land owned by Samuel Huie and wife Jane Morrison Huie.[5]

The first substantiated gold find in America was in 1799 by young Conrad Reed while playing in Little Meadow Creek in southeastern Cabarrus County located on the Reed farm. According to research, Conrad's find was approximately the size of a shoe and weighed 17 pounds.[6]:11 John Reed, father of Conrad, took the nugget into Concord to a silversmith who informed Reed that the rock did not have any value and the elder Reed took the rock home where it stayed for three years until a trip in 1802 to Fayetteville where Reed sold the nugget to a jeweler for $3.50. Over time news traveled back to John Reed that the jeweler sold the nugget for several thousand dollars and Reed traveled back to Fayetteville to ensure he was more fairly compensated; this spurred the beginning of gold mining in the area[7]

John Reed or Johannes Rieth as he was known in Staatsarchiv at Marburg, Germany was one of thousands of Hessian soldiers brought over by British troops to fight against rebellious colonists in the American Revolution. John Reed deserted, as did many other Hessians, and migrated from Georgia to North Carolina, where he settled in an ethnic German community sometime around 1787 and began farming.[8]

John Reed first developed placer mining on his property, then underground mining, and became wealthy from the gold. His mine became known as Reed's Gold Mine. Large amounts of gold were being discovered at the Reed Gold Mine and in other mines in the United States; these mine owners began to use their gold to create currency. In order for the government to retain control of the production of currency and keep a stabilized economic structure, President Andrew Jackson signed into legislation the authorization to create branches of the US Mint. The Charlotte Mint was built to handle the gold coming from the rich gold veins of North Carolina which included Reed Gold Mine.[9]

The Reed Gold Mine was designated a National Historic Landmark, as it was the first gold mine in the country. Gold was mined in North Carolina into the early 20th century. Visitors at the site today can explore some of the mine's reconstructed tunnels.[10]

The old Cabarrus County Courthouse was finished in 1876 and listed on the National Register of Historic Places in 1974. The Confederate soldiers monument is located on the front lawn area.

Cabarrus County is situated in the gently rolling countryside of the Carolina Piedmont There are no significantly high peaks or points, although the eastern half of the county contains the westernmost foothills of the Uwharrie Mountains. Altitude ranges from approximately 500–800 feet above sea level. No large or navigable rivers flow through the county; the nearest navigable waterway is the Yadkin River in nearby Rowan County. Land slope is generally toward the southeast. The longest waterway within the county is Rocky River, which rises in Iredell County and empties into the Pee Dee below Norwood in Stanly County. Weather is temperate with hot summers and mild to chilly winters. Severe weather occurs occasionally, with thunderstorms in the warmer months of the year and ice storms and snowfalls occurring on occasion in winter. From zero to three accumulating snowfalls may be expected in an average winter. Snow generally melts between accumulating snowfalls, and there is no consistent snowpack. An average of four inches (102 mm) of snow and 46 inches (1,200 mm) of rain falls each year. At summer solstice, the length of day is approximately 14 hours and 33 minutes, with visible light lasting 15 hours and 32 minutes.

Communication is via an Interstate highway, Interstate 85, which travels southwest to northeast across the county's northern portion, and several U.S. and state highways. These principal highways include U.S. highways 52, 29, 601, and NC highways 73, 24/27, 200, 49, and 3. Concord Regional Airport (airport code JQF) is located seven miles (11 km) west of Concord. Commercial flights to the area are accessed through the airports at Charlotte, or at Greensboro, North Carolina. Passenger rail service to Kannapolis is available via Amtrak. Both wired and wireless telephone services are nearly universally available in the county. Cable television is available in much of the county. Cabarrus County is within the Greater Charlotte area for broadcast communications.

Most residents of Cabarrus County are Caucasian of Scots-Irish, German, or English-Welsh extraction. A minority population of African American residents inhabit the county.

The different religious denominations represented in the county are mainly Protestant. A small Jewish synagogue, Temple Or Olam exists in the area as well as two Catholic churches, St. James The Greater Catholic Church located in Concord and St. Joseph's Catholic Church in Kannapolis. Eastern Orthodox and Islamic congregations are available in nearby Charlotte.[18]

Cabarrus County is a member of the regional Centralina Council of Governments. Cabarrus County is governed by a five-member Board of Commissioners, elected at large in countywide elections to serve four-year staggered terms. The county's operations are managed by a "County Manager".[19]

The Stonewall Jackson Youth Development Center, a juvenile correctional facility of the North Carolina Department of Public Safety serving boys, is located an unincorporated area in the county, near Concord.[21]

The Cabarrus County School System services all of the county with the exception of parts of Kannapolis, which operates its own school district. The system is generally regarded as one of the better school districts in the state with high student achievement and low instances of violence and other problems.

The county is also home to Barber-Scotia College, the Cabarrus College of Health Sciences (a four-year college), and a branch of Rowan-Cabarrus Community College. UNC Charlotte, although in Mecklenburg County, is actually located near Harrisburg and is easily accessible to Cabarrus residents via [Highway 49]

Cabarrus County citizens are served by the Cabarrus County Public Library system which comprises four library locations and a fifth location to be built in the town of Midland. 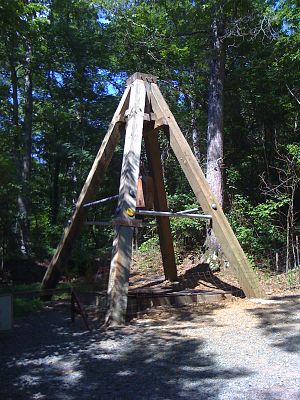 Essential services, including Carolinas Medical Center-NorthEast with a 24-hour emergency department and trauma center, are available in Concord. There are no VA hospitals or military installations in the county.

The state's largest tourist attraction, Concord Mills Mall, is located in Cabarrus County. The Great Wolf Lodge is located near the mall on the opposite side of Interstate 85.

The county is home to Reed Gold Mine, site of the first gold discovery in the United States in 1799.

Self-branded as the Center of American Motorsports, Cabarrus County is rich in NASCAR history.

A state of the art and first of its kind wind tunnel, Windshear, opened July 18, 2008 in Concord. It offers aerodynamic testing facilities to NASCAR and Formula One racing teams and automobile manufacturers.

The area is served by the Concord-Kannapolis Independent Tribune in print and online and The Weekly Post, a weekly newspaper. Radio station WTIX 1410 AM serves the area with a Classic Country music format. WTIX broadcasts from a tower on US Highway 29 North near Poplar Tent Road in Concord and has studios in the Hidden Plaza at 308 Church Street North in Concord. 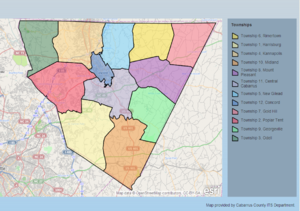 The county is divided into twelve townships, which are both numbered and named:

There has been a push for incorporation in the Odell School community, which is located in the northwestern corner of the county. The current residents hope to incorporate as a means to avoid annexation by the city of Kannapolis.[citation needed]