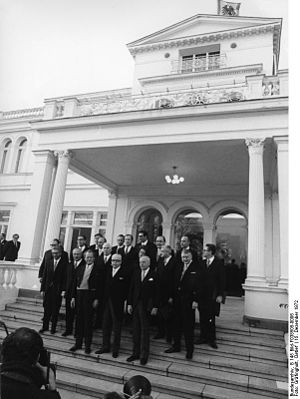 Cabinet Brandt II outside the Cabinet Office on 15 December 1972

The second Brandt cabinet was the government of Germany between 15 December 1972 and 16 May 1974, during the 7th legislature of the Bundestag. Led by the Social Democrat Willy Brandt, the cabinet was a coalition between the Social Democrats (SDP) and the Free Democratic Party (FDP). It followed the Cabinet Brandt I. Following Brandt's resignation as Chancellor on 7 May 1974, Vice-Chancellor Walter Scheel (FDP) served as Acting Chancellor for nine days, until the inception of the Cabinet Schmidt I.

The federal cabinet consisted of the following Ministers: