The Cabinet Office is a department of the Government of the United Kingdom responsible for supporting the Prime Minister and Cabinet of the United Kingdom.[3] It is composed of various units that support Cabinet committees and which co-ordinate the delivery of government objectives via other departments. It currently has just over 2,000 staff, most of whom work in Whitehall. Staff working in the Prime Minister's Office are part of the Cabinet Office.

The Cabinet Office's core functions are:[4]

Other functions include oversight of the Crown Commercial Service and the accreditation of Social Impact Contractors.

The department was formed in December 1916 from the secretariat of the Committee of Imperial Defence[5] under Sir Maurice Hankey, the first Cabinet Secretary.

Traditionally the most important part of the Cabinet Office's role was facilitating collective decision-making by the Cabinet, through running and supporting Cabinet-level committees. This is still its principal role, but since the absorption of some of the functions of the Civil Service Department in 1981 the Cabinet Office has also helped to ensure that a wide range of Ministerial priorities are taken forward across Whitehall.

It also contains miscellaneous units that do not sit well in other departments. For example:

The Cabinet Office Ministers are as follows:[7]

All of the Cabinet Office's ministers are Cabinet members; or are allowed to attend Cabinet when their brief is on the agenda.[8]

The Cabinet Office also supports the work of: 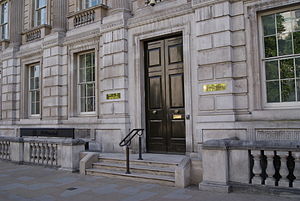 The entrance to the Cabinet Office.

The main building of the Cabinet Office is at 70 Whitehall, adjacent to Downing Street and was built in 1847. Remains of Henry VIII's tennis courts from the Palace of Whitehall can be seen within the building.

The building was originally the Cockpit, used for cock fighting in the Tudor period. It was then converted into a private residence by Charles II for Princess Anne, the future Queen Anne, when she married in 1683. In 1689, both Anne and her closest friend (and later most influential adviser), Sarah, Lady Churchill were imprisoned here by James II after he lost support to Prince William of Orange in the period just before the Glorious Revolution. After Anne's accession in 1702, she gave the Cockpit to Sarah Churchill, Duchess of Marlborough and her husband, John Churchill, 1st Duke of Marlborough. They were the last private residents before it became the Treasury, and was being used as a Cabinet office by 1719.

The department occupies other buildings in Whitehall and the surrounding area, including part of 1 Horse Guards, as well as sites in other parts of the country. In October 2013 during the St Jude storm, a crane collapsed on top of the Cabinet Office. This led to a closure of Whitehall.[10]

The Cabinet Office has the following responsibilities at a UK national level.

Its main counterparts in the devolved nations are as follows: