From Infogalactic: the planetary knowledge core
Jump to: navigation, search
For the form of food, see casserole.
File:CasserolesRosemont1.jpg
Casserole protest in Montreal, Canada on May 24, 2012.

A cacerolazo (Spanish pronunciation: [kaseɾoˈlaso]), cacerolada ([kaseɾoˈlaða]) or casserole is a form of popular protest practised in certain Spanish-speaking countries – in particular Venezuela, Argentina, Chile, Colombia, Uruguay, Ecuador, Cuba, Spain – and more recently English and French-speaking countries, most notably Québec, as well as in Turkey during the 2013 protests in Turkey and Brazil during the 2015 protests in Brazil – which consists in a group of people creating noise by banging pots, pans, and other utensils in order to call for attention. What is peculiar about this type of demonstration is that people can protest from their own homes, thus achieving a high level of support and participation.

The word comes from Spanish cacerola, which means "stew pot". The derivative suffixes -azo and -ada denote a hitting (punching or striking) action,[1] and has been extended metaphorically to any sort of shock demonstration.[citation needed] This type of manifestation started in 1971 in Chile, against the shortages of industrial products during the administration of Salvador Allende.[2]

[3] When this manner of protest was practised in Canada,[4] in English it was referred to by most media as "casseroles" rather than the Spanish term cacerolazo.

One of the largest and most recent cacerolazos occurred in Argentina during 2001, consisting largely of protests and demonstrations by middle-class people who had seen their savings trapped in the so-called corralito (a set of restrictive economic measures that effectively froze all bank accounts, initially as a short-term fix for the massive draining of bank deposits). The corralito meant that many people who needed a large amount of cash immediately, or who simply lived off the interests from their deposits, suddenly found their savings unavailable. As court appeals were slow and ineffective, people resorted to protest in the streets.

As the Argentine peso quickly devalued and foreign currency fled the country, the government decreed a forced conversion of dollar-denominated accounts into pesos at an arbitrary exchange rate of 1.4 pesos per dollar. At this point the unavailability of cash for people trapped in the corralito compounded with the continuous loss of value of their savings, and the unresponsiveness of the appeal authorities (minor courts and the Supreme Court itself) further angered the protesters.

The first cacerolazos were spontaneous and non-partisan. While in Argentina most demonstrations against government measures are customarily organized by labour union activists and low-level political recruiters among the lower classes, and often featuring an assortment of large banners, drums and pyrotechnic devices, cacerolazos were composed mostly of spontaneously gathered middle-class workers, housewives and professionals, who used not to be involved in grassroots political action of any kind.

After a time, however, the cacerolazo became an organized phenomenon, often of a violent nature, directed against the banks. Many of these were attacked, their facades spray-painted, their windows broken, their entrances blocked by tire fires, or even their facilities occupied by force at times.

In order to avoid further violence, especially with the deadly December 2001 riots still fresh in the memories of Argentines, the government decided not to use active police force against the cacerolazos unless absolutely necessary, and to restrict most police presence to barricades in critical spots, a policy that was followed also with piquetero marches of unemployed people asking for state welfare and jobs.

Isolated cacerolazos also featured during the apagón ("blackout") of September 24, 2002, to protest against increases in public service fees requested by the providers. As the financial and macroeconomic conditions became more stable, the government loosened the restrictions on the withdrawal of deposits, and the cacerolazos died out.

On March 25, a group led by Luis D'Elía, a supporter of the Kirchner administration, and a cacerolazo violently faced each other during the demonstrations pro and against the export tax policy of Cristina Kirchner's government.[5][6][7][8] 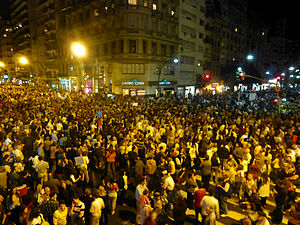 The 2012 cacerolazo at the Santa Fe and Callao streets, Buenos Aires.

On May 31, a nationwide cacerolazo took place with a massive following of approximately ten thousand people in the capital alone. The march wa organised on the internet and was in protest of the Kirchnerite government, specifically against the introduction of controls on the foreign currency exchange market by Cristina Kirchner's government, rampant crime rates, a sense of disruption and infringement of civil rights due to increasingly interventionist policies by the AFIP tax agency(irs), including a fiscal reform in Buenos Aires province that would more than triple the current land property tax, income tax rates unadjusted according to real inflation, persevering high inflation, a devalued currency, the inability to save money and many allegedly corruption charges against government and policymakers [9][10][11]

On May 31 and June 1, cacerolazos in high class neighbourhoods were organized through the internet in protest to a diversity of reasons, not existing a single cohesive one. The most prominent was the introduction of controls on the foreign currency exchange market by Cristina Kirchner's government. With a lesser extent it was a protest against crime, fiscal reform on land property tax and allegedly national government corruption cases [9][10][11]

On September 13, thousands of Argentines marched in the largest protests since 2008 against the government of President Cristina Fernandez, who, according to an opinion poll by Management & Fit,[14] has lost popularity since her landslide re-election the previous year (this point of view is not shared by public opinion research company Equis, whose CEO Artemio López said that the popularity indexes remain stable[15]). The event raised a noticeable polemic, as news coverage from most government-aligned newspapers and TV broadcasters was reduced to a minimum, and government officials' claim regarding that the cacerolazo only represented a small and minority portion of the population.[16]

Another protest was made on November 8, commonly known as 8N amongst the country, principally in the Obelisco and the Plaza de Mayo, and around the world in the major cities of Spain, the US, Canada, Brazil, France, the UK and bordering countries. The latter was also called within Facebook and Twitter, though in contrast to the one on September 13, to which assisted over 50,000 people, 250,000 were present at the 8N. The main complaints were, again the February rail accident victims, the inflation and the reject to the possible "re-re-election" of Kirchner, but also insecurity and the Ley de Medios. Again, Todo Noticias dedicated to transmit it completely, while other media supporting the president, such as América TV and C5N, in which a reporter was knocked down [17] were also present.The president of the Asociación Mutual Israelita Argentina, Guillermo Borger, described as "reprehensible and abominable" swastikas presence during the protest march held anti-government sectors in the Plaza de Mayo and other parts of the country. "There is nothing that can justify the presence of these symbols", which recalled "the aberrant moment in the history of mankind," the official told the agency that plays Jewish News (AJN).[18]

Cacerolazo also took place in Brazil in 2015 as a reaction of part of the population against the bad economic period as well the corruption in the government.

In 2012 in Québec citizens were using cacerolazo after the adoption on 18 May of Bill 78, an act which restricts rights to assemble after peaceful protests were met with police violence in Montreal and Victoriaville. Bill 78, aimed at restoring access to education for those students who disagreed with the general strike and at protecting businesses and citizens from any violence that might occur as a result of a protest, has been criticized by the United Nations, the Quebec Bar Association, Amnesty International, and others. Court challenges against the bill are underway.

A large number "casseroles" or "pots and pans demonstrations" were held in towns and cities across the province, with the largest ones being primarily concentrated in Montreal's various neighbourhoods.[19][20] More protests outside the Province of Quebec (over 66 other Canadian locations) were held in solidarity with the student protesters, including cities and towns such as Vancouver, Calgary,[21] Saskatoon,[22] Winnipeg,[4] Hamilton,[23] Sudbury,[24] Tatamagouche,[25] and Halifax.[26]

In 2003, a song named Libérez-nous des libéraux (Liberate Us From Liberals) was written, which prophesied "Need to rush into the street / like a spring flood / shattering our discontent / a debacle of pans / enough talking, make noise / a charivari to topple the party / as in Argentine, in Bolivia".[27] On June 15, 2012, when the same band played a gig at Francofolies, they asked everybody to bring their pans and spoons.[28]

Cacerolazos began in Chile in 1971 in protest at shortages during the Salvador Allende administration. By 1973 they had become commonplace as protests against the administration intensified amid increasing shortages. After Augusto Pinochet seized power in 1973 cacerolazos disappeared for a time until the economic crisis of 1982-83 set in. Thereafter cacerolazos continued up until the Pinochet regime lost a plebiscite in 1988 that put him out of office two years later.

Cacerolazos were organized in 2011 for two different reasons. On 15 May there was pot-banging in several cities in protest of the HidroAysén dam project.[29] Then in August there were two cacerolazos across the country in support of student protests, the first in August 4[30] and a second one in August 8.[31]

The protests following the financial crisis that started in 2008 are sometimes called The Kitchenware Revolution, because people took to the streets banging on pots and pans and other household utensils.

In 2006, during the Oaxaca protests that saw thousands occupy their city following the police repression of teachers' strikes, 5000 women marchers banged pots and pans with spoons and meat tenderizers.[32] Their march took them through the city squares and to outside the state-run television station channel 9. The women demanded a one-hour slot to report on the people's story of what was happening in Oaxaca; a story that was censored and skewed by government propaganda against the protesters. When the station refused the women, still carrying their pots and pans, entered the building and took over the station. They carried out live broadcasts of the people's struggles.[33]

More than 90% of the Spaniards were against the Iraq War [34] and provoked during 2003 cacerolazo-fashioned protests against the government decision to support it.[35] People protested from their homes turning lights on and off, making noise with whistles and klaxons and hitting stew pots. In Huesca lamp posts of 16 streets were turned off in protest during 15 minutes.

During the 2013 protests in Turkey when late at night after May 31 people in central Istanbul were forced to go to their homes due to the high amounts of tear gas, they continued protesting from their homes by banging pots and pans. About half past one the entire city started to reverberate.[36] This also functioned to create awareness of the situation since the self-censorship of media prevented people from being informed about the scale of the protests. After the first day, this form of protests continued, starting every evening at 9pm, lasting a few minutes.

After the 2013 election on the 15th of April millions of Capriles supporters banged their pots and pans in the streets and from their windows after Capriles refused to accept the results, asked for a recount, and told the whole country to protest during a power cut of three hours in some places nationwide. The next day, Capriles supporters continued the cacerolazo, asking for a recount. Similar concentrations were observed all over the world, particularly in South and Central Florida, where a lot of Venezuelan citizens reside, most of them Capriles sympathizers. It was no less than Capriles himself who called for a "cacerolazo" to denounce the election results, after the National Electoral Council declared Nicolas Maduro of the United Socialist Party of Venezuela the official winner in the snap presidential elections held the previous day.[37]