Caciocavallo [ˌkatʃokaˈvallo] is a type of stretched-curd cheese made out of sheep's or cow's milk. It is produced throughout Southern Italy, particularly in the Apennine Mountains and in the Gargano peninsula. Shaped like a tear-drop, it is similar in taste to the aged Southern Italian Provolone cheese, with a hard edible rind. 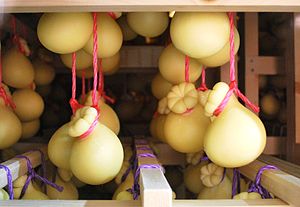 The Italian name of the cheese caciocavallo literally means "horse cheese" and it is generally thought that the name derives from the fact that two cheese forms are always bound together with rope and then left to mature by placing them 'a cavallo', i.e. straddling, upon a horizontal stick or branch; however, it is more likely that the name derives from Latin *cascabellus with the meaning of "[sleigh] bell" for its shape of a hanging ball; compare Spanish "cascabel" = "sleigh bell, rattle" .[1][2]

Apparently caciocavallo was mentioned the first time around 500 BC by Hippocrates, emphasising the "Greeks' cleverness in making cheese".[3] Types of cheese with names similar to "caciocavallo" are common throughout the Balkans and Southern Italy. In Sicily, the Ragusano DOP, known locally as "caciocavallo ragusano" had to drop the denomination "caciocavallo" in order to get DOP status.[4]

Caciocavallo Silano is made with cow’s milk in designated areas of Southern Italy, in the regions of Basilicata, Calabria, Campania, Molise and Puglia and gained protected geographical status in 1993.[5]

Each of these local speciality cheeses is different from both Caciocavallo Silano and each other.