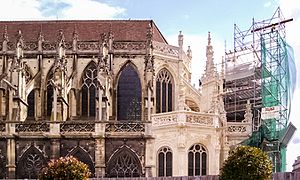 Église Saint-Pierre, Caen. The restoration of the chevet shows the original colour of the stone.

Caen stone or Pierre de Caen, is a light creamy-yellow Jurassic limestone quarried in northwestern France near the city of Caen.

The limestone is a fine grained oolitic limestone formed in shallow water lagoons in the Bathonian Age about 167 million years ago. The stone is homogeneous, and therefore suitable for carving.

The stone was first used for building in the Gallo-Roman period. Production from open cast quarries re started in the 11th Century. Shipped to England, Canterbury Cathedral, Westminster Abbey and the Tower of London were all partially built from Caen stone. Underground mining developed in the 19th Century, but the stone trade declined in the 20th Century stopping in the 1960s. Excavation restarted in the 1980s with the stone being used for building the Caen Memorial. A 2004 decree by Caen City council authorised the annual quarriyng of 9000 tonnes of stone.