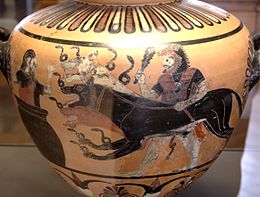 Caere (also Caisra and Cisra) is the Latin name given by the Romans to one of the larger cities of Southern Etruria, the modern Cerveteri, approximately 50-60 kilometres north-northwest of Rome. To the Etruscans it was known as Cisra, to the Greeks as Agylla and to the Phoenicians as Kyšryʼ. It was bounded by the two rivers Mola and Manganello, and lay 80 metres above sea level on an outcrop of rocky tuff, a few kilometres from the coast.

Today, the area of Cerveteri is known for its Etruscan necropolis and archaeological treasures.

The earliest evidence of settlement of the site come from finds of urns at two areas (Cava della Pozzolana and Sorbo) from the 8th and 9th centuries BC. Trade between the Greeks and Etruscans became increasingly common in the middle of the 8th century BC, with standardised urns and pottery common in graves of the time.

The town became the main Etruscan trading centre during the 7th century BC, as well as increasing trade with other Greek colonies in Southern Italy and Sicily, and with the Corinthians. Locally manufactured products began to imitate imported Greek pottery.

Burials of the time became increasingly grand, with jewellery and other products of particularly fine manufacture, illustrating the continuing good fortunes of the city. At the height of its prosperity in the 6th century BC, the people of Caere (with the Carthaginians) emerged marginally victorious from clashes with the Phocaean Greeks.

Following the "Battle of the Sardinian Sea", captured prisoners were stoned to death in the city, an act that was attributed as the cause of an ensuing plague. In recompense, athletic contests were held every year in the city to honour the dead, who were given proper burial.

Following this historical, violent outburst by the people of the city, trade once again flourished through the 5th century BC, partly in spite of the difficulties affecting Etruria during the period. Arguably, this is due to the particularly good relations with the Rome, a traditional ally.

In 509 BC, upon the overthrow of the Roman monarchy, the king Lucius Tarquinius Superbus and his two eldest sons Titus and Aruns went into exile in Caere.[1] A little more than 100 years later, the city was the destination for the priests and Vestal Virgins fleeing the oncoming Gallic attack on Rome.[2] In 353 BC Caere, allied to the Tarquinii, lost a war with Rome and with it some of its territory, including the coastal area and ports so important for trade. With this loss, the area lost its wealth and power completely by the first century AD.

This occurred during the First Punic War that pitted Rome against Carthage: the Etruscans and Carthaginians were traditional allies (see Battle of Alalia). Furthermore, the first resumption of gladiatorial combats in Rome, after its liberation from the Etruscans by the Republic in 510 BC, was in 264, also during the First Punic War. And Caere's ally, Tarquinia, had a peace treaty with Rome that expired in 268 (on the eve of the Punic Wars).

Thus, it would appear that Carthage's Total War against the Roman Republic breathed new life into the Etruscan "Old Ways", and we infer that Carthage appealed to its enemy's enemies for support, pandering to smouldering Etruscan animosity towards their Roman overlords in order to open up a second military front against Rome.

Saint Adeodatus participated as bishop of this episcopal see, in a synod at Rome called by Pope Symmachus in 499, shortly before the seat of the bishopric was moved, because of malaria, from Caere Vetus (today's Cerveteri) to the new settlement of Caere Nova (today's Ceri). The territory of the Diocese of Caere became part of the Diocese of Porto around the 11th century.[3][4]

No longer a residential bishopric, Caere is today listed by the Catholic Church as a titular see.[5]

Before the dominance of Rome in the area led to the fall of Etruria, during the period 700-300 BC the inhabitants had constructed an impressive necropolis known today as Banditaccia, which is still not fully excavated but has already yielded the "Sarcophagus of the Spouses". Throughout 2012 - 2015, Queen's University has performed archaeology on area of the urban centre known as Vigna Marini.[6]