From Infogalactic: the planetary knowledge core
Jump to: navigation, search
This article is about the food service location. For other uses, see Cafeteria (disambiguation).
File:Infosys.Electronic.City.Cafeteria.JPG
A corporate cafeteria in Bangalore, India, December 2003.
File:Currier dining hall.jpg
The dining hall in Currier House of Harvard College, August 2005.

A cafeteria is a type of food service location in which there is little or no waiting staff table service, whether a restaurant or within an institution such as a large office building or school; a school dining location is also referred to as a dining hall or canteen (in British English).[1] Cafeterias are different from coffeehouses, despite being the Spanish translation of the English term.

Instead of table service, there are food-serving counters/stalls, either in a line or allowing arbitrary walking paths. Customers take the food they require as they walk along, placing it on a tray. In addition, there are often stations where customers order food and wait while it is prepared, particularly for items such as hamburgers or tacos which must be served hot and can be immediately prepared. Alternatively, the patron is given a number and the item is brought to their table. For some food items and drinks, such as sodas, water, or the like, customers collect an empty container, pay at the check-out, and fill the container after the check-out. Free unlimited second servings are often allowed under this system. For legal purposes (and the consumption patterns of customers), this system is rarely, if at all, used for alcoholic beverages in the US.

Customers are either charged a flat rate for admission (as in a buffet) or pay at the check-out for each item. Some self-service cafeterias charge by the weight of items on a patron's plate. In universities and colleges, some students pay for three meals a day by making semestrial payments.

As cafeterias require few employees, they are often found within a larger institution, catering to the clientele of that institution. For example, schools, colleges and their residence halls, department stores, hospitals, museums, military bases, prisons, and office buildings often have cafeterias.

At one time, upscale cafeteria-style restaurants dominated the culture of the Southern United States, and to a lesser extent the Midwest. There were numerous prominent chains of them: Bickford's, Morrison's Cafeteria, Piccadilly Cafeteria, S&W Cafeteria, Apple House, Luby's, K&W, Britling, Wyatt's Cafeteria, and Blue Boar among them. Currently two Midwestern chains still exist, Sloppy Jo's Lunchroom and Manny's, which are both located in Illinois. There were also a number of smaller chains, usually located in and around a single city. These institutions, with the exception of K&W, went into a decline in the 1960s with the rise of fast food and were largely finished off in the 1980s by the rise of "casual dining". A few chains — particularly Luby's and Piccadilly Cafeterias (which took over the Morrison's chain in 1998) — continue to fill some of the gap left by the decline of the older chains. Some of the smaller Midwestern chains, such as MCL Cafeterias centered on Indianapolis, are still very much in business.

Perhaps the first self-service restaurant (not necessarily considered a cafeteria) in the United States was the Exchange Buffet in New York City, opened September 4, 1885, which catered to an exclusively male clientele. Food was purchased at a counter, and patrons ate standing up.[2] This represents the predecessor of two formats: the cafeteria, described below, and the automat.

During the 1893 World's Columbian Exposition in Chicago, an entrepreneur named John Kruger built an American version of the smörgåsbords he had seen while traveling in Sweden. Emphasizing the simplicity and light fare, he called it the "Cafeteria" - Spanish for "coffee shop". The exposition attracted over 27 million visitors (half the US population at the time) in six months, and it was initially through Kruger's operation that America first heard the term and experienced the self-service dining format.[3][4] 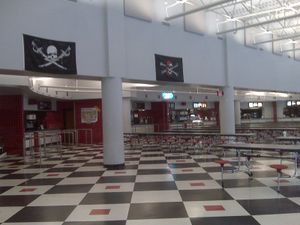 Meanwhile, in everyday, hometown America, the chain of Childs Restaurants was quickly growing from about 10 locations in New York City in 1890 to hundreds across the United States and Canada by 1920. Childs is credited with the critical innovation of adding trays and a "tray line" to the self-service format, which they introduced in 1898 at their 130 Broadway location.[3][4] Childs did not change its format of sit-down dining, however. This was soon the standard design for most Childs Restaurants - and many imitators - from coast-to-coast, and ultimately the dominant design for cafeterias.

It has also been said that the "cafeteria craze" started in May 1905, when a woman named Helen Mosher opened a humble downtown L.A. restaurant where people chose their food at a long counter and carried their own trays to their tables."[5] California does have a long and rich history in the cafeteria format - most notably the many Boos Brothers Cafeterias, and also Clifton's, and Schaber's. However, the facts do not warrant the "wellspring" characterization that some have ascribed to the region. The earliest cafeterias in California were opened at least 12 years after Kruger's Cafeteria, and Childs already had several dozen locations scattered around the country. Finally, Horn & Hardart, an automat format chain (slightly different from the cafeteria), was also well established in the mid-Atlantic region before 1900.

Between 1960 and 1981, the popularity of cafeteria format restaurants was gradually overcome by the emergence of the fast food restaurant and fast casual restaurant formats. 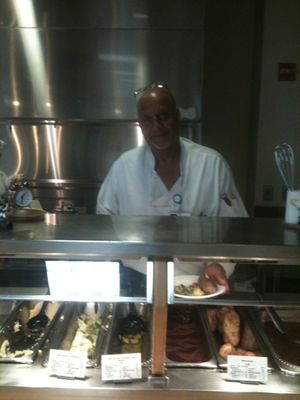 A cafeteria in a U.S. military installation is known as a chow hall, a mess hall, a galley, mess decks or, more formally, a dining facility, whereas in common British Armed Forces parlance, it is known as a cookhouse or mess. Students in the USA often refer to cafeterias as lunchrooms, though breakfast as well as lunch is often eaten there.[citation needed] Some school cafeterias in the United States have stages and movable seating that allow them to be used as auditoriums. These rooms are known as cafetoriums. Cafeterias serving university dormitories are sometimes called dining halls or dining commons. A food court is a type of cafeteria found in many shopping malls and airports featuring multiple food vendors or concessions, although a food court could equally be styled as a type of restaurant as well, being more aligned with public, rather than institutionalised, dining.

Some monasteries, boarding schools, and older universities refer to their cafeteria as a refectory. Modern-day British cathedrals and abbeys, notably in the Church of England, often use the phrase refectory to describe a cafeteria open to the public. Historically, the refectory was generally only used by monks and priests. For example, although the original 800-year-old refectory at Gloucester Cathedral (the stage setting for dining scenes in the Harry Potter movies) is now mostly used as a choir practice area, the relatively modern 300-year-old extension, now used as a cafeteria by staff and public alike, is today referred to as the refectory.[6]

A cafeteria located in a television studio is often called a commissary. NBC's commissary, The Hungry Peacock, was often joked about by Johnny Carson on The Tonight Show.

In American English, a college cafeteria is a cafeteria intended for college students. In British English it is often called the refectory. These cafeterias can be a part of a residence hall or in a separate building.[citation needed] Many of these colleges employ their own students to work in the cafeteria.[citation needed] The number of meals served to students varies from school to school, but is normally around 15 meals per week.[citation needed] Like normal cafeterias, a person will have a tray to select the food that he or she wants, but (at some campuses) instead of paying money, pays beforehand by purchasing a meal plan.[citation needed]

The method of payment for college cafeterias is commonly in the form of a meal plan, whereby the patron pays a certain amount at the start of the semester and details of the plan are stored on a computer system. Student ID cards are then used to access the meal plan. Meal plans can vary widely in their details and are often not necessary to eat at a college cafeteria. Typically, the college tracks students' usage of their plan by counting the number of predefined meal servings, points, dollars, or number of buffet dinners. The plan may give the student a certain number of any of the above per week or semester and they may or may not roll over to the next week or semester.[7]

Many schools offer several different options for using their meal plans. The main cafeteria is usually where most of the meal plan is used but smaller cafeterias, cafés, restaurants, bars, or even fast food chains located on campus, on nearby streets, or in the surrounding town or city may accept meal plans. A college cafeteria system often has a virtual monopoly on the students due to an isolated location or a requirement that residence contracts include a full meal plan.[citation needed] It is not uncommon for the entire food service operation to be outsourced to a managed services company such as Aramark, Sodexo, or Compass Group (under the Scolarest name in the United Kingdom).[citation needed]