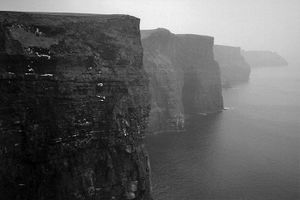 Ceann Caillí ('Hag's Head'), the southernmost tip of the Cliffs of Moher in County Clare. One of many locations named for the Cailleach.[1]

In Gaelic mythology (Irish, Scottish and Manx) the Cailleach (Irish pronunciation: [ˈkalʲəx], Scottish Gaelic pronunciation: [ˈkaʎəx]) is a divine hag, a creator deity and weather deity, and an ancestor deity. She is also commonly known as the Cailleach Bhéara(ch) or Bheur(ach). The word cailleach means "hag" in modern Scottish Gaelic,[2] and has been applied to numerous mythological figures in Ireland, Scotland and the Isle of Man.[3]

The 8th/9th-century Irish poem The Lament of the Old Woman says that the Cailleach's name is Digdi or Digde. In The Hunt of Slieve Cuilinn she is called Milucra, sister of Áine. In the tale of the Glas Gaibhnenn she is called Biróg. Elsewhere, she is called Buí or Bua(ch).[10] In Manx Gaelic she is known as the Caillagh.[3][11]

The plural of cailleach is cailleacha ([ˈkalʲəxə]) in Irish and cailleachan ([ˈkaʎəxən]) in Scottish Gaelic. The word is found as a component in terms like the Gaelic cailleach-dhubh ("nun") and cailleach-oidhche ("owl"),[2] as well as the Irish cailleach feasa ("wise woman, fortune-teller") and cailleach phiseogach ("sorceress, charm-worker"). Related words include the Gaelic caileag ("young woman, girl")[2] and the Lowland Scots carline/carlin ("old woman, witch").[12] A more obscure word that is sometimes interpreted as "hag" is the Irish síle, which has led some to speculate on a connection between the Cailleach and the stonecarvings of Sheela na Gigs.[12][13] 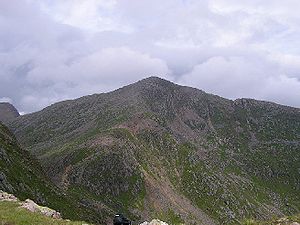 In Scotland, where she is also known as Beira, Queen of Winter, she is credited with making numerous mountains and large hills, which are said to have been formed when she was striding across the land and accidentally dropped rocks from her creel or wicker basket. In other cases she is said to have built the mountains intentionally, to serve as her stepping stones. She carries a hammer for shaping the hills and valleys, and is said to be the mother of all the goddesses and gods.[14]

The Cailleach displays several traits befitting the personification of winter: she herds deer, she fights spring, and her staff freezes the ground.[15]

In partnership with the goddess Brìghde, the Cailleach is seen as a seasonal deity or spirit, ruling the winter months between Samhainn (1 November or first day of winter) and Bealltainn (1 May or first day of summer), while Brìghde rules the summer months between Bealltainn and Samhainn.[16] Some interpretations have the Cailleach and Brìghde as two faces of the same goddess,[16] while others describe the Cailleach as turning to stone on Bealltainn and reverting to humanoid form on Samhainn in time to rule over the winter months. Depending on local climate, the transfer of power between the winter goddess and the summer goddess is celebrated any time between Là Fhèill Brìghde (1 February) at the earliest, Latha na Cailliche (25 March), or Bealltainn (1 May) at the latest, and the local festivals marking the arrival of the first signs of spring may be named after either the Cailleach or Brìghde.[16]

Là Fhèill Brìghde is also the day the Cailleach gathers her firewood for the rest of the winter. Legend has it that if she intends to make the winter last a good while longer, she will make sure the weather on 1 February is bright and sunny, so she can gather plenty of firewood to keep herself warm in the coming months.[3] As a result, people are generally relieved if Là Fhèill Brìghde is a day of foul weather, as it means the Cailleach is asleep, will soon run out of firewood, and therefore winter is almost over.[3] On the Isle of Man, where She is known as Caillagh ny Groamagh, the Cailleach is said to have been seen on St. Bride's day in the form of a gigantic bird, carrying sticks in her beak.[3]

In Scotland, the Cailleachan (lit. 'old women') are also known as The Storm Hags, and seen as personifications of the elemental powers of nature, especially in a destructive aspect. They are said to be particularly active in raising the windstorms of spring, during the period known as A' Chailleach.[16][17] 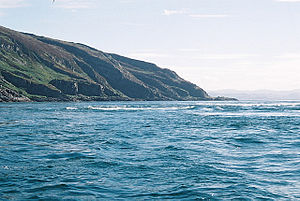 The Corryvreckan whirpool (Scottish Gaelic: Coire Bhreacain - 'cauldron of the plaid') washtub of the Cailleach

On the west coast of Scotland, the Cailleach ushers in winter by washing her great plaid (Gaelic: féileadh mòr) in the Gulf of Corryvreckan (Gaelic: Coire Bhreacain - 'cauldron of the plaid'). This process is said to take three days, during which the roar of the coming tempest is heard as far away as twenty miles (32 km) inland. When she is finished, her plaid is pure white and snow covers the land.[16]

In Scotland and Ireland, the first farmer to finish the grain harvest made a corn dolly, representing the Cailleach (also called "the Carlin or Carline"[18]), from the last sheaf of the crop. The figure would then be tossed into the field of a neighbor who had not yet finished bringing in their grain. The last farmer to finish had the responsibility to take in and care for the corn dolly for the next year, with the implication they'd have to feed and house the hag all winter. Competition was fierce to avoid having to take in the Old Woman.[19]

Some scholars believe the Old Irish poem, 'The Lament of the Old Woman of Beare' is about the Cailleach; Kuno Meyer states, "she had fifty foster-children in Beare. She had seven periods of youth one after another, so that every man who had lived with her came to die of old age, and her grandsons and great-grandsons were tribes and races."[20][21]

Locations associated with the Cailleach 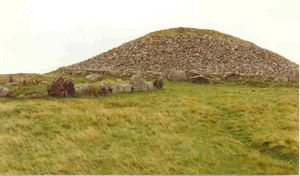 The burial chamber at the summit of Sliabh na Caillí

In Ireland she is also associated with craggy, prominent mountains and outcroppings, such as Hag's Head (Irish: Ceann Caillí, meaning "hag's head") the southernmost tip of the Cliffs of Moher in County Clare.[1] The megalithic tombs at Loughcrew in County Meath are situated atop Slieve na Calliagh (Irish: Sliabh na Caillí, meaning "the hag's mountain") and include a kerbstone known as "the hag's chair".[22] Cairn T on Slieve na Calliagh is a classic passage tomb, in which the rays of the equinox sunrise shine down the passageway and illuminate an inner chamber filled with megalithic stonecarvings.[23] 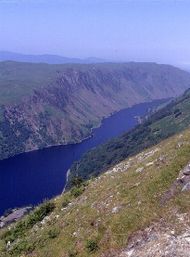 The Cailleach is prominent in the landscape of Argyll and Bute, Scotland. In later tales she is known as the Cailleach nan Cruachan ("the witch of Ben Cruachan"). Ben Cruachan is the tallest mountain in the region. Tea-towels and postcards of her are sold in the visitor shop for the Hollow Mountain, which also features a mural depicting her accidental creation of Loch Awe.[24]

Legend has it that the Cailleach was tired from a long day herding deer. Atop Ben Cruachan she fell asleep on her watch and a well she was tending overflowed, running down from the highlands and flooding the valleys below, forming first a river and then the loch.[24][25] The overflowing well is a common motif in local Gaelic creation tales - as seen in the goddess Boann's similar creation of the River Boyne in Ireland.[26] Other connections to the region include her above-mentioned strong ties with the fierce whirlpool in the Gulf of Corryvreckan.[16]

Beinn na Caillich on the Isle of Skye is one of her haunts, as are other mountains prominent in the landscape, and from which fierce storms of sleet and rain descend, wreaking havoc and destruction upon the lands below.[16] 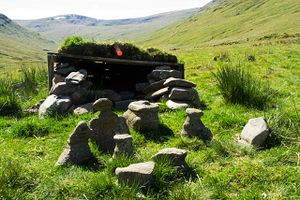 There is a Glen Cailleach which joins to Glen Lyon in Perthshire. The glen has a stream named Alt nan Cailleach. This area is famous for a pagan ritual which according to legend is associated to the Cailleach. There is a small Shieling in the Glen, known as either Tigh nan Cailleach or Tigh nam Bodach, which houses a series of apparently carved stones. According to local legend they represent the Cailleach, her husband the Bodach, and their children.[27][28]

The local legend suggests that the Cailleach and her family were given shelter in the glen by the locals and while they stayed there the glen was always fertile and prosperous. When they left they gave the stones to the locals with the promise that as long as the stones were put out to look over the glen at Bealltainn and put back into the shelter and made secure for the winter at Samhainn then the glen would continue to be fertile.[27]

This ritual is still carried out to this day.[28]