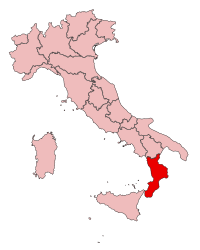 Calabrian wine (Italian: Vino Calabrese) is Italian wine from the Calabria region of southern Italy. Over 90% of the region's wine production is red wine, with a large portion made from the Gaglioppo grape. Calabria has 12 Denominazione di origine controllata (DOC) regions but only 4% of the yearly production is classified as DOC wine. The region is one of Italy's most rural and least industrialized with per capita income less than half of the national average.[1] Following World War II, many of Calabria's inhabitants emigrated to the United States and Argentina. Those left behind have been slow to develop a vibrant wine industry with only the red wines of Cirò garnering much international attention. Today Calabrian wines are mostly produced to high alcohol levels and sold to co-operatives who transfer the wines to the northern Italian wine regions to use as blending component. There are no Denominazione di Origine Controllata e Garantita (DOCG) regions but 12 Indicazione Geografica Tipica (IGT) designations.[2] 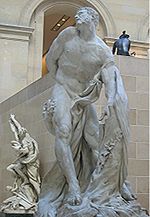 Pierre Puget's 1682 sculpture of Milo of Croton at the Louvre.

The region of Calabria was first cultivated by the Oenotrians, and then by the ancient Greeks. The Greek athlete Milo of Croton was from this region and was reported to drink 10 litres (2.6 US gal) of Ciró wine each day. Tradition has that the wine is still made in the same way today as it was in Milo's time.[3] During the 1st century AD, Pliny the Elder included Calabrian wine in his listings of quality Italian wines.[4]

Calabria is located at the "toe" of the Italian peninsula and is characterized by its Mediterranean climate. To the north is the Apennine Mountains forming the border with Basilicata. The Ionian Sea forms the eastern and southern borders followed by the Strait of Messina (separating Calabria from Sicily) and Tyrrhenian Sea forming the western border. The winter time conditions in the interior are cold and harsh, with the climate near the coast being very hot and dry throughout most of the year. The majority of the region's wine production takes place in the central areas of the eastern and western coastlines.[2]

The Cirò wine region is located in the eastern foothills of the La Sila region and extends to the Ionian coast. The region's classico (or heartland) is centered on the comuni of Cirò and Cirò Marina in the province of Crotone. The soil of this area is predominantly calcareous marl with some clay and sand deposits. The wines of the regions are predominantly red containing at least 95% of the Gaglioppo grape and up to 5% of the white Greco bianco and Trebbiano grapes permitted. Rosés and white wines from at least 90% Greco bianco and up to 10% Trebbiano are also made in Cirò but in very limited quantities. While a common synonym of Trebbiano is Greco, the grape is separate and distinct from the Calabrian wine grape Greco bianco. The designation of Cirò classico will only appear on red wines. Red Cirò is typically very tannic and full bodied with strong fruit presences. It is often meant to be consumed 3–4 years after vintage but can take more time to soften the tannins.[2] It is said that Cirò was offered to winners of the ancient Olympics.[5] 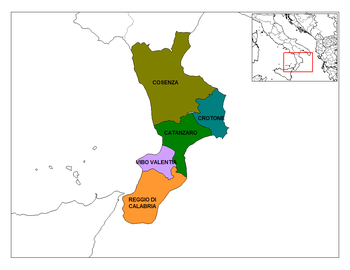 Of the remaining 11 DOC regions, Melissa and Isola di Capo Rizzuto are located near Cirò along the Ionian coast. In the far southern province of Reggio Calabria are the Bianco and Bivongi regions. The western wine regions are located in the provinces of Catanzaro and Cosenza. They include the DOCs of Donnici, Lamezia Terme, Pollino, San Vito di Luzzi, Savuto, Scavigna and Verbicaro.[2]