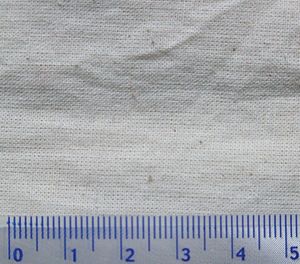 A piece of calico used in a shopping bag

Calico (in British usage, 1505,[1] AmE "muslin") is a plain-woven textile made from unbleached and often not fully processed cotton. It may contain unseparated husk parts, for example. The fabric is less coarse and thick than canvas or denim, but it is still very cheap owing to its unfinished and undyed appearance.

The fabric was originally from the city of Kozhikode (known by the English as Calicut) in southwestern India. It was made by the traditional weavers called cāliyans. The raw fabric was dyed and printed in bright hues, and calico prints became popular in Europe. 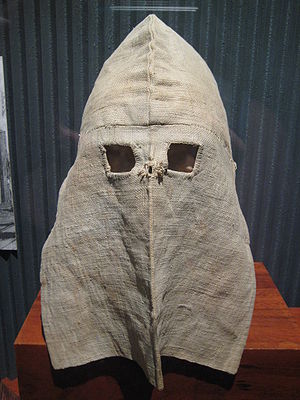 ca. 1875: Calico hoods were worn by all prisoners in solitary confinement when outside their cells (Location: Old Melbourne Gaol, Australia)

Calico originated in Kozhikode (also known as Calicut, from which the name of the textile came) in southwestern India during the 11th century.[2] The cloth was known as "cāliyan" to the natives.[3]

It was mentioned in Indian literature by the 12th century when the writer Hēmacandra described calico fabric prints with a lotus design.[2] By the 15th century calico from Gujǎrāt made its appearance in Egypt.[2] Trade with Europe followed from the 17th century onwards.[2]

Calico was woven using Sūrat cotton for both the warp and weft.

In the 18th century, England was famous for its woollen and worsted cloth. That industry, centred in the east and south in towns such as Norwich, jealously protected their product. Cotton processing was tiny: in 1701 only 1,985,868 pounds (900,775 kg) of cotton-wool was imported into England, and by 1730 this had fallen to 1,545,472 pounds (701,014 kg). This was due to commercial legislation to protect the woollen industry.[4] Cheap calico prints, imported by the East India Company from Hindustān (India), had become popular. In 1700 an Act of Parliament was passed to prevent the importation of dyed or printed calicoes from India, China or Persia. This caused grey cloth (calico that had not been finished—dyed or printed) to be imported instead, and these were printed in southern England with the popular patterns. Also, Lancashire businessmen produced grey cloth with linen warp and cotton weft, known as fustian, which they sent to London to be finished.[4] Cotton-wool imports recovered and by 1720 were almost back to their 1701 levels. Again the woollen manufacturers, in true protectionist style, claimed that this was taking away jobs from workers in Coventry.[5] Another law was passed, to fine anyone caught wearing any printed or stained calico; muslins, neckcloths and fustians were exempted. It was this exemption that the Lancashire manufactures exploited. The use of coloured cotton weft with linen warp was permitted by the 1736 Manchester Act. There now was an artificial demand for woven cloth. In 1764, 3,870,392 pounds (1,755,580 kg) of cotton-wool was imported.[6] It has been noted that this was a key part of the process of the reduction of the Indian economy from sophisticated textile production to a mere supplier of raw materials which occurred under colonial rule, a process described by Nehru and more recent scholars as "de-industrialization."[7] 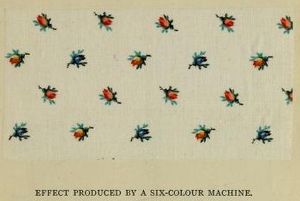 Sample of calico printed with a six-colour machine by Walter Crum & Co., from Frederick Crace Calvert, Dyeing and Calico Printing (1878).

Early Indian chintzes, that is a glazed calico with large floral pattern, were primarily produced by painting techniques.[8] Later, the hues were applied by means of wooden blocks, and it was the wooden block printing that was used in London. Confusingly, linen and silk that was printed by this method was known as linen calicoes and silk calicoes. The early European calicoes (1680) would thus be a cheap equal weft and warp plain weave cotton fabric in white, cream or unbleached cotton, with a block printed design using a single alizarin dye, fixed with two mordants giving a red and black pattern. Polychromatic prints could be done, with two sets of blocks and an additional blue dye. The Indian taste was for dark printed backgrounds while the European market preferred a pattern on a cream base. As the century progressed the European preference moved from the large chintz patterns to smaller, tighter patterns.[9]

Thomas Bell patented the technique of printing by copper rollers in 1783, and the first machine was set up by Livesey, Hargreaves and Company near Preston in 1785. Production of printed cloth in Lancashire in 1750 was estimated to be 50,000 pieces of 30 yards (27 m), but in 1850 it was 20,000,000 pieces.[8] From 1888, block printing was limited to short run specialist jobs. After 1880, profits from printing became smaller, there was over capacity and the firms started to form combines. The first was when 3 Scottish firms formed the United Turkey Red Co. Ltd in 1897, and the second, in 1899, was the much larger Calico Printers' Association. 46 printing concerns and 13 merchants combined, representing 85% of the British printing capacity. Some of this capacity was removed and in 1901 they had 48% of the trade. In 1916, they and the other printers joined and formed a trade association. This then set minimum prices for each 'price section' of the industry. This held until 1954 when it was challenged by the government Monopolies Commission. Over the intervening period much trade had been lost overseas.[10]

In the UK, Australia and New Zealand:

Printed calico was imported into the United States from Lancashire in the 1780s, and here a linguistic separation occurred, while Europe maintained the word calico for the fabric, in the States it was used to refer to the printed design.[9]

These colorful, small-patterned printed fabrics gave rise to the use of the word calico to describe a cat coat color: "calico cat". The patterned fabric also gave its name to two species of North American crabs; see the calico crab. [9]