The Supreme Court of California is the court of last resort in the courts of the State of California. It is headquartered in San Francisco and regularly holds sessions in Los Angeles and Sacramento. Its decisions are binding on all other California state courts.[1]

According to the California Constitution, to be considered for appointment, a person must be an attorney admitted to practice in California or have served as a judge of a California court for 10 years immediately preceding the appointment.

To fill a vacant position, the Governor must first submit a candidate's name to the Commission on Judicial Nominees Evaluation of the State Bar of California, which prepares and returns a thorough confidential evaluation of the candidate. Next, the Governor officially nominates the candidate, who must then be evaluated by the Commission on Judicial Appointments, which consists of the Chief Justice of California, the Attorney General of California, and a senior presiding justice of the California Courts of Appeal. The Commission holds a public hearing and if satisfied with the nominee's qualifications, confirms the nomination. The nominee can then immediately fill an existing vacancy, or replace a departing justice at the beginning of the next judicial term.

If a nominee is confirmed to fill a vacancy that arose partway through a judicial term, the justice must stand for retention during the next gubernatorial election. Voters then determine whether to retain the justice for the remainder of the judicial term. At the term's conclusion, justices must again undergo a statewide retention election for a full 12-year term.[2] If a majority votes "no," the seat becomes vacant and may be filled by the Governor.

The electorate has occasionally exercised the power not to retain justices. Chief Justice Rose Bird and Associate Justices Cruz Reynoso and Joseph Grodin were staunchly opposed to capital punishment and were subsequently removed in the 1986 general election. Newly reelected Governor George Deukmejian was then able to elevate Associate Justice Malcolm M. Lucas to Chief Justice and appoint three new associate justices (one to replace Lucas in his old post and two to replace Reynoso and Grodin).

Between 1879 and 1966, the court was divided into two three-justice panels, Department One and Department Two.[4] The chief justice divided cases evenly between the panels and also decided which cases would be heard en banc by the Court sitting as a whole. 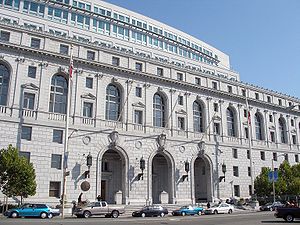 The Court's headquarters in San Francisco at the Earl Warren Building and Courthouse, which it shares with the Court of Appeal for the First District

After a constitutional amendment in 1966, the Court currently sits as a whole (all seven together) when hearing all appeals. When there is an open seat on the court, or if a justice recuses himself or herself on a given case, justices from the California Courts of Appeal are assigned by the chief justice to join the court for individual cases on a rotational basis.

The procedure for when all justices recuse themselves from a case has varied over time. For a 1992 case, the chief justice requested the presiding justice of a Court of Appeal district (different from the one where the case originated) to select six other Court of Appeal justices from his district, and they formed an acting Supreme Court for the purpose of deciding that one case.[5] However, in a more recent case where all members of the Court recused themselves when Governor Schwarzenegger sought a writ of mandate (Schwarzenegger v. Court of Appeal (Epstein)), seven justices of the Courts of Appeal were selected based on the regular rotational basis, not from the same district, with the most senior one serving as the acting chief justice, and that acting supreme court eventually denied the writ petition.[6] 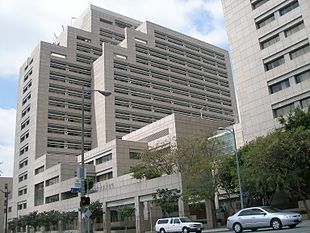 The Ronald Reagan State Building, the Supreme Court's branch office in Los Angeles, which it shares with the Court of Appeal for the Second District

The Court has exclusive and direct appellate jurisdiction in all California state death penalty cases, although it has sponsored a state constitutional amendment to allow it to assign death penalty appeals to the California Courts of Appeal.[7] It has discretionary appellate jurisdiction over all cases reviewed by the Courts of Appeal; the latter were created by a 1904 constitutional amendment to relieve the Supreme Court of most of its workload so the Court could then focus on dealing with non-frivolous appeals that involved important issues of law.[8]

The Court is open for business year-round (as opposed to operating only during scheduled "terms" as is commonplace in jurisdictions that observe the legal year). The Court hears oral argument at least one week per month, ten months each year (except July and August). Since 1878, it has regularly heard oral argument each year at San Francisco (four months), Los Angeles (four months), and Sacramento (two months).

Throughout the year (including July and August), the justices have a conference every Wednesday the Court is not hearing oral argument, with the exception of the last week, respectively, of November and December (Thanksgiving and New Year's). New opinions are published online on Monday and Thursday mornings at 10 a.m. Paper copies also become available through the clerk's office at that time.

The Court is one of the few U.S. courts apart from the U.S. Supreme Court that enjoys the privilege of having its opinions routinely published in three hardcover reporters. The Court's Reporter of Decisions contracts with a private publisher (currently LexisNexis) to publish the official reporter, California Reports, now in its fourth series; note that the series number changes whenever the publisher changes. West publishes California decisions in both the California Reporter (in its second series) and the Pacific Reporter (in its third series). (The New York Court of Appeals opinions are similarly published in three reporters.)

Since the late 1980s, the Court has turned away from the traditional use of law clerks, and has switched to permanent staff attorneys.[9] The Court has about 85 staff attorneys, some of whom are attached to particular justices; the rest are shared as a central staff. The advantage to this system is that the reduced turnover of staff attorneys (versus the traditional system of rotating through new law clerks every year) has improved the efficiency of the court in dealing with complex cases, particularly death penalty cases.

During its first half-century of operation, the Court struggled to keep up with its soaring caseload and very frequently fell behind, until the California Courts of Appeal were created in 1904. This resulted in provisions in the 1879 Constitution forcing the Court to decide all cases in writing with reasons given[10] (to get rid of minor cases, it had often given summary dispositions with no reasons given) and requiring California judges to certify in writing every month that no matter submitted for consideration had been outstanding for more than 90 days, or else they will not be paid.[11] To comply with the latter provision, the Court does not schedule oral argument until the justices have already studied the briefs, formulated their respective positions, and circulated draft opinions. Then, after the matter is formally "argued and submitted", the justices can polish and release their opinions well before reaching the 90-day deadline. This differs sharply from the practice in all other federal and state appellate courts, where judges can schedule oral argument not long after written briefing is finished, but then may take up to a year after oral argument to release opinions. 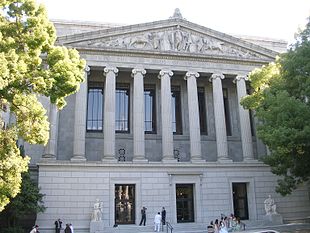 The Stanley Mosk Library and Courts Building, the Supreme Court's branch office in Sacramento, which it shares with the Court of Appeal for the Third District

As the Wall Street Journal said in 1972:

The state's high court over the past 20 years has won a reputation as perhaps the most innovative of the state judiciaries, setting precedents in areas of criminal justice, civil liberties, racial integration, and consumer protection that heavily influence other states and the federal bench.[12]

Statistical analyses conducted by LexisNexis personnel at the Court's request indicate that the decisions of the Supreme Court of California are by far the most followed of any state supreme court in the United States.[13] Between 1940 and 2005, 1,260 decisions of the Court were expressly followed by out-of-state courts (meaning that those courts expressly found the Court's reasoning persuasive and applied it to the cases before them).

The major film studios in and around Hollywood and the high-tech firms of Silicon Valley both fall under the Court's jurisdiction. Thus, the Court has decided a number of cases by, between, and against such companies, as well as several cases involving Hollywood celebrities and high-tech executives.

The California Supreme Court and all lower California state courts use a different writing style and citation system from the federal courts and many other state courts. California citations have the year between the names of the parties and the reference to the case reporter, as opposed to the national standard (the Bluebook) of putting the year at the end. For example, the famous case Marvin v. Marvin, which established the standard for non-marital partners' ability to sue for their contributions to the partnership, is rendered Marvin v. Marvin (1976) 18 Cal.3d 660 [134 Cal.Rptr. 815, 557 P.2d 106] in California style, while it would be Marvin v. Marvin, 18 Cal. 3d 660, 557 P.2d 106, 134 Cal. Rptr. 815 (1976), in Bluebook style. The California citation style, however, has always been the norm of common law jurisdictions outside the United States, including England, Canada and Australia.

While the U.S. Supreme Court justices indicate the author of an opinion and who has "joined" the opinion at the start of the opinion, California justices always sign a majority opinion at the end, followed by "WE CONCUR," and then the names of the joining justices. California judges are traditionally not supposed to use certain ungrammatical terms in their opinions, which has led to embarrassing fights between judges and the editor of the state's official reporters. California has traditionally avoided the use of certain French and Latin phrases like en banc, certiorari, and mandamus, so California judges and attorneys use "in bank," "review," and "mandate" instead (though "in bank" has become quite rare after 1974).

Finally, the Court has the power to "depublish" opinions by the Courts of Appeal (as opposed to the federal practice of not publishing certain "unpublished" opinions at all in the federal case reporters).[14] This means that even though the opinion has already been published in the official state reporters, it will be binding only upon the parties.[15] Stare decisis does not apply, and any new rules articulated will not be applied in future cases. Similarly, the California Supreme Court has the power to "publish" opinions by the California Courts of Appeal which were initially not published.[14]

The Court has handed down many important and influential decisions, of which some are listed below (ordered by date descending). Most of the decisions listed below were landmark decisions that were the first such decisions in the U.S. or the world.

Main article: List of Justices of the Supreme Court of California

Media related to Supreme Court of California at Wikimedia Commons