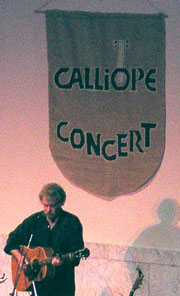 Calliope: Pittsburgh Folk Music Society is an organization that promotes folk music and folk dance in the Pittsburgh, Pennsylvania, area. The Society started in the late 1960s, when performances were often held in George Balderose's house. As time went on, the Society grew and eventually began renting out other performance venues for its shows. Since 1976, Calliope has been a nonprofit educational and presenting organization that promotes and preserves traditional and contemporary folk music and its allied arts.[1] Today, Calliope sponsors various musical performances, a school of music, and now Rootz: The Green City Music Festival.