listen (help·info) (Sicilian: Nissa or Cartanissetta) is the 588-metre (1,929 ft) high[1] comune and capital of the province of Caltanissetta located in the western interior of Sicily, Italy. Its inhabitants are called nisseni.

The city, which in 2013 had a population of 63,034,[2] is the 14th comune in Italy for its extension and the sixth highest comune and capital of province, the second after the Sicilian city of Enna.

The patron is Saint Michael the Archangel, to whom the cathedral is dedicated.[3]

Caltanissetta is one of few Italian provinces with an enclave, the comune of Resuttano which is totally surrounded by Palermo's province territory.[4]

Caltanissetta is located in a geographically important position dominating the whole valley of the Salso, which extends to include the nearby Enna. Morphologically aligned perfectly matches the surrounding area, very harsh and composition of limestone and clay. The city lies between three hills (Sant'Anna, Monte San Giuliano e Poggio Sant'Elia)[5] which, unwilling to bow, form a basin into which part of the historical center and the south comprise.

The maccalube (singular maccaluba, from Arabic مقلوبة maqlūbah, '(a land) that turns over', from the verb قلب qalaba 'to turn over, turn upside down, invert') are a particular and rare phenomenon of sedimentary volcanism occurring in the Terrapelata area of Caltanissetta, the so-called Hill of the Volcanoes near the village of Santa Barbara. This is an area of barren hills, with a color ranging from white to dark gray, where mud volcanoes around one meter high stand on a volcanic sediment. The phenomenon is related to the presence of very large clay soils, interspersed with layers of salt water, towering over methane gas bubbles subjected to pressure. When gas breaks through the soil and rises to the surface, carrying with it sediments of clay and water, a cone of clay, whose top is similar to a volcanic crater, forms. In these areas, the consistency of the liquid clay sludge does not allow the formation of real volcanic cones.

The maccalube emergency of August 2008

On the 20th of August 2008 a state of emergency was declared because of the events involving the Santa Barbara district in Caltanissetta in the previous days. During the morning of August 11, geological instability caused the opening of some breaks in the soil from ten centimetres to one metre large. Damages to buildings followed in two areas 2.5 kilometres (1.6 miles) distant, that of the maccalube and the western part of the city centre. These damages worsened after an eruption of mud, water and gas happened some hours later the same day. For seven minutes, a 30 metres (98 feet) high explosion created a mud deposit, 30 metres (98 ft) thick and 30 metres (98 ft) large. On August 19, the first manifestations of new maccalube appeared at the top of the mud layer where water and mud had come out after the eruption.

The Terrapelata phenomenon has been known for at least two centuries. The Nisseno abbot Salvatore Li Volsi (1797–1834), expert in natural and agricultural sciences, wrote "Sul vulcano aereo di Terrapilata in Caltanissetta" ('On the aerial volcano of Terrapelata in Caltanissetta') about similar events that happened between 1783 and 1823, which he attributed to large-scale instability. In recent decades the events have gradually subsided, creating inactive maccalube. In September 2008, 68 craters out of 98 were active, 17 dormant, and the others fossilized.

The events of August 11 are similar to those of February 14 and 15, 2002. But those of August were characteristic of a more relevant explosion and of instability in the populated area of the town. These, in the past, had extended even further into the city area, but they had never before happened at the same time as the explosions.[6]

Caltanissetta's origins can be traced back to 406 BC, when admiral Nicia of Hamilcar's siege force from Carthage established a fort at the site, later called Castra Nicia (Fort Nicia).

After the Second Punic War, Castra Nicia came under Roman rule, but as in the rest of Sicily, the influence of the invaders remained superficial.

In AD 829, the city was occupied by the Saracens. The similarity of the Carthaginian name to the Arabic word نساء nisā’ (meaning 'women') resulted in the Saracen name of قلعة النساء Qal‘at al-Nisā’ ('Fort of the Women'),[7] which has since been Italianized to Caltanissetta. The settlement was captured by the Normans in 1086. A charter was granted to the town in accordance with count Roger Borsa's vast plan for the urbanisation of Sicily and the urban plan that is still in evidence today was laid out.

After the Normans the city was under the Hohenstaufen, the Anjou and the Catalan-Aragonese kings, who gave it the title of county. Here Frederick II of Sicily was proclaimed king. The city was the seat of another Parliament who aimed to set the disputes arisen during the reign of Frederick III (1355–1377).

In 1406 Caltanissetta became a fief of the noble Spanish family Moncada,[3] which already owned the estate of Paternò, and subsequently decayed deeply. In 1539 the construction of the Cathedral was started and in 1566 a notable bridge was built over the Salso River. In this period the city began to expand outside the walls, and new quarters (Santa Flavia, San Rocco degli Zingari and San Francesco, which included the medieval village of Arab origin) were created. The quartiers were divided by the construction of two roads that crossed roughly perpendicular to a central square (now Piazza Garibaldi): the Corso Vittorio Emanuele current (west-east) and the current Corso Umberto I (north-south).

On July 8, 1718 the city was assaulted by Piemontese troops, which caused large losses in the population. In 1787 Johann Wolfgang Goethe visited it.

In 1812, after 406 years, the Moncada seignory ended, as the feudal constitution was abolished and Caltanissetta turned into the 22nd Comarca of Sicily. In 1819 it was declared capital of the province, but one year later it was sacked as a punishment for its loyalty to the House of Bourbon. In 1844 it was elevated to a bishopric seat.

After many Nisseni had taken part in his Mille's ("the Thousand's") deeds, Giuseppe Garibaldi entered the city, together with Cesare Abba and Alexandre Dumas, père. On October 22 of the same year a plebiscite declared Caltanissetta part of the new Kingdom of Italy.

After the unification of Italy was involved in a great economic boom largely due to intense mining of sulfur, but it was accompanied by various misfortunes: 47 people died due to an explosion of fire damp in the mine of Trabonella on the 27th of April 1867; 65 miners died on November 12, 1881 in Gessolungo because of another explosion; and another 51 died in 1911 in Deliella and Trabonella.

In 1875, however, the population rose against the prefect, who was fired. On April 8, 1878 the city was connected to a railway, ending the historical difficulties in reaching it. Three years later the king Umberto I visited Caltanissetta along with his wife Margherita of Savoy and his son Victor Emmanuel III.

During the Second World War, as part of the Allied landing in Sicily, he suffered several bombings (July 1943) during which 351 civilians were killed. On July 10, U.S. troops landed first in Licata by the 3^ infantry and after 8 days, on 18 July they entered and occupied the city. The U.S. 1^ infantry landed in Gela any hours after and they went toward Catania where meet the U.S 45 infantry that landed near Scoglitti.

The economy of Caltanissetta remained heavily reliant on agriculture until the 19th century, when a heavy sulfur mining industry began. Soon 275 sulfur mines were created in the Nissena province, employing 32,000 workers. A renowned firm established in the city is the Fratelli Averna SpA, producing a liqueur sold in the whole of Italy and beyond, the Amaro Averna.

The city has long been stricken by poverty, especially the west side.

The city's monuments include: 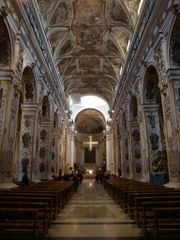 Inside the Cathedral, where you can see the series of frescoes by Guglielmo Borremans (1722) 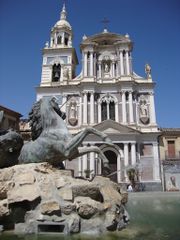 Caltanissetta has three museums: the Diocesan Mueum, the mineralogical Museum and the Regional Archeological Museum [8] which holds displays from mostly prehistoric times and include finds from digs conducted in the 1950s, including vases and tools from the Bronze Age and early Sicilian ceramics.

In the neighbourhood of Caltanissetta other sites can be seen: