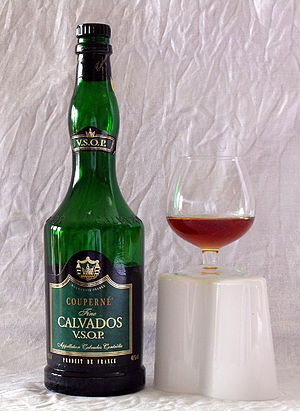 Calvados (French pronunciation: ​[kal.va.dos]) is an apple brandy from the French region of Lower Normandy (Basse-Normandie). 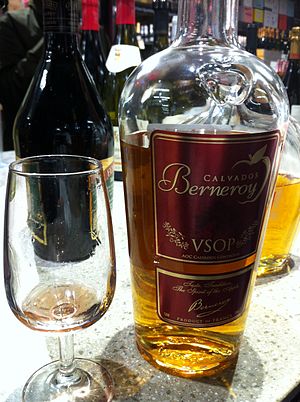 Cider is a pan-European beverage that appears outside of the endemic region suitable for the cultivation of grapes. The production of cider is noted by Roman occupiers, and the tradition maintained in the band of western Celtic territories. Records indicate that Charlemagne was instrumental in fostering a culture of orchards and production during his reign - although its status as a key economic driver was not established until the Norman period.[1] By the fifteenth century, cider consumption paralleled that of wine, and the introduction of new apple varietals and processes from Spain further entrenched cider production in the regions of Normandy and Brittany.[2] In the 17th century, the traditional cider farms expanded, but taxation and prohibition of cider brandies were enforced elsewhere than Brittany, Maine, and Normandy. The area known as "Calvados" was created after the French Revolution, but eau de vie de cidre was already called calvados in common usage.[3] In the 19th century, output increased with industrial distillation and the working class fashion for café-calva. When a phylloxera outbreak in the last quarter of the 19th century devastated the vineyards of France and Europe, calvados experienced a "golden age". During World War I, cider brandy was requisitioned for use in armaments due to its alcohol content.[4] The appellation contrôlée regulations officially gave calvados a protected name in 1942. After the war, many cider houses and distilleries were reconstructed, mainly in the Pays d'Auge. Many of the traditional farmhouse structures were replaced by modern agriculture with high output. The Calvados appellation system was revised in 1984 and 1996. Pommeau got its recognition in 1991; in 1997, an appellation for Domfront with 30% pears was created. 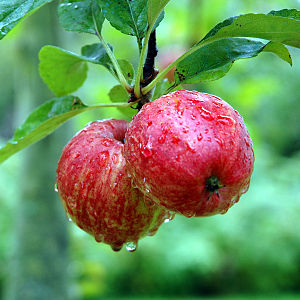 The fruit is harvested and pressed into a juice that is fermented into a dry cider. It is then distilled into eau de vie. After two years of aging in oak casks, it can be sold as calvados. The longer it is aged, the smoother the drink may become. Typically, the maturation goes on for several years. 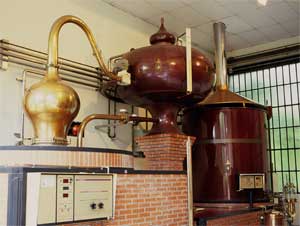 The appellation of AOC (appellation d'origine contrôlée) for calvados authorizes double distillation for all calvados, but it is required for the calvados Pays d’Auge.

The usual arguments for and against the two processes are that the former process gives the spirit complexity and renders it suitable for longer aging, whilst the latter process gives the calvados a fresh and clean apple flavour but with less complexity. In fact, a growing belief indicates a well-operated column still can produce as complex and "age-able" calvados as double distillation.[citation needed] 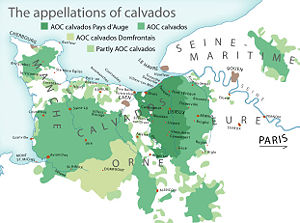 Map of the calvados region

As with French wines, calvados is governed by appellation contrôlée regulations. Broadly speaking, the regulation requires that the product originate from within either the Calvados, Manche, and Orne départements or parts of Eure, Mayenne, Sarthe, and Eure-et-Loir. Beyond that, there are requirements for minimum aging periods, methods of production, and varietals of cider apples or pears.

The age on the bottle refers to the youngest constituent of the blend. A blend is often composed of old and young calvados. Producers can also use the terms below to refer to the age.

High-quality calvados usually has parts which are much older than that mentioned. Calvados can be made from a single (generally, exceptionally good) year. When this happens, the label often carries that year.

A bottle of calvados Pays D'Auge

Calvados is the basis of the tradition of le trou Normand, or "the Norman hole". This is a small drink of calvados taken between courses in a very long meal, sometimes with apple or pear sorbet, supposedly to reawaken the appetite. Calvados can be served as an apéritif, blended in drinks, between meals, as a digestif, or with coffee. Well-made calvados should naturally be reminiscent of apples and pears, balanced with flavours of aging. The less-aged calvados distinguishes itself with its fresh apple and pear aromas. The longer the calvados is aged, the more the taste resembles that of any other aged brandy. As calvados ages, it may become golden or darker brown with orange elements and red mahogany. The nose and palate are delicate with concentration of aged apples and dried apricots balanced with butterscotch, nut, and chocolate aromas.[citation needed]

In the Canadian Forces

Calvados is the regimental drink of The Royal Canadian Hussars, Le Régiment de Hull, and Le Régiment de Maisonneuve, having been taken up as the units passed through Normandy following the D-Day invasion. Known as le trou normand, it is normally taken between courses at a regimental dinner.