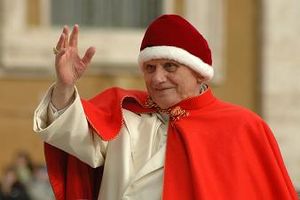 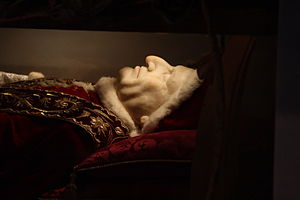 Pope John XXIII, the last Pope to commonly wear a camauro, is dressed with one.

A camauro (from the Latin camelaucum, from Greek kamelauchion, meaning "camel skin hat") is a cap traditionally worn by the Pope of the Catholic Church.

Papal camauros are of red wool or velvet with white ermine trim and are worn, usually in winter, in place of the zucchetto, which in turn takes the place of the biretta worn by other members of the clergy. Like the biretta worn by lower clergy and the mortarboard worn by academics, the camauro derives from the academic cap (the pileus), originally worn to protect tonsured clerical heads from the cold. It is often worn with a red mozzetta, also sometimes fur-lined.

The camauro has been part of the papal wardrobe since the 12th century. Until 1464, it was also worn by cardinals, without the ermine trim; from that date, the camauro became exclusively a papal garment and cardinals wore the scarlet biretta instead. The papal camauro fell into disuse after the death of John XXIII in 1963. It was revived once only in December 2005 by Benedict XVI. Benedict's wearing the hat prompted comparisons to Santa Claus and Father Christmas in the media;[1] St. Nicholas Thaumaturgos, who may have been the legendary Santa Claus, was bishop of Myra.

A camauro was also part of the headdress of the Doge of Venice, worn under the corno ducale or stiff peaked cap. Every Easter Monday the doge headed a procession from San Marco to the convent of San Zaccaria where the abbess presented him a new linen camauro crafted by the nuns.