Cambridge is a city in Dorchester County, Maryland, United States. The population was 12,326 at the 2010 census. It is the county seat of Dorchester County and the county's largest municipality. Cambridge is the fourth most populous city in Maryland's Eastern Shore region, after Salisbury, Elkton and Easton.[5][6] 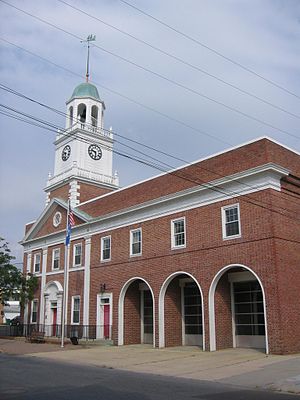 Settled by English colonists in 1684, Cambridge is one of the oldest colonial cities in Maryland.[7] At the time of English colonization, the Algonquian-speaking Choptank Indians were already living along the river of the same name. During the colonial years, the English colonists developed farming on the Eastern Shore. The largest plantations were devoted first to tobacco, and then mixed farming. Planters bought enslaved Africans to farm tobacco and mixed farming. The town was a trading center for the area. The town peer was the center for slave trading for the region, a sad history documented well in historical markers throughout the town center. It was incorporated officially in 1793,[8] and occupies part of the former Choptank Indian Reservation.[9] Cambridge was named after the town and county in England.[10] The town became a stop on the underground railroad, which had an extensive network of safe houses for slaves escaping to the north.

Cambridge developed food processing industries in the late 19th century, canning oysters, tomatoes and sweet potatoes. Industrial growth in Cambridge was led by the Phillips Packing Company, which eventually grew to become the area's largest employer. The company won contracts with the Department of Defense during the First and Second World wars that aided its growth. At its peak, it employed as many as 10,000 workers.[11] Changing tastes brought about a decline in business leading Phillips to downsize its operations. By the early 1960s the company ceased operations altogether. This led to widescale unemployment and added to the city's growing social problems.[12]

During the period from 1962 until 1967, Cambridge was a center of Civil Rights Movement protests as blacks sought access to work and housing. They also wanted to end racial segregation of schools and other public facilities. Race-related violence erupted in Cambridge in 1963 and 1967, and forces of the Maryland National Guard were assigned to the city to assist local authorities with peace-keeping efforts.[13] The leader of the radical movement was H. Rap Brown, the Minister of Justice of The Black Panther Party,[14] and local organizer Gloria Richardson. With the passage of the Civil Rights Act in 1964, public segregation in Cambridge officially ended.

In 2002, the city's economy was boosted by jobs and tourism associated with the opening of the 400-room Hyatt Regency Chesapeake Bay resort. This resort includes a golf course, spa, and marina. The resort was the site of the 2007 US House Republican Conference, which included an address by U.S. President George W. Bush.[15]

Cambridge was designated a Maryland Main Street community on July 1, 2003. Cambridge Main Street is a comprehensive downtown revitalization process created by the Maryland Department of Housing and Community Development. It plans to strengthen the economic potential of select cities around the state. The initiative has led to enhancements of its heritage tourism attractions. Together with other cities on the Eastern Shore, Cambridge is attracting more tourists. It has revitalized its downtown business district, part of which was designated a historical district in 1990.[16]

Cambridge is located at Lua error in Module:Coordinates at line 668: callParserFunction: function "#coordinates" was not found..[18]

Cambridge is on the southern bank of the Choptank River.

The climate in this area is characterized by hot, humid summers and generally mild to cool winters. According to the Köppen Climate Classification system, Cambridge has a humid subtropical climate, abbreviated "Cfa" on climate maps.[19]

There were 5,144 households of which 31.1% had children under the age of 18 living with them, 30.0% were married couples living together, 24.0% had a female householder with no husband present, 5.1% had a male householder with no wife present, and 40.9% were non-families. 34.1% of all households were made up of individuals and 12.8% had someone living alone who was 65 years of age or older. The average household size was 2.31 and the average family size was 2.93.

There were 4,629 households out of which 27.2% had children under the age of 18 living with them, 30.7% were married couples living together, 23.1% had a female householder with no husband present, and 41.7% were non-families. 36.1% of all households were made up of individuals and 16.7% had someone living alone who was 65 years of age or older. The average household size was 2.23 and the average family size was 2.88.

Cambridge was the inspiration of the fictional town Patamoke in James Michener's novel, Chesapeake. In the book, Patamoke is located on a fictitious promontory on the Choptank River, opposite of Cambridge's actual location.[22]

WCEM broadcasts AM and FM radio from Cambridge.

The Dorchester Banner is a twice-weekly newspaper published in Cambridge. The paper was founded by Lindsay C. Marshall and Armistead R. Michie as The Daily Banner, notable for being the Eastern Shore's first daily newspaper. The first issue was published on September 22, 1897.[23]

WBOC operates a virtual studio at the Cambridge Yacht Club. Weeknights they cover news affecting Cambridge and surrounding communities. This is known as their Mid-Shore Bureau.

The Cambridge-Dorchester Airport (FAA Identifier: CGE) is a county owned, public use airport located just southeast of the city of Cambridge. The airport is a general aviation facility with a lighted 4,477 foot asphalt runway.