The main University Library is one of the six legal deposit libraries in the United Kingdom and Ireland, the others being the British Library, the Bodleian Library in Oxford, the national libraries of Scotland and Wales, and Trinity College Library Dublin.

Through legal deposit, purchase and donation it receives around 100,000 items every year. The main University Library is unique amongst the Legal Deposit libraries in keeping a large proportion of its material on open access and in allowing some categories of reader (for example Cambridge academics, postgraduates and undergraduates) to borrow from its collections. The main University Library holds approximately 8 million items (including maps and sheet music).

Its original location was the University's "Old Schools" near Senate House until it outgrew the space there and a new library building was constructed in the 1930s. The library took over the site of a former military hospital, the "First Eastern General",[2] on the western edge of Cambridge city centre, now between Robinson College and Memorial Court, Clare College.

The current librarian is Anne Jarvis — the first woman to hold the post[3] — who succeeded Peter Fox on 1 April 2009. 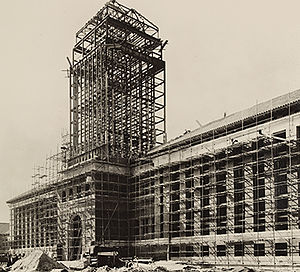 Construction of the current main UL building in the 1930s.

As early as the fourteenth century, Cambridge University owned a collection of manuscripts and some printed books. These would have been kept in chests along with other valuables, rather than in a library building as would be recognised today.[4]

A common library can be traced to the beginning of the 15th century, with the first direct reference to a ‘library’. In March 1416 the will of William Loring was proved, which bequeathed three volumes to the library thus: "Item volo quod omnes libri mei juris civilis remaneant in communi libraria scolarium universitatis Cantebrigg' in perpetuum."

The earliest catalogue is dated ca. 1424, at which time there were 122 volumes in the library.[5] The second earliest surviving catalogue was drawn up in 1473, and denotes 330 volumes. From the 16th century onwards it received generous donations or bequests of books and growth was considerably increased once the privilege of legal deposit had been granted. 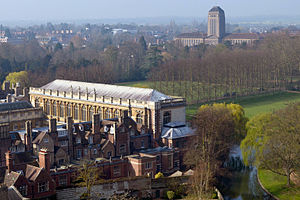 The current main University Library building was constructed between 1931 and 1934 under architect Giles Gilbert Scott, who also designed the neighbouring Clare Memorial Court (part of Clare College). It bears a marked resemblance to Scott's industrial architecture, a famous example of which is Bankside Power Station (the home of the Tate Modern). The library tower stands 157 feet (48 metres) tall, six feet shorter than the top of St John's College Chapel and ten feet taller than the peak of King's College Chapel. Contemporary reports stated that in opening the building, Chamberlain referred to it as "this magnificent erection",[citation needed] although this phrase is also attributed by tradition to George V. The fictional "Dark Tower" in the novel of that name (attributed to C. S. Lewis) was a replica of this building. Contrary to popular belief, pornographic material is not stored in the tower.[6]

The library has been extended several times. The main building houses the Japanese and Chinese collections in the Aoi Pavilion, an extension donated by Tadao Aoi and opened in 1998.

As a legal deposit library, the main University Library is entitled to claim without charge a copy of all books, journals, printed maps and music published in Britain and Ireland. This has contributed to the library's large holdings of over seven million books and 1.5 million periodicals. Between 800 to 1200 books a week are received through legal deposit.

From 6 April 2013, legal deposit also covers material published digitally and online, so that the Legal Deposit libraries can provide a national archive of the UK’s non-print published material, such as websites, blogs, ejournals and CD-ROMs.

The library is open to all members of the University of Cambridge. As is traditional amongst British university libraries, research postgraduates and academics from other UK universities are allowed reference-only access to the library's collection, and members of the public [1] may apply for access to use the Library for reference if their research requires access to materials held there.

The library is unique amongst the UK's legal deposit libraries in keeping a large proportion of its books on open access and in allowing some categories of reader (for example Cambridge academics, postgraduates and undergraduates) to borrow from its collection. It has a well-used "Tea Room" in which full meals, snacks and beverages are available. The library regularly puts on exhibitions, usually free to the public, and featuring items from its collections. 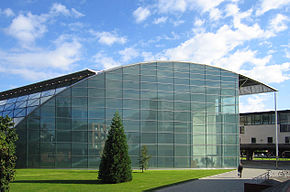 In 2002 the library began a project called "Janus" (after the Roman god) to provide a single point of networked access to catalogues of archives and manuscript collections held throughout Cambridge. A widening number of participating repositories - both University and non-University - promises in due course the near comprehensive coverage of archives in the city and surrounding area.[7]

In June 2010, Cambridge University announced that a £1.5 million donation would allow them to start digitising some of the collections in the University Library and eventually provide access to them free of charge over the Internet via the Cambridge Digital Library website. Initially the project will focus on two collections called "The Foundations of Faith" and "The Foundations of Science", which includes writings by Isaac Newton and his contemporaries, as well as documents from the Library's archives of Christian, Islamic and Jewish texts. 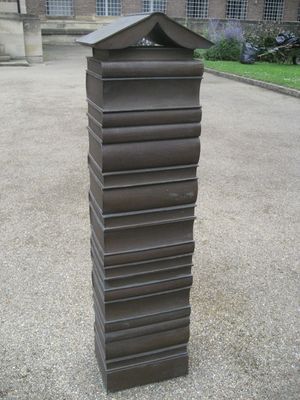 The official office of Librarian of the University was not established until 1577, when William James was appointed Librarian. The first set of regulations “for the Office of keeping the Library” were then formed in 1582.[8] Little is known of the administration before the late sixteenth century. Before 1577 the University Chaplain had overall responsibility of the Library amongst other duties. 16 potential Chaplain-Librarians have been identified.[8]

In 1721 the post of Principal Librarian (Protobibliothecarius) was created for Conyers Middleton "as a mark of sympathy with him in his opposition to Richard Bentley".[9] In 1828 this post was merged with that of Librarian (Bibliothecarius).

The main University Library hosts exhibitions in its Milstein Exhibition Centre. These change approximately every six to eight months and are open to all, free of charge. The current exhibition commemorates the gift of a large collection of books and manuscripts from George I, and is entitled: "His Royal Favour: The books that built the library".[10] It will run until 23 December 2015. 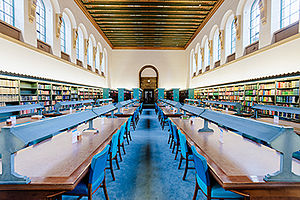 Interior of the main reading room

As part of its collection[11] of more than 8,000,000 volumes, the library contains a wealth of printed and manuscript material from earlier times. This includes:

Libraries within the University of Cambridge
Some manuscripts