i/ˈkæmbəsˈlæŋ/ (Scots: Cammuslangcode: sco is deprecated , from Scottish Gaelic: Camas Lang)[2] is a suburban town on the south-eastern outskirts of Glasgow, Scotland. It is within the local authority area of South Lanarkshire. Historically, it was a large civil parish incorporating the nearby hamlets of Newton, Flemington, and Halfway.[3]

The town is located just south of the River Clyde and about 6 miles (10 km) south-east of the centre of Glasgow. It has a long history of coal mining, iron and steel making, and ancillary engineering works, most recently Hoover. Tata Steel Europe's Clydebridge Steel Works and other smaller manufacturing businesses continue but most employment in the area comes from the distribution or service industries.

Cambuslang is an ancient part of Scotland where Iron Age remains loom over 21st century housing developments. The local geography explains a great deal of its history. It has been very prosperous over time, depending first upon its agricultural land, (supplying food, then wool, then linen), then the mineral resources under its soil (limestone and coal, and, to some extent, iron). These were jealously guarded by the medieval Church, and later by the local aristocracy, particularly the Duke of Hamilton (previously Barons of Cadzow and Earls of Arran).

Because of its relative prosperity, Cambuslang has been intimately concerned in the politics of the country (through the Hamilton connection) and of the local Church. Bishop John Cameron of Glasgow, the Scottish King James I's first minister, and Cardinal Beaton, a later first minister, were both Rectors of Cambuslang. This importance continued following the Protestant Reformation. From then until the Glorious Revolution a stream of Ministers of Cambuslang came, were expelled, or were re-instated, according to whether supporters of the King, Covenanters, or Oliver Cromwell were in power. The religious movements of the 18th century, including the Cambuslang Wark, were directly linked to similar movements in North America. The Scottish Enlightenment was well represented in the person of Rev Dr James Meek, the Minister. His troubles with his parishioners foreshadowed the split in the Church of Scotland during the 19th century.

The manufacturing industries that grew up from the agricultural and mineral resources attracted immigrants from all over Scotland and Ireland and other European countries. Cambuslang benefited at all times from its closeness to the burgeoning city of Glasgow, brought closer in the 18th century by a turnpike road then, in the 19th century, by a railway. In the 21st century, it continues to derive benefit from its proximity to Glasgow and to wider communication networks, particularly via the M74 motorway system.

Its increasing (and increasingly diverse) population posed problems, over the centuries, of employment and housing as well as of schooling and health, not all of which have been solved. In this regard, it is fairly typical of most Scottish towns. Cambuslang F.C. were founder members of the Scottish Football League, whose most notable achievement was being the runners-up of the Scottish Cup in 1888. They folded, but a new team, Cambuslang Rangers F.C., was established.

Cambuslang is in the Rutherglen and Hamilton West Constituency for elections to the House of Commons at Westminster.

Margaret Ferrier won the seat for the Scottish National Party in 2015, replacing Tom Greatrex, of the Labour Party.

Cambuslang is in the Glasgow Rutherglen Constituency for the Scottish Parliament at Holyrood. James Kelly retained the seat for Labour Party with 10237 votes, a majority of 18.1%. However, there was a swing of 6.5% from Labour to the Scottish National Party (SNP).

The councillors elected for Cambuslang Wards in the 2007 local elections were: 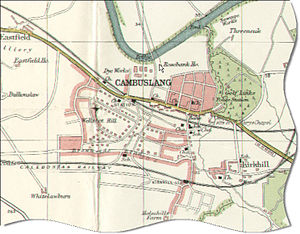 Cambuslang is located on a lengthy bend on the River Clyde, south-east of Glasgow. The town is accessible from the nearby M74; the nearby A724 links to Glasgow city centre and Hamilton; the town is also accessible by car from East Kilbride by the A725, A749 and then the B759. The town's railway station, Cambuslang, lies on the Argyle Line between North Glasgow and Lanark.

The Reverend Dr John Robertson, Minister of Cambuslang Kirk, described it, in the Second Statistical Account of Scotland 1845. “It is bounded by the Clyde on the north, which separates it from the Parish of Old Monkland; by the Calder on the east, which separates it from Blantyre; by part of Blantyre and Kilbryde, on the south; and by Carmunnock and Rutherglen on the west.” The highest points in this low-lying Parish are Dechmont Hill (602 ft) and Turnlaw (or Turnlea) Hill( 553)ft. There are remains of an iron age fort on Dechmont. The land slopes gently downwards to the North West to the River Clyde. The Clyde can overflow the lower parts. Dr Robertson is rather more optimistic, suggesting that ‘the town is traversed by a romantic brook running into the Clyde’. He describes the course of the brook as a ‘romantic gorge’. This is nowadays a park.

Cambuslang has an interesting range of churches, public buildings, schools, industrial and commercial buildings (see Buildings of Cambuslang). Its domestic buildings range from 19th-century mansions, villas and tenements to modern flats and detached houses, along with sheltered and nursing homes.

Cambuslang Park spans 27 acres (11 ha) encompassing the contrast of open park land and the Borgie Glen, which is a steep tree-lined ravine, containing a complex network of pathways. The park also features a pond, sport pitches, woodland areas and the Bandstand, which is a natural amphitheatre, near where the famous Cambuslang Wark took place in the 18th century.

There is a range of schooling in Cambuslang, and a history of further education colleges, although the latter no longer have a presence in the town.

Cambuslang College of the Building Trades was a specialist college established in the mid-20th century but it gradually expanded the trades and academic subjects taught. It became Cambuslang College of Further Education in the 1960s. It gradually expanded its provision at its East Kilbride Campus, and had facilities in Hamilton and Wishaw, but retained a substantial annex on Hamilton Road in the former Gateside School. It renamed itself South Lanarkshire College in 2000. in 2008, the Cambuslang campus closed and all South Lanarkshire College facilities were moved to a new, custom-built campus in East Kilbride.[6]

South Lanarkshire College has links with University of the West of Scotland, Hamilton Campus, a degree-awarding higher education institution, 3 miles (5 km) away in Hamilton, so that local students can progress through to degrees.

There has been a Parish school in Cambuslang at least since the Reformation, and probably before that. The schoolteacher was appointed and paid by the heritors, though he also charged fees. Free primary education came with the Education (Scotland) Act (1871).[7] though there had always been charitable provision.

The original Cambuslang Public School can be seen on Greenlees Road, where it is now Greenlees Care Home. It had been for some time the Cambuslang College of the Building Trades, which became part of Cambuslang College (now South Lanarkshire College). An even earlier school is now a Gospel Hall in Bushiehill Street.

The Cambuslang Subscription School of 1848 provided basic education to the children of miners and weavers in return for a few coppers. It was attractive to those who did not like the influence of the gentry and the minister on the parish school.

People who have either been attracted to Cambuslang, or who have gone out from there to make a mark on the world include a saint, a king, a queen, a cardinal, a bishop, a lord, a famous manufacturer, a garden designer, at least three significant clergyman, a famous retailer, a miners' leader, a leader of the RAF, a physicist, several poets, at least one writer; an Award-winning journalist who has interviewed a Pope, a Princess and a President; two historians, a pop singer, a Senator from Argentina, several world-famous actors and a few famous boxers and footballers!

St Cadoc (c 497 – c 570), also called "Cadow" or "Cattwg", reputedly founded a monastery on the site of the present Old Parish Church in the later sixth century. He is the patron saint of Cambuslang, where there is a modern primary school named after him. His feast day is 25 September. In medieval times, Cadoc was called on for help by (among others) deaf people and those suffering from cramp.

He was a Celtic saint – previously, a Prince of Glamorgan – who brought succour to the native Christians against the invading Saxons. Cambuslang is at the northernmost reach of the Welsh speaking Brythons, so he may well have visited here in his wanderings, or in an effort to secure help against the Saxons. He had travelled to Ireland, to Brittany (to visit the Welsh speaking monks there), Rome (the centre of Western Christianity) and Jerusalem (from where he brought back two altar stones that had touched the Holy Sepulchre. The Europe he walked through was being battered by the barbarian invasions, so it is not improbable that he managed to reach Cambuslang. However, as no mention is made in the legends of an expedition this far north, it might have been a disciple, or a pilgrim returning from Glamorgan with a relic, who established the church at Cambuslang.

Cadoc was cut down, while serving Mass, by a Saxon raiding party at "Benevenna", most probably near Weedon in Northamptonshire.

St Cadoc was prestigious enough in his lifetime for local chiefs to have recourse to him to settle disputes. This reputation lasted well into the Middle Ages, where solemn bonds and oaths were sworn over his (or his followers') remains. Just before the Reformation, a wealthy Cambuslang notable expressed in his will a desire to be interred "with the ashes of St Cadoc", in the Parish Kirk.

David Dale (1739–1806) was a Scottish industrialist and philanthropist. His efforts to establish a cotton-spinning factory at Flemington failed but he was very successful as co-founder of the New Lanark Mills in 1786. Dale owned the estate of Rosebank in Cambuslang, which he used as a summer retreat from his townhouse (reputedly still standing) in Charlotte Street Glasgow and to where he retired and lived until his death. The estate was sold after his death to the Caledonian Railway Company, which divided it in two to accommodate the new railway. The half to the north of the railway line, including Rosebank House, eventually became Rosebank Industrial Estate. The southern half was sold to Thomas Gray Buchanan, a Glasgow merchant, related to the Buchanan who established Buchanan Street in Glasgow, who established a country retreat at Wellshott House, but his son Michael sold off the lands to build suburban villas in the 1860s.

Rev Dr James Meek (1739–1810) was Minister of Cambuslang from 1774 until his death. He had been Dean of the Chapel at Glasgow University, when the Rector was Edmund Burke and the professors included the philosopher Thomas Reid. He was Moderator of the General Assembly of the Church of Scotland in 1795. He wrote the entry for Cambuslang in the First Statistical Account of Scotland. The cool, objective account in his report of the Cambuslang Wark remains the prime historical source for that event. He kept a detailed "Journal and Register of the Weather..." for each day over 29 years, with remarks on weather and events throughout Britain and the world. This Journal is still quoted in modern histories of the weather. He is buried in the Old Parish Church kirkyard, just inside the gate.