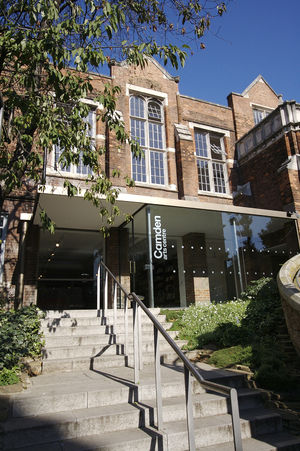 Camden Arts Centre in the London Borough of Camden, England, is a place for world-class contemporary art exhibitions and education. With artists at the core of the programme, Camden Arts Centre strives to involve members of the public in the ideas and processes of today's artists, and the artists who inspire them. The exhibition and education programmes are developed with equal significance and are continually intertwined. The changing programme includes exhibitions, artist residencies, off-site projects and artist-led activities and courses, ensuring Camden Arts Centre remains a place for seeing, making and talking about contemporary art.

Off-site artists' projects include new commissions and performance in areas such as King's Cross, London, and in local schools and community centres.

A special Bookshop is on site, as well as a Café and Garden.

Jenni Lomax OBE has been the Director of the Camden Arts Centre since 1990. In the 1970s, Lomax was part of the curatorial team assembled by Nicholas Serota at the Whitechapel Art Gallery. Lomax sits on the Board of Raven Row, a non-profit contemporary art exhibition centre in Spitalfields[1]

Under her stewardship, the Camden Arts Centre has established a programme of exhibitions, including solo shows by Anya Gallaccio, Tal R, Victor Grippo, Hanne Darboven, Eva Hesse and Angela de la Cruz whose first solo exhibition in the UK, entitled "After", was held at Camden Arts Centre in April and May 2010.She was nominated for the Turner Prize in 2010.[2]

The building and its history

Camden Arts Centre is situated at the corner of Arkwright Road and Finchley Road, NW3 in a Grade II listed premises, constructed as Hampstead Central Library and designed by the architect Arnold Taylor. The building was opened in 1897 by its benefactor Sir Henry Harben, then Deputy Chairman of the Prudential Assurance Company. Known as the Napoleon of insurance, Harben developed the British Prudential Insurance Company into one of the pioneer commercial marvels of the 19th century. The Victorian structure funded by Harben survived World War II, despite hits by enemy incendiary bombs in 1940 and the blast from a V2 rocket in 1945.

The library grew in size and was extended in the 1920s, however by 1964 a new facility opened in Swiss Cottage which was better able to cope with the demands of the modern library service and all stock was transferred to it.

Hampstead Arts Centre (renamed Camden Arts Centre in 1967) was created in 1965 providing the local community with classes in painting, life drawing, pottery, printing and basic design. The building’s integral qualities of simplicity, space and light were ideal for the showing of art and the first exhibition was held a year after the Centre was established. Inevitably, the site soon became a focal point for artists living locally.

Since the sixties, the artistic and education programmes at Camden Arts Centre have developed dramatically. Director Jenni Lomax OBE joined Camden Arts Centre in 1990, and has established an internationally acclaimed programme of exhibitions, residencies, artists’ projects and public events. She led the organisation through a major building refurbishment scheme which was completed in early 2004 by Tony Fretton Architects.[3]