Camel is a brand of cigarettes that was introduced by American company R.J. Reynolds Tobacco in 1913. Most current Camel cigarettes contain a blend of Turkish tobacco and Virginia tobacco. Early in 2008 the blend was changed as was the package design.

In 1913, R.J. Reynolds developed an innovation: the packaged cigarette.[1] Most tobacco users who smoked cigarettes preferred to roll their own, and there was thought to be no national market for pre-packaged cigarettes.[1] Reynolds worked to develop a flavor he thought would be more appealing than past products, creating the Camel cigarette, so named because it used Turkish paper,[1] in imitation of then-fashionable Egyptian cigarettes. Reynolds undercut competitors on the cost of the cigarettes, and within a year, he had sold 425 million packs of Camels.[1]

Camel cigarettes were originally blended to have a milder taste in contrast to brands that, at the time of its introduction, were considered much harsher. They were advance promoted, prior to official release, by a careful advertising campaign that included "teasers" which merely stated that "the Camels are coming"[1] (a play on the old Scottish folk song, "The Campbells Are Coming"). This marketing style was a prototype for attempts to sway public opinion that coincided with the United States' entry into World War I, and later World War II. Another promotion strategy was the use of a Circus camel, 'Old Joe', which was driven through town and used to distribute free cigarettes. The brand's catch-phrase slogan, used for decades, was "I'd walk a mile for a Camel!"

The most famous historical style of Camel cigarettes is the soft pack of the regular, unfiltered variety (generally known as Camel Straights or Regulars). These were the first blend of Camels to be released. Camel regulars achieved the zenith of their popularity through personalities such as news broadcaster Edward R. Murrow, who smoked up to four packs of Camel regulars per day, in effect using a Camel cigarette as his trademark.[2] 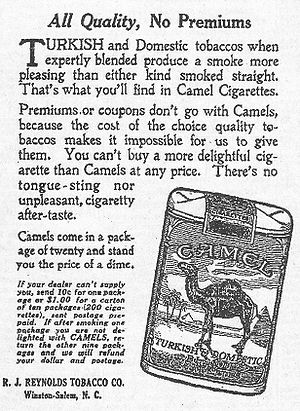 A 1915 Camels ad from The New York Times, offering a money-back guarantee and stating, "Premiums or coupons don't go with Camels, because the cost of the choice quality tobaccos makes it impossible for us to give them"

In late 1987, RJR created "Joe Camel" as the mascot for the brand. In 1991, the American Medical Association published a report stating that 5- and 6-year olds could more easily recognize Joe Camel than Mickey Mouse, Fred Flintstone, Bugs Bunny or even Barbie.[3] This led the association to ask RJR to terminate the Joe Camel campaign. RJR declined, but further appeals followed in 1993 and 1994. On July 10, 1997, the Joe Camel campaign was retired and replaced with a more adult campaign which appealed to the desires of twenty-somethings to meet—or be—beautiful and exotic women in 1930s attire and themes.

In Europe, Camel is also a brand of cigarette rolling papers and cigarette roll-your-own tobacco. It maintains a top 20 level brand of RYO tobacco and papers in Northern Europe with yearly expansion into Southern and Eastern Europe according to the European Subsidiary's annual report.

In 2005, Camel implemented new changes to the Oriental flavors by adding the name on the cigarette paper and changing the filter color and design. Also in 2005, Turkish Silvers were introduced. These serve as the ultra light version of the three Turkish blends. Turkish Royal serves as the "full flavor" version, and Turkish Gold serves as the "lights" version. A menthol version, Turkish Jade, was also part of the Turkish Blends but has since been discontinued. After burning, the text on the paper is often still visible on the ashes which is also seen in Camel straights.

Winston-Salem, North Carolina, the city where R.J. Reynolds was founded, is nicknamed "Camel City" because of the brand's popularity.

As of June 2012, Camel filters were discontinued in the United Kingdom. Camel Blue, the light version, are available from Tesco.

In 2013, Camel celebrated its 100th anniversary. Professor Robert N. Proctor of Stanford University commemorated the occasion with an editorial in the LA Times, noting that in the last century, Camel has sold over 4 trillion cigarettes.[5]

The tobacco is mostly a blend of Samsun and İzmir Turkish tobacco and Virginia tobacco.

The camel in the logo is of the dromedary variety. In languages other than English, a distinction is made between camels and dromedaries, so the name and image do not coincide.

The Camel pack is featured prominently in Tom Robbins' 1980 novel Still Life with Woodpecker, billed as "a love story that happens inside a pack of cigarettes". The book's artwork is modeled after a pack of Camels, and the package artwork and history are discussed extensively in the book. It is also mentioned that a pack of Camels is the best friend you have in prison.

The cover of the band Camel's album Mirage resembles the cigarette packaging.

A stylized drawing of the Camel cigarette pack is used as the front cover of the 1971 album Choice Quality Stuff/Anytime by the San Francisco psychedelic band It's a Beautiful Day.

The signature scene on most Camel cigarette packs shows a single dromedary standing on desert sand, with pyramids and palm trees in the background.

On the back of the cigarette pack is another desert scene, featuring this time bazaars and mosques. On European and some other non-U.S. versions, the desert scenes have been replaced by a health warning. 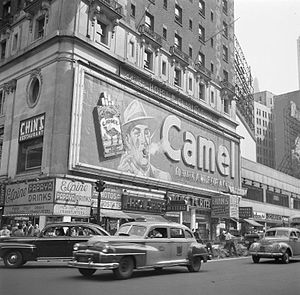 The Reynolds company commissioned Fred Otto Kleesattel in 1913 to draw the original camel.

Known as "Fritz", Kleesattel was a highly sought after graphic designer living in Louisville, Kentucky. He was hired through his company, Klee Ad Art, to design the packaging for the new Camel cigarettes' line. Klee Ad Art was also integral in devising designs for Four Roses Distillery, Heaven Hill Distilleries, and many other now immediately recognizable U.S. brands. While serving in the U.S. Army during World War I, Kleesattel worked as a camouflage artist, disguising buildings, vehicles and other potential targets by making them blend with their surroundings.

The reverse sides of many packs or boxes of Camel cigarettes display variations of the following text:

Turkish tobacco is the world's smoothest, most aromatic leaf. Blending it with more robust domestic tobaccos is the secret to Camel's distinctive flavor and world-class smoothness.

The reverse side of the five "Turkish Blend" cigarettes display this message along with a description that differs depending on the blend:

Turkish tobacco is the world's smoothest, most aromatic leaf.

The reverse side of unfiltered "soft pack" Camel cigarettes has displayed this text for many years, a theme also used by R. J. Reynolds in its advertising as early as 1915:

Don't look for premiums or coupons, as the cost of the tobaccos blended in Camel Cigarettes prohibits the use of them.

Or alternatively can be seen displaying the text (later removed from some packets with the introduction of health warning messages):

CAMEL cigarettes contain a blend of choice Turkish and American tobaccos to bring you full smoking satisfaction with CAMEL quality.

Camel Wides, starting in 2008, began displaying this on the reverse side of the pack:

The larger gauge of a Camel Wides cigarette makes for the smoothest, most flavorful way to enjoy Camel's distinctive blend of the finest Turkish and Domestic tobaccos.

Joe Camel was a controversial cartoon camel that primarily appeared in advertisements for Camel, but also appeared on "Camel Cash" and origami Pop-up print ads. Joe Camel came under scrutiny as some considered use of the character to be advertising directed at children. Camel paid millions of dollars to settle lawsuits accusing them of using Joe Camel to market smoking to children.[6] His image was removed from Camel Cash in July, 1997, and discontinued in advertisements.

"Camel Cash", or "C-Note" (C-Note = 5 US cents), was a coupon stuck to the back of filtered varieties of Camel cigarettes. It was made to resemble currency and could be exchanged for items from the Camel Cash catalogue. It was accompanied by a message telling smokers not to look for premiums or coupons on the cigarettes.

The artwork changed many times over the years, and in the past included the face of Joe Camel, much in the same way as presidents are featured on American currency. Camel Cash redemption expired on March 31, 2007. 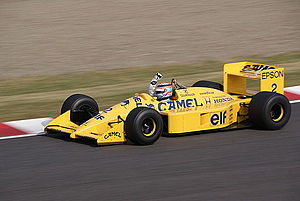 The Lotus 100T sponsored by Camel.

Camel was a sponsor of the 1986 FIFA World Cup.

In 2010, R.J. Reynolds planned to sell Camel packs showing one of ten locations to be visited by the Camel mascot, including Seattle, Washington; Austin, Texas; San Francisco, Las Vegas; New Orleans; Bonneville Flats, Utah; Sturgis, South Dakota; Route 66; and the Williamsburg neighborhood of Brooklyn. The Winston-Salem package showed a tobacco field and the city's skyline, including the former R.J. Reynolds headquarters. During a ten-week period, visitors to a web site were asked to guess which city would be next. Matthew Myers, president of Campaign for Tobacco-Free Kids, accused the company of targeting children once again, saying, "The new campaign cynically uses the names and images of trendy U.S. destinations … in an attempt to make Camel cigarettes cool again." David Howard of R.J. Reynolds emphasized the campaign was geared toward adults and pointed out only adults could access the website.[7][8][9]

New York City health commissioner Thomas Farley and the National Association of Attorneys General both sent Reynolds letters asking that the campaign be stopped. The organization said that it violated the 1998 tobacco settlement. Reynolds denied that children were being targeted and said the campaign did not go against the settlement. Other cities and states also stated their objections including San Francisco and Seattle.[9]