From Infogalactic: the planetary knowledge core
(Redirected from Camembert (cheese))
Jump to: navigation, search
For the French village, see Camembert, Orne.
Not to be confused with Brie.

Camembert (French pronunciation: ​[ka.mɑ̃.bɛʁ]) is a soft, creamy, surface-ripened cow's milk cheese. It was first made in the late 18th century at Camembert, Normandy in northern France.

The first camembert was made from unpasteurized milk, and the AOC variety "Camembert de Normandie" is required by law to be made only with unpasteurized milk. Many modern cheesemakers, however, use pasteurized milk for reasons of safety, compliance with regulations, or convenience.[1] 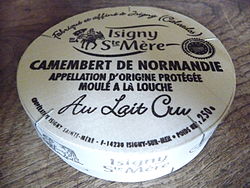 True Camembert cheese of Normandy made with unpasteurized milk

The cheese is made by inoculating warmed milk with mesophilic bacteria, then adding rennet and allowing the mixture to coagulate. The curd is then cut into roughly 1 cm (1/2 inch) cubes, salted, and transferred to low cylindrical camembert molds.[1] The molds are turned every six to twelve hours to allow the whey to drain evenly from the cut curds; after 48 hours, each mold contains a flat, cylindrical, solid cheese mass weighing generally 250 grams (about 9 oz). At this point the fresh cheese is hard, crumbly, and bland.

The surface of each cheese is then sprayed with an aqueous suspension of the mold Penicillium camemberti, and the cheeses are left to ripen for a legally required minimum of three weeks. This affinage produces the distinctive bloomy, edible rind and creamy interior texture characteristic of the cheese.[1] Once the cheeses are sufficiently ripe, they are wrapped in paper and may be placed in wooden boxes for transport. 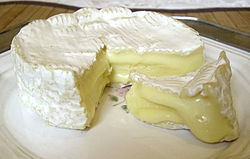 Camembert was reputedly first made in 1791 by Marie Harel, a farmer from Normandy, following advice from a priest who came from Brie.[2]

However, the origin of the cheese known today as camembert is more likely to rest with the beginnings of the industrialization of the cheesemaking process at the end of the 19th century.[3] In 1890, an engineer, M. Ridel, devised the wooden box which was used to carry the cheese and helped to send it for longer distances, in particular to America, where it became very popular. These boxes are still used today.

Before fungi were understood, the color of camembert rind was a matter of chance, most commonly blue-grey, with brown spots. From the early 20th century onwards, the rind has been more commonly pure white, but it was not until the mid-1970s that pure white became standard.

The cheese was famously issued to French troops during World War I, becoming firmly fixed in French popular culture as a result. It has many other roles in French culture, literature, and history. It is now internationally known, and many local varieties are made around the world.

The variety named "Camembert de Normandie" was granted a protected designation of origin in 1992 after the original AOC in 1983. The AOC Camembert can only be made from raw, unpasteurized milk from "Vaches Normandes" cows. Problems with hygiene regulations have caused restrictions on importation and sale in some countries, notably the US.

Overripe camembert contains an unpleasant, excessive amount of ammonia, which is produced by the same microorganisms required for ripening.[5]

Brie cheese is a similar soft cheese, also made from cow's milk. However, there are differences such as its origin, typical market shape, size, and flavor. Brie originates from the Île de France while camembert comes from Normandy. Traditionally, brie was produced in large wheels, either 22.9 cm (9 in) or 36.8 cm (14.5 in) in diameter,[6] and thus ripened more slowly than the smaller camembert cheeses. When sold, brie segments typically have been cut from the larger wheels (although some brie is sold as small, flat cylinders), and therefore its sides are not covered by the rind. By contrast, camembert is ripened as a small round cheese 10.2 cm (4 in) in diameter by 3.2 cm (1.26 in) thick and fully covered by rind. This ratio change between rind and paste makes camembert slightly stronger when compared to a brie ripened for the same amount of time. Once the rind is cut on camembert it typically has a more pungent aroma than brie. In terms of taste, camembert has a stronger, slightly sour, and sometimes chalky taste. The texture of camembert is softer than brie, and if warmed camembert will become creamier, whereas brie warms without losing as much structure. 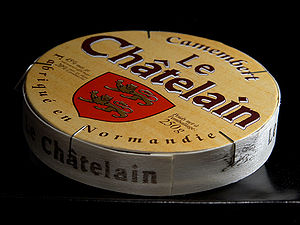 Typically camembert tends to be sold whole in thin, round, wooden containers made from poplar. Modern variations in packaging include cartons and tin cans, with a ring-pull tab for opening (Camembert in metallic boxes do not exist on the French market). The cardboard boxes are reserved for the low-cost camenberts. The product is the same as in the wooden container, wrapped dry in a paper/foil wrapper, and not immersed in brine or oil.

A similar cheese is produced in Hungary under the same name,[7] the Czech Republic under the name Hermelín and in Slovakia as 'encián' or 'plesnivec'. A Camembert-type cheese is also manufactured in Cornwall, UK, and marketed as "Cornish Camembert".[8]