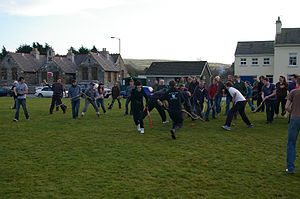 Cammag (Manx pronunciation: [kʰamaɡ][1]) is a team sport originating on the Isle of Man. It is closely related to the Scottish game of shinty and is similar to the Irish hurling. Once the most widespread sport on Man, it ceased to be played around 1900 after the introduction of association football,[2] though it has experienced a revival in the 21st century.

Equipment involves a stick (Manx: camman, meaning "little curved thing"[2]) and a ball (crick or crig) with anything between four and two hundred players. Sometimes whole towns and villages took part, or even played each other. The cammag can be any stick with a bent end, and is similar in design to the caman in shinty, both unlike the Irish camán, having no blade. A gorse wood cammag, if of suitable size and shape, was a very much treasured possession. The crick can be made from cork or wood, and varied from circular to egg-shaped, sized from approximately two inches in circumference to the size of a fist. Old accounts tell that the crick was sometimes covered in cloth or leather.[3]

The Manx word Cammag, as in modern Scottish Gaelic and Irish camán, is derived from the Gaelic root word cam, meaning bent.[4]

Cammag season started on Hunt the Wren Day (26 December) and was only played by men (of all ages) during the winter. Corris's Close (now Athol Street) was the chief playing-ground in the town of Peel.

In modern times, an annual match of cammag is played in St John's.

An open Cammag match is played on Boxing Day/Hunt the Wren Day (26 December) on the Tynwald field at St John's. Matches are held between the North and the South of the island. Research by David Fisher in the archives of Manx National Heritage clarified that the Northern line historically ran from the Grand Island Hotel to Niarbyl, south of Peel. The game usually starts at 2 p.m., and is played over three 20-minute periods.

Teams are informal and unregulated, often numbering more than 50 people (both males and females) on the field - historic commentary cites matches played with anywhere between four and two hundred players.[5] In recent years, the match has been refereed by local radio presenter John Kaneen who revived the game in recent years. Playing equipment is supposed to consist of a bent stick, though there are many variations on the design. The game is a physically demanding contact sport, and protective equipment is advised.

The game usually revolves around a central pack, where a large number of players are confined in a small space, and the ball cannot move large distances. Breakout attacks down the open wings occasionally take place, though the large number of players in the centre of the field makes it difficult to attack the staked-out goals from outside positions.

The 2005 St John's match resulted in a 4-2 win for the North, despite being heavily outnumbered by a Southern side that included Peel for the second time. The North managed to control the game by holding the ball in the centre pack (where a relatively small number of players have access to the ball), and playing a solid defensive game. Scorers for the North were David Fisher(2), Ean Radcliffe and Roy Kennaugh.

The 2006 St John's match resulted in a 4-4 draw, the North coming back from a 4-2 deficit at the end of the second period to draw the match level. Referee John Kaneen decided that the South should hold the cup until the 2007 match.

The 2008 match resulted in a 5-4 win for the North. The North closed a 4-1 deficit in the final third of the match to draw level at full-time, then scored in the sudden death period to win the match. Scorers for the North included Ean Radcliffe (pushover goal), Rob Teare, Paul Rogers and Jole Fisher (2 goals).

The 2009 match resulted in a 4-3 win for the North. The South led by 2-0 at the end of the first period, but failed to hold on to their lead. At the end of the final period, the match was drawn at 3-3, and went to extra time. The North scored to win the match 4-3. The match was an intensely physical game that included many ground mauls.

The 2010 match resulted in a 3-2 win for the South. The game was refereed by David Fisher, John Kaneen and Stewart Bennett. The match was dominated by a much larger southern side, including four goalkeepers at one point, but the North held on for a 2-2 draw at the end of the third half. Scorers for the North were Jole Fisher and Ean Radcliffe, whilst well known player John "Dog" Collister kept goal. The match went to sudden death, which was won by the South who massed for a pushover goal.

The 2011 match resulted in a 3-0 win for the South. The southern side held the majority of possession, and the South's much larger numbers meant that the northern side was on the defensive for much of the match.[6]

The 2012 match was a landslide 9-4 victory for the North, the largest score in recent memory. Heavy rain meant challenging conditions, but the sides were evenly matched for most of the game and until the third half, the score remained at 4-4. The North secured victory with a 5-goal streak in the last half for a convincing win. Scorers for the North included Oli Trainor and Ean Radcliffe (3).

The 2013 match was once again mired in controversy as scoring was disputed, a common thing in Cammag matches - although the South put three goals over the line to the North's two, referee Paul Callister ruled that it was unclear whether an early goal for the South should have been allowed due to being too high over the keeper, and that a late goal for the South had been kicked over the line, which would be disqualified as all scoring has to be with the stick. Scorers for the North were John Faragher and Ean Radcliffe, in the face of superb goalkeeping from the South which denied the North another overwhelming victory. After the one-sided victory by the North in the 2012 match, it was decided that the South should hold the cup for the year.

The 2015 match resulted in a 7-1 victory for the North. The number of players was much reduced due to heavy rain, though the sides were relatively even in numbers for the first time in many years. The skillful North led from early in the match, with the South scoring a consolation goal late in the third half. Scorers for the North included David Fisher, who was also refereeing the match.

In January 2014 it was announced that the Isle of Man Cammag Association had been founded to act as the governing body for the game. Within 18 months it is expected that a league of 7 teams will be created. Each team will play each other at home and away, meaning each team will play 12 games. The rules will be set out in the Isle of Man Cammag Association handbook. The first game is expected to take place on July 5, 2015.