Camp William Penn was a Union Army training camp located in Cheltenham Township, Pennsylvania from 1863 to 1865, notable for being the first training ground dedicated to African American troops who enlisted in the United States Army during the American Civil War. Some 11,000 free blacks and escaped slaves were trained here, including 8,612 from Pennsylvania, the most black troops recruited during the war from any northern state.[1]

After Abraham Lincoln issued the Emancipation Proclamation, many freed blacks stepped forward to fight in the army. Thousands of ex-slaves and free blacks displayed a desire to prove they were citizens, like the soldiers currently fighting the war. Often blacks who enlisted were treated rudely and were turned away. Camp William Penn became the "training camp for colored troops enlisted into the United States Army."[2] 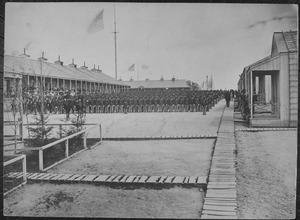 The family of Lucretia Mott, a women's rights advocate, leased land they owned to the Federal government so that a training camp could be established there. This parcel was located in Chelten Hills in Cheltenham Township, Pennsylvania, just outside the city limits of Philadelphia. Originally, the camp was to be named after Lincoln's Secretary of War, Edwin M. Stanton, but, when final plans were approved, the camp was named William Penn.

All of the troops at Camp William Penn were black volunteers who came from a number of different states. Lt. Col. Louis Wagner, who was recovering from wounds received at the Battle of Chancellorsville, volunteered to take command of the camp in early 1863. The camp was the largest federal training facility for African-American soldiers. The camp, which was fully operational by July 4, 1863, served as the training ground for eleven regiments comprising nearly 11,000 men in its two years of existence.

Local antagonists closely observed the activities at Camp William Penn. Many worried that black recruits might defy government authority. When Frederick Douglass entered the grounds to speak with the black recruits, he observed some disturbing activities. Douglass noted black recruits being punished for various military infractions and was deeply disturbed. Many of these recruits were men who already bore the scars of slavery. Douglass told the troops: "You are a spectacle for men and angels. You are in a manner to answer the question, can the black man be a soldier? That we can now make soldiers of these men there can be no doubt."[3]

Because of continuing racism, the black troops were not treated equally. Many soldiers complained of harsh treatment. Still, Camp William Penn symbolized an advancement of importance for African-Americans. Although the white community seemed to lack tolerance for the soldiers, Colonel Louis Wagner insisted that his black soldiers ignore segregationist policies. Confederate soldiers hated commanders of black regiments and when black troops were taken prisoner, the commanders were often executed with their men.

Famed black artist David Bustill Bowser designed the unit's regimental flag. The flag depicted "the Goddess of Liberty holding a flag while exhorting a freedman dressed as a soldier to do his duty."[3]