Campbell University is a coeducational, private university in the U.S. state of North Carolina. Its main campus is located in the community of Buies Creek; its law school moved from Buies Creek to a new campus in the state capital of Raleigh in 2009. Campbell has an approximately equal number of male and female students. It is a university of the liberal arts and sciences, offering both theory and vocational education and hosting several professional schools. 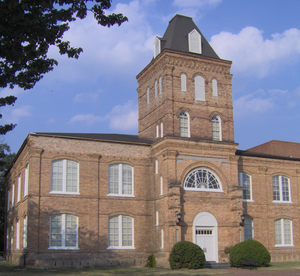 Campbell University was founded as a community school on January 5, 1887, called Buies Creek Academy. It was founded by North Carolina minister James Archibald Campbell, under the conviction that no student should be denied admission because of lack of funds. In 1926, the school attained junior college status and changed its name from Buies Creek Academy to Campbell Junior College. In 1961, Campbell became a senior college. The name was changed to Campbell University on June 6, 1979, with the addition of the Norman Adrian Wiggins School of Law.

The Norman Adrian Wiggins School of Law was founded in 1976, and the Lundy-Fetterman School of Business was begun in 1983. The Pharmacy School and School of Education were established in 1985. The Campbell University Divinity School was established in 1995. The School of Law moved from Buies Creek to its new Raleigh campus in 2009. The School of Osteopathic Medicine, North Carolina's first new medical school in more than 35 years, opened in August 2013. Since then, Campbell has opened the Catherine W. Wood School of Nursing and announced plans to open the School of Engineering in August 2016.[3] 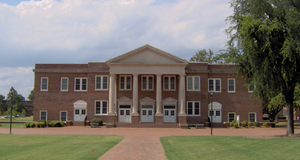 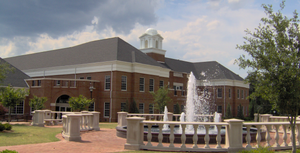 Campbell offers over 100 tracks and concentrations; master’s programs in business, education, pharmaceutical science, clinical research and divinity; and professional programs in law, pharmacy, physician assistant, physical therapy, and medicine. The University also makes study abroad and other special programs available. In 2012, the undergraduate acceptance rate was reported at 40.5%.[4] Along with Campbell's premier undergraduate programs, the school has also achieved renown for its graduate programs. Since its establishment in 1986, Campbell University School of Pharmacy, now College of Pharmacy & Health Sciences, has maintained a 99 percent passage rate on both state and national exams. In ten of the last sixteen years, Campbell Pharmacy students have achieved a 100 percent passage rate on the North American Pharmacist Licensure Examination (NAPLEX).

The School of Law Class of 2015 had an unemployment rate of 17% and 50% of 2015 graduates had obtained long term full time as an attorney 9 months after graduation, according to statistics provided by the ABA.[5]

The Lundy-Fetterman School of Business offers a joint MBA with Pharm.D., J.D., and M.Div. students. Also, undergraduate business students have the option of electing to stay a fifth year to earn a joint BBA/MBA. Campbell is a dynamic institution in the wealth management industry by offering a one-of-a-kind degree, the Bachelor of Business Administration in Trust and Wealth Management. Banks and financial institutions from around the country court Campbell students for paid summer internships and for permanent hire upon graduation. The Lundy-Fetterman School of Business also offers one of twenty PGA accredited golf programs in the United States.

In August 2011, the College of Pharmacy & Health Sciences launched a master's degree in Physician Assistant Studies (MPAS). One year later, it began a Master of Science in Public Health degree program. The University is also seeking accreditation for a new Doctor of Physical Therapy (DPT) program with a projected start date of January 2014. The University's newest school, the School of Osteopathic Medicine, welcomed its first class in August 2013. The mission of the Campbell University School of Osteopathic Medicine (CUSOM) is to educate and prepare community-based osteopathic physicians in a Christian environment to care for the rural and underserved populations in North Carolina, the Southeastern United States and the nation.

Campbell University also has an Adult and Online Education program with an online campus and campuses at Fort Bragg, NC, Camp Lejune, NC and RTP in Raleigh, NC. Campbell University's Online Education program was established as a pilot program in 1999. The program originated at the Camp Lejeune Campus and became a separate program in 2004, relocating to the Main Campus.

Campbell University fields 17 NCAA Division I sports and are adding women's lacrosse in 2012 to raise the total to 18. As of the 2011-2012 academic year, the Camels rejoined the Big South Conference after a 17-year hiatus in which they served as a member of the Atlantic Sun Conference. The Lady Camels' swim team is a member of the Coastal Collegiate Swimming Association (CCSA). The Men's Wrestling team is an associate member of the Southern Conference.

The Pine Burr is Campbell University's yearbook published every year in the Spring and given out to the students before final exams.[6]

The Lyricist is Campbell University's literary magazine, featuring poetry and prose from students and statewide contributors.

The Campbell Times is the student newspaper at the university and is published monthly during the spring and fall semesters.

WCCE-FM is an FM radio station broadcasting on frequency 90.1 that was signed on by the university on October 7, 1974. Campbell sold the station in 2007.