From Infogalactic: the planetary knowledge core
Jump to: navigation, search
This article is about the town in Scotland. For ships named for the town, see HMS Campbeltown. For towns with similar names, see Campbelltown (disambiguation) and Campbellton (disambiguation).

i/ˈkæmbəltən/; Scottish Gaelic: Ceann Loch Chille Chiarain or Ceann Locha) is a town and former royal burgh in Argyll and Bute, Scotland. It lies by Campbeltown Loch on the Kintyre peninsula. Originally known as Kinlochkilkerran (an anglicization of the Gaelic, which means "head of the loch by the kirk of Ciarán"), it was renamed in the 17th century as Campbell's Town after Archibald Campbell (Earl of Argyle) was granted the site in 1667.[4] Campbeltown became an important centre for shipbuilding and Scotch whisky, and a busy fishing port.

Campbeltown is one of five areas in Scotland categorised as a distinct malt whisky producing region, and is home to the Campbeltown single malts. At one point it had over 30 distilleries and proclaimed itself "the whisky capital of the world". However, a focus on quantity rather than quality, and the combination of prohibition and the Great Depression in the United States, led to most distilleries going out of business. Today only three active distilleries remain in Campbeltown: Glen Scotia, Glengyle, and Springbank.[5][6][7][8]

The well known folk song titled Campbeltown Loch, I wish you were whisky is based on the town's history in this industry. 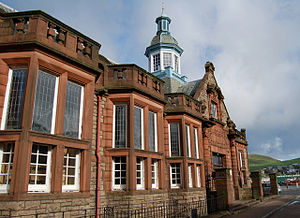 The old Library and Museum 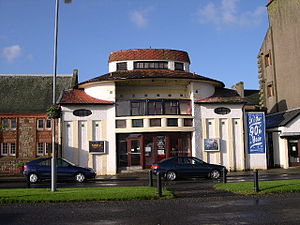 There are several listed buildings in Category A in the town and include the following.

Campbeltown boasts a museum and a heritage centre. The museum has a varied collection of items from Campbeltown's past, and prehistoric items excavated from sites around Kintyre, such as axeheads, jewellery and combs. The 19th century building, by John James Burnet, also houses a library and has plaques or exhibits related to famous Kintyre people: for example, William McTaggart and William Mackinnon.[9] Near the museum is the cinema known as the Wee Picture House, a small but distinctive Art Nouveau building of the Glasgow School dating from 1913 and believed to be the oldest surviving purpose-built cinema in Scotland.[10] These buildings are on the waterfront, as is a 14th-century Celtic cross that also served as a mercat cross.[11][12]

St Kieran (Ciarán of Clonmacnoise) lived in this area before the town existed.[13] A cave named after him can be visited at low tide, as can the cave on nearby Davaar Island where pilgrims and tourists go to see a 19th-century crucifixion painting.

Campbeltown also hosts the annual Mull Of Kintyre Music Festival, which has seen acts ranging from up-and-coming local bands to well-established groups such as Deacon Blue, The Stranglers and Idlewild perform.[14]

A recent addition has been the Kintyre Songwriters Festival, a fairly low key annual gathering aimed at promoting the wealth and variety of original music across the area. The festival is held during the last weekend of May and is open to anyone interested in performing.

The Kintyre Camanachd are a local shinty team that belongs to the Camanachd Association.

In May 2012 Campbeltown and Dunoon were jointly named in a report by the Scottish Agricultural College as the rural places in Scotland most vulnerable to a downturn. The "vulnerability index" ranked 90 Scottish locations according to factors associated with economic and social change.[15][16]

Campbeltown Airport, lies near the burgh, and a scheduled service[17] runs between here and Glasgow International Airport on weekdays and some summer Sundays.

The town is the westernmost town in Great Britain (for the avoidance of doubt, the island of Great Britain) by reference to which it has the population of a large village, laying claim to its town status due to port status and its central close grid of streets. Near the end of a long peninsula makes for a time-consuming road journey, and to some extent the area relies on sea and air transport, like the Inner Hebrides. However it is linked to the rest of Scotland by the A83 (to Tarbet) and A82 (from Tarbet to Glasgow). Bus service is provided by West Coast Motors.

Davaar Island at the mouth of Campbeltown Loch

Ferries sail from Campbeltown to Ballycastle in Northern Ireland, operated by Kintyre Express.[18] An earlier service had been suspended in June 2002; the new service, which runs to Ballycastle every Friday to Monday during summer months and on Mondays and Fridays during the winter months, commenced in 2011.

In 2006 a foot passenger ferry operated by Kintyre Express ran between Campbeltown and Troon every Monday, Wednesday and Friday with a crossing time of one hour in calm weather. By 2007 this ferry no longer ran, although the vessel can be chartered privately.[18]

As with the rest of the British Isles and Scotland, Cambeltown experiences a maritime climate with cool summers and mild winters. The nearest official Met Office weather station for which online records are available is at Campbeltown Airport/RAF Machrihanish, about 3 mi (4.8 km) west of the town centre.

Campbeltown is one of the few communities in the Scottish Highlands where the Scots language predominated in recent centuries, rather than the previously widespread Scottish Gaelic, an enclave of Lowland Scots speech surrounded by Highland Scottish speech. This was due to the plantation of lowland merchants in the burgh in the 17th century. The dominant position that Lowland Scots had in the town has today been taken by the English language, in the form of the Scottish English dialect. 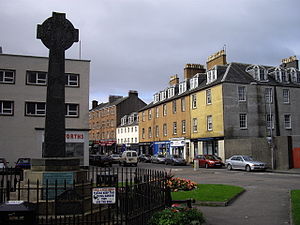 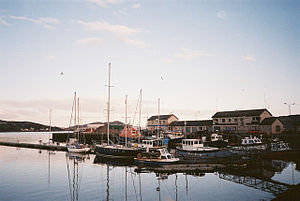 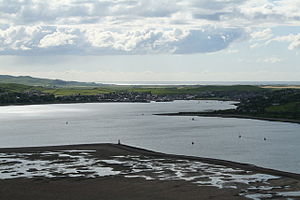 Campbeltown Loch and Campbeltown. Looking down from the top of Davaar. In the foreground is the Doirlinn, then the loch. On the western side of the loch is Campbeltown and beyond that Machrihanish Bay can be seen