The Canadian Citizenship Act, S.C. 1946, c. 15, is an Act of the Parliament of Canada which separated Canadian citizenship from British nationality.[2][3]

The status of "Canadian citizen" was originally created under the Immigration Act, 1910,[4] to designate those British subjects who were born, naturalized or domiciled in Canada.[5] All other British subjects required permission to land. "Domicile" was defined as having been resident in Canada for three years, excluding any time spent in prisons or mental institutions.[5]

A separate status of "Canadian national" was created under the Canadian Nationals Act, 1921,[5][6] which was defined as being a Canadian citizen as defined above, their wives, and any children (fathered by such citizens) that had not yet landed in Canada.

However, these concepts were merely subsets of the status of "British subject", which was regulated by the Imperial British Nationality and Status of Aliens Act 1914,[7] which was adopted in Canada by the Naturalization Act, 1914.[8]

Canadian citizenship, as a status separate from British nationality, was created by the Canadian Citizenship Act, 1946, which came into effect on 1 January 1947.

Canadian citizenship was generally conferred immediately on the following persons:[9]

In the latter two cases, a "Canadian" was a British subject who would have been considered a Canadian citizen if the 1947 Act had come into force immediately before the marriage or birth (as the case may be).

Where the child born outside Canada was not a minor (i.e., was not under 21 years in age) at the time the Act came into force, proof of landed immigrant status was required to confirm Canadian citizenship.

In addition to those people who became Canadian citizens upon the coming into force of the Act (popularly known as the "1947 Act" due to the year it came into force), citizenship afterwards was generally acquired as follows: 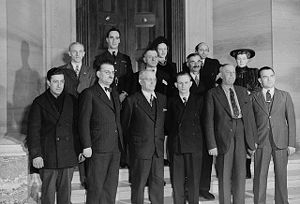 Loss of Canadian citizenship generally occurred in the following cases:

Although Canada restricted dual citizenship between 1947 and 1977, there were some situations where Canadians could nevertheless legally possess another citizenship. For example, migrants becoming Canadian citizens were not asked to formally prove that they had ceased to hold the nationality of their former country. Similarly children born in Canada to non-Canadian parents were not under any obligation to renounce a foreign citizenship they had acquired by descent. Holding a foreign passport did not in itself cause loss of Canadian citizenship.

A notable exception to the 1947 act is the annexation of Newfoundland to Canada in 1949, whereby all native or naturalized Newfoundlanders were granted Canadian citizenship under the laws stated in the citizenship act, upon the date of union on April 1, 1949.[10]