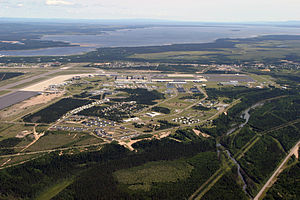 Note: Primary lodger units at Canadian Forces Bases used by the Royal Canadian Air Force are wings of the RCAF.

The Canadian Forces were reduced during the 1990s from a high of 90,000 personnel in the late 1980s to the present force levels. Coinciding with personnel and equipment reductions was the politically controversial decision to close a number of bases and stations which were obsolete or created duplication.

A small number of these "closed" facilities have actually continued operating as before; but, because of cost and administrative efficiency—or, in the case of radio and radar facilities, automation—, they have been absorbed into other nearby bases and therefore do not qualify for separate designations. For example, the CF Leadership and Recruit School at St. Jean, Quebec, is now a lodger unit of CFB Montreal, and the former CFS Masset is a detachment of CFS Leitrim. Other facilities are now used as training grounds for reserve/militia units.