The Canary Islanders, or Canarians (Spanish: canarios), are an ethnic group living in the archipelago of the Canary Islands (an autonomous community of Spain), near the coast of Western Africa. The distinctive variety of the Spanish language spoken in the region is known as habla canaria (Canary speech) or the (dialecto) canario (Canarian dialect). The Canarians, and their descendants, played a major role during the conquest, colonization, and eventual independence movements of various countries in Latin America. Their racial and cultural presence is most palpable in the countries of Uruguay, Venezuela, Cuba, and Puerto Rico.

The islands were conquered by Normands, Portugueses, Andalusians and Castilians at the beginning of the 15th century. In 1402, they began to subdue and suppress the native Guanche population. The Guanches were initially enslaved and gradually absorbed by the Spanish colonizers.

After subsequent settlement by Spaniards and other European peoples, mainly Portuguese, the remaining Guanches were gradually diluted by the settlers and their culture largely vanished. Alonso Fernández de Lugo, conqueror of Tenerife and La Palma, oversaw extensive immigration to these islands during a short period from the late 1490s to the 1520s from mainland Europe, and immigrants included Galicians, Castilians, Portuguese, Italians, Catalans, Basques, and Flemings. At subsequent judicial enquiries, Fernández de Lugo was accused of favoring Genoese and Portuguese immigrants over Castilians.[7]

Modern-day Canarian culture is Spanish with some Guanche roots. Some of the Canarian traditional sports such as lucha canaria (Canarian fight), juego del palo (stick game) or salto del pastor (shepherd's jump), among others, have their roots in Guanche culture. Additionally, other traditions include Canarian pottery, words of Guanche origin in the Canarian speech and the rural consumption of guarapo gomero and gofio.

The strong influence of Latin America in Canarian culture is due to the constant emigration and return over the centuries of Canarians to that continent, chiefly to Puerto Rico, Cuba, the Dominican Republic, and coastal Venezuela. To a lesser extent, they also went to the US states of Louisiana (mostly the southern portion) and Texas (mostly in and around San Antonio), and some areas in eastern Mexico including Nuevo León and Veracruz.[8] 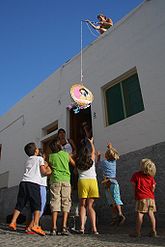 Canarian children playing with a piñata.

The inhabitants of the Canary Islands hold a gene pool that is mostly of Berber and Iberian extract. Guanche genetic markers have also been found recently in Puerto Rico and, at low frequencies, in peninsular Spain, or later emigration from the Canary Islands.[9] 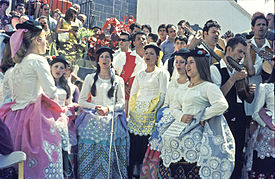 The most frequent (maternal-descent) mtDNA haplogroup in Canary Islands is H (37.6%), followed by U6 (14.0%), T (12.7%), not-U6 U (10.3%) and J (7.0%). Two haplogroups, H and U6 alone account for more than 50% of the individuals. Significant frequencies of sub-Saharan L haplogroups (6.6%) is also consistent with the historical records on introduction of sub-Saharan slave labour in Canary Islands. However, some Sub-Saharan lineages are also found in North African populations, and as a result, some of these L lineages could have been introduced to the Islands from North Africa.[10][11] A 2009 study of DNA extracted from the remains of aboriginal inhabitants found that 7% of lineages were haplogroup L, what leaves open the possibility that these L lineages were part of the founding population of the Canary Islands.[12]

A 2003 genetics research article by Nicole Maca-Meyer et al. published in the European Journal of Human Genetics compared aboriginal Guanche mtDNA (collected from Canarian archaeological sites) to that of today's Canarians and concluded that "despite the continuous changes suffered by the population (Spanish colonization, slave trade), aboriginal mtDNA lineages constitute a considerable proportion [42–73%] of the Canarian gene pool".

Although the Berbers are the most probable ancestors of the Guanches, it is deduced that important human movements (e.g., the Islamic-Arabic conquest of the Berbers) have reshaped Northwest Africa after the migratory wave to the Canary Islands and the "results support, from a maternal perspective, the supposition that since the end of the 16th century, at least, two-thirds of the Canarian population had an indigenous substrate, as was previously inferred from historical and anthropological data."[13] mtDNA haplogroup U subclade U6b1 is Canarian-specific[14] and is the most common mtDNA haplogroup found in aboriginal Guanche archaeological burial sites.[13]

Y-DNA, or Y-chromosomal, (direct paternal) lineages were not analysed in this study; however, an earlier[which?] study giving the aboriginal y-DNA contribution at 6% was cited by Maca-Meyer et al., but the results were criticized as possibly flawed due to the widespread phylogeography of y-DNA haplogroup E1b1b1b, which may skew determination of the aboriginality versus coloniality of contemporary y-DNA lineages in the Canaries. Regardless, Maca-Meyer et al. state that historical evidence does support the explanation of "strong sexual asymmetry...as a result of a strong bias favoring matings between European males and aboriginal females, and to the important aboriginal male mortality during the Conquest."[15] The genetics thus suggests that native men were sharply reduced in numbers due to the war, large numbers of Spanish men stayed in the islands and married the local women, the Canarians adopted Spanish names, language, and religion, and in this way, the Canarians were Hispanicized.[citation needed]

Indeed, according to a recent study by Fregel et al. 2009, in spite of the geographic nearness between the Canary Islands and Morocco, the genetic heritage of the Canary islands male lineages, is mainly from European origin. Nearly 67% of the haplogroups resulting from are Euro–Eurasian (R1a (2.76%), R1b (50.62%), J (14%), I (9.66%) and G (3.99%)). Unsurprisingly the Spanish conquest brought the genetic base of the current male population of the Canary Islands. Nevertheless, the second most important haplogroup origin is Northern Africa. E1b1b (14% including 8.30% of the typical berber haplogroup E-M81), E1b1a and E1a (1.50%), and T (3%) haplogroups are present at a rate of 33%. Even if a part of these "eastern" haplogroups were introduced by the Spanish (they are well represented in Spain), we can suppose that a good portion of this rate was already there at the time of the conquest.[16][17] According to the same study, the presence of autochthonous North African E-M81 lineages, and also other relatively abundant markers (E-M78 and J-M267) from the same region in the indigenous Guanche population, "strongly points to that area [North Africa] as the most probable origin of the Guanche ancestors". In this study, Fregel et al. estimated that, based on Y-chromosome and mtDNA haplogroup frequencies, the relative female and male indigenous Guanche contributions to the present-day Canary Islands populations were respectively of 41.8% and 16.1%.[16]

The Guanches are related to the indigenous Berbers of neighboring Morocco. The Guanche language is firmly in the Afro-Asiatic family of languages, and is a dialect of the Berber subfamily therein.

The overwhelming majority of native Canarians are Roman Catholic with various smaller foreign born populations of other Christian beliefs such as Protestants from northern Europe and Africans following Islam.

Historically, the Canary Islands have served as a hub between Spain and the Americas, and therefore large groups of Canary islanders have emigrated and settled all over the New World as early as the 15th century, mainly in Cuba, Puerto Rico, Dominican Republic, Venezuela and Uruguay.

The Canarians were known as Isleños ("islanders") to peninsular Spanish, and they also went by that name during emigration to the Americas. In the United States, they settled in two places: Louisiana and Texas, both then parts of the Spanish Empire, with Louisiana being the premier settlement. When the Isleños in the United States are referred to, it usually applies to the Canarian descendants in Louisiana. There were four places in southeast Louisiana settled by Isleños, with the main settlement being St. Bernard Parish.

The Isleños still speak the Canarian dialect of Spanish. Their Spanish has some borrowed words from neighboring cultures. The Isleños are proud of their heritage and have annual festivals in Louisiana to celebrate their culture. There is a museum as well as an exclusive Isleño cemetery and a church in St. Bernard Parish. The Isleños have dominated the fishing and farming industries, especially sugarcane.

In Texas, in earlier times, there was a small community of Isleños who settled in San Antonio in 1731, one hundred years before the first English-speaking immigrants arrived in the region.