Canford School is a coeducational independent school for both day and boarding pupils, in the village of Canford Magna, near to the market town of Wimborne Minster in Dorset, south west England.

The school was founded in 1923 and is located in 300 acres of ground on the banks of the River Stour. There are approximately 630 pupils at Canford, organised into houses and ranging in age from 13 to 18. Currently,(2014) 5% of students in the school are foreign nationals. Ben Vessey is the Headmaster; Richard Knott is the Second Master. The Daily Telegraph ranked it in the top five co-educational boarding schools in the United Kingdom at A Level in 2013.[citation needed]

Canford has seven boarding houses (Beaufort, Marriotts, Court, Franklin, Monteacute, de Lacy and School House) and three day houses (Lancaster, Salisbury and Wimborne). Each house has a married housemaster/mistress, three tutors (one resident in each boarding house) and at least one house matron. House year groups vary between 10–15 pupils and each community numbers 60–65.

Canford also has one of the few Real Tennis courts remaining in the United Kingdom.[citation needed]

The school was originally founded in 1923. 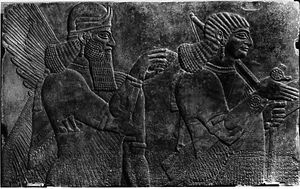 In 1992, a lost Assyrian stone relief was rediscovered on the wall of "the Grubber" (the school tuck shop).[1] The relief was sold by Christie's at auction in 1994 for £7.7 million (US$11.9 million), by far the highest price that had been paid at the time for an antiquity.[citation needed] Although it is at first sight rather unlikely that such a valuable item should be found on the wall of a school tuck shop, the history of the school explains how the relief came to be there. It had been brought back from the site of Nimrud in northern Mesopotamia (Iraq) by Sir Austen Henry Layard along with other antiquities which were displayed at Canford before it was a school. Originally Canford had been a private country house (known as Canford Manor), designed by Edward Blore and improved by Sir Charles Barry, and the residence of Layard's cousin and mother-in-law, Lady Charlotte Guest and her husband, Sir John Josiah Guest. At that time, the building now known as the Grubber had been used to display antiquities and was known as "the Nineveh Porch". It was however believed by the school authorities to be a plaster copy of an original which had been lost overboard during river transit and little attention was paid to it after the school was established. A dartboard was even hung in the Grubber close to where the frieze was displayed. It was John Russell of Columbia University who identified the frieze as an original, one of a set of three relief slabs taken from the throne room of Assyrian King Assurnasirpal II (883–859 BC). A new plaster copy now stands in the foyer of the Layard Theatre at Canford and a number of "Assyrian Scholarships" are available, funded from the sale proceeds which also helped pay for the construction of a new sports facility.[citation needed]

The original relief is now part of the collection of the Miho Museum in Japan.[2][3]

In 2005, the school was one of fifty of the country's leading private schools which were found guilty of running an illegal price-fixing cartel, exposed by The Times, which had allowed them to drive up fees for thousands of parents.[4] Each school was required to pay a nominal penalty of £10,000 and all agreed to make ex-gratia payments totalling three million pounds into a trust designed to benefit pupils who attended the schools during the period in respect of which fee information was shared.[5] However, Mrs Jean Scott, the head of the Independent Schools Council, said that independent schools had always been exempt from anti-cartel rules applied to business, were following a long-established procedure in sharing the information with each other, and that they were unaware of the change to the law (on which they had not been consulted). She wrote to John Vickers, the OFT director-general, saying, "They are not a group of businessmen meeting behind closed doors to fix the price of their products to the disadvantage of the consumer. They are schools that have quite openly continued to follow a long-established practice because they were unaware that the law had changed."[6]

In March 2006, the school suffered an outbreak of Legionnaires' disease though only two students were affected.[7]

The Layard Theatre is situated inside Canford School and is open to the public.[8] It seats 299 people and can also cater for those who are restricted to a wheelchair. It was opened by Sir Richard Eyre in May 1999, and was part-funded from the £7.7 million achieved through the sale of an Assyrian relief (see below), originally brought to Canford when it was a private house by Sir Austen Henry Layard in the mid-19th century.

Nick Gorman, who taught art at Canford from 1997–2000, was commissioned to design the logo for the Layard Theatre.[citation needed]