From Infogalactic: the planetary knowledge core
Jump to: navigation, search
Not to be confused with Cannelloni or Cannellini.

Cannoli (Italian pronunciation: [kanˈnɔːli]; Sicilian: cannula) is an Italian pastry desserts of the Sicily region. The singular is cannolo ([kanˈnɔːlo]; in the Sicilian language cannolu), meaning "little tube", with the etymology stemming from the Arabic "Qanawat".[1] Cannoli originated in Sicily in Piana degli Albanesi and are a staple of Sicilian cuisine.[2][3] They are also popular in Italian-American cuisine. In Italy, they are commonly known as "cannoli siciliani", Sicilian cannoli.

Cannoli consist of tube-shaped shells of fried pastry dough, filled with a sweet, creamy filling usually containing ricotta. They range in size from "cannulicchi", no bigger than a finger, to the fist-sized proportions typically found south of Palermo, Sicily, in Piana degli Albanesi.[4] 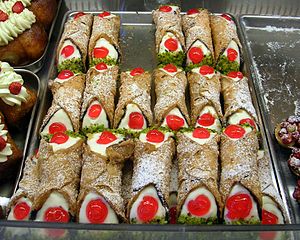 Cannoli have been traced to the Arabs during the Emirate of Sicily,[5][6] with a possible origin for the word and recipe deriving directly from qanawāt. These were deep fried dough tubes filled with various sweets, which were a popular pastry across the Islamic world at the time, from Al-Andalus to Iraq and including Sicily.[7] Cannoli come from the Palermo and Messina[8] areas and were historically prepared as a treat during Carnevale season, possibly as a fertility symbol; one legend assigns their origin to the harem of Caltanissetta. The dessert eventually became a year-round staple throughout Italy.

The versions with which Americans are most familiar tend to involve variations on the original concept. This is possibly due to adaptations made by Italians who immigrated to the United States in the early 1900s and discovered limited availability of certain ingredients. The cannoli sold in Italian-American bakeries today usually still contain ricotta, but mascarpone is a less common alternative. Rarely, the filling is a simple custard of sugar, milk, and cornstarch. In either case, the cream is often flavored with vanilla or orange flower water and a small amount of cinnamon. Chopped pistachios, semi-sweet chocolate pieces, and candied citrus peel or cherries are often still included, dotting the open ends of the pastries.

In some Italian-American families a variant using pizzelle cookies as a shell instead of fried dough has been popular since the 1930s. This variant comes from the regions of Lazio and Abruzzo close to the Monte Cassino which is the area attributed to the development of the pizzelle. In this variant, the cookies while still hot from the press are wrapped around a dowel or other handy round item like a rolling pin, to form the tube and allowed to cool at which point the cookie hardens. This is then filled with a sweetened ricotta filling.