Cannon is a CBS detective television series produced by Quinn Martin which aired from September 14, 1971 to March 3, 1976. The primary protagonist is the title character, private detective Frank Cannon, played by William Conrad. He also appeared on two crossover episodes of Barnaby Jones.

Cannon is the first Quinn Martin-produced series to be aired on a network other than ABC. A "revival" television film, The Return of Frank Cannon, was aired on November 1, 1980. In total, there were 124 episodes.

Frank Cannon was a detective with the Los Angeles Police Department, however he retired after the deaths of his wife and son in a car accident and later became a private detective. The series begins at the point where Cannon is just beginning this new career (the pilot film picks up after Cannon has just spent 2 1/2 months overseas on an investigation). The cause of death of Cannon's wife and child was not clear through the first four seasons of the show. However, the first episode of the fifth and final season revolves around Cannon's investigation of the deaths, and he finally finds out the reason they were killed.

The noticeably overweight Frank Cannon had expensive tastes, especially in food and cars. (His primary vehicle was an ice-blue '72 Lincoln Continental Mark IV.) During the series' run, his car would range from a Lincoln 1971 Mark III to a 1976 Mark IV in various color schemes, all dark over light blue exteriors, with interiors ranging from red velour to dark-blue leather... Cannon's investigations were mostly for clients in the Southern California area, although on occasion he was called in for investigations much farther away (e.g., New Mexico in the pilot).

Cannon occasionally would get hurt (shot or beaten) and knocked unconscious. He carried a gun for self-defense, usually a snub-nosed .38 Special revolver (which appeared to be a Colt Detective Special). Sometimes he used other guns (Including an M1911 and a B.A.R). He was known to subdue suspects with karate chops, judo holds, and occasionally he would thrust and knock down adversaries with his huge abdomen.

In the first two seasons Cannon was a pipe smoker. In the third season, the pipe was seen occasionally; it was subsequently dropped altogether.

Frank Cannon had his first meeting with Barnaby Jones (Buddy Ebsen), an aging veteran private investigator who had retired and turned over his agency to his son, Hal. However, Hal is killed. With the aid of Cannon and Hal's widow, Betty Jones (Lee Meriwether), they hunt down Hal's killer. Afterward, Jones decides to come out of retirement. The premiere episode of Barnaby Jones, "Requiem for a Son" was planned as a second-season Cannon episode so that Barnaby Jones could qualify as a spin-off of Cannon, but when Barnaby Jones was sold as a separate series, the script was reworked into the premiere of that show. William Conrad appeared as Cannon in the guise of a special guest star.

There was a second "crossover" between the series. The first part of the two-part episode, "The Deadly Conspiracy", was aired as the second episode of the fifth season of Cannon on September 17, 1975; the second part aired two nights later as the fourth season premiere of Barnaby Jones.

In an episode of his Thames Television series, British comedian Benny Hill parodied 1970s American detective shows. In the skit, Hill played several staple characters of the genre: Frank Cannon, Robert Ironside, Theo Kojak, Sam McCloud (ironically, all bar the latter were airing on BBC1 at the time rather than on Hill's home of ITV) and, although he was not a part of the genre, Agatha Christie's Belgian detective, Hercule Poirot. A female cast member played the role of Pepper Anderson.

The comedian Franklyn Ajaye does a routine where he mentions that it takes Frank Cannon so long to get out of his car 2-3 times a show that there is hardly time for anything else.

In Mystery Science Theater 3000, one of the more absurd inventions displayed by the Mad Scientists was a William Conrad Refrigerator Alert; it sounds off if William Conrad raids your refrigerator.

Impressionist Billy Howard included Cannon as one of the detectives parodied in his novelty hit record "King of the Cops".

In an era before cell phone use, Cannon was using a "mobile phone" in his car, which was highly rare at the time. (TV detectives Richard Diamond and Peter Gunn each had one in the late '50s.) He would begin by asking the mobile operator to dial a call for him. Phones of this type were precursors to modern cell phones. The phone prop itself, in his car, was a Motorola brand MTS mobile phone.

Cannon's pistol has been subject to discussion. Most agree that it is some variant of a Colt Detective Special in .38. At least one source claims the actual weapon to be a Colt Bankers Special in .22 LR but it is generally agreed that Cannon carries a .38. 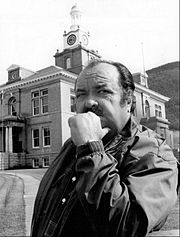 William Conrad was nominated for an Emmy Award in both 1973 and 1974 (Best Lead Actor in a Drama Series), but Richard Thomas won for The Waltons and in 1974 Telly Savalas won for Kojak.

In the first season, a young Martin Sheen had a recurring role as ex-policeman Jerry Warton, but the character did not extend beyond the first year—in fact, in the third season, Sheen guest starred as a lawyer who murdered Cannon's client.

CBS DVD (distributed by Paramount) has released the first two seasons of Cannon on DVD in Region 1. Season 3 was released on January 10, 2013 via Amazon.com's CreateSpace program. This is a Manufacture-on-Demand (MOD) release, available exclusively through Amazon.com.[1]

On May 4, 2015, it was announced that Visual Entertainment had acquired the rights to the series in Region 1.[2] It was subsequently announced that VEI release Cannon - The Complete Collection on September 2, 2015.

In Region 4, Shock Entertainment has released the first two seasons on DVD in Australia.

The Hollywood Foreign Press Association nominated Cannon for three Golden Globe Awards, for Best Television Series - Drama in 1974 and for William Conrad in 1972 and 1973 as Best Actor in a Drama Television Series.[4]

A series of nine tie-in novels were published in the 1970s by Lancer/Magnum in the United States and Triphammer/Corgi in the United Kingdom.[5]