Cannon Street is a road in the City of London, the historic nucleus of London and its modern financial centre. It runs roughly parallel with the River Thames, about 250 metres (820 ft) north of it, in the south of the City.

It is the site of the ancient London Stone and gave its name to Cannon Street station, a mainline railway terminus and connected London Underground station.

The area around Cannon Street was initially the place of residence of the candle-makers. The name first appears as 'Candelwrichstrete Street' in 1190.[1] The name was shortened over 60 times[1] as a result of the local cockney dialect and settled on Cannon Street in the 17th century,[2] and is therefore not related to the firearms.

A Cannon Street in Birmingham, according to the archives of Birmingham Central Library, is named after the London street. 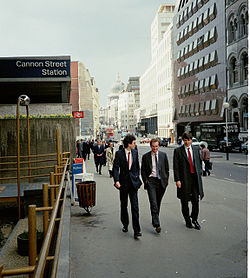 In the late 19th century Cannon Street was occupied by large wholesale warehouses, especially of cotton goods and other fabrics.[3]

The London Stone, from which it has been suggested distances were measured in Roman times, was originally situated in the middle of Cannon Street. It was later set into the wall of St. Swithin's Church,[3] and now rests in a case to the side of the street.

The Roman governor's palace Praetorium may also have been located in this area, between the principal street of Roman Londinium and the River Thames. The remains of a very large high status building were found with a garden, water pools and several large halls, some of them decorated with mosaic floors. The plan of the building is only partly preserved, but was erected in the second part of the 1st century and was in use until around 300, rebuilt and renovated several times.

It is the street upon which singer Marc Almond suffered a near fatal crash in 2004 whilst riding pillion on a motorcycle.

Where Queen Street crosses Cannon Street there is a pedestrian-priority "Central Plaza" area. This was part of an award-winning public realm improvement scheme undertaken in 2006.[4]

Cannon Street formed part of the marathon course of the 2012 Olympic and Paralympic Games.[5][6]

Cannon Street has eight pubs (as of 2012) in and around the area[7] which is one of the largest concentrations in the City of London.