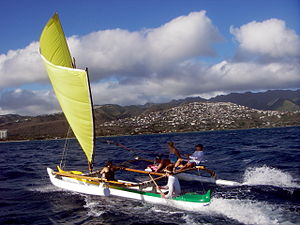 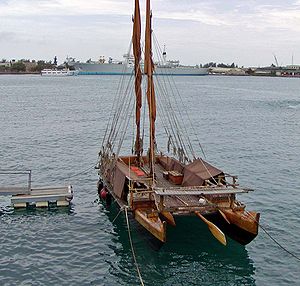 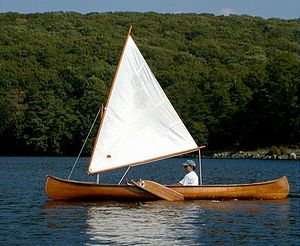 Canoe sailing refers to the practice of fitting a Polynesian outrigger or Western canoe with sails.

The first sailing canoes emerged in ancient Polynesia over 1,000 years ago.

The canoes were built from island materials such as plaited leaf sails, island woods, organic webbing. The manned paddled sailing canoes explored the vast Pacific Ocean. The Polynesian voyaging canoes are to ancient Polynesian culture as the invention of the wheel in Asia and Europe. Today there is a revival of canoe sailing in Polynesia and racing is very much alive in the Hawaiian Islands in particular. Hawaiian sailing canoes have evolved: Wood has been replaced by glass-reinforced and carbon fiber-reinforced polymer, sails are now made from Dacron and Kevlar.

The Hōkūleʻa is a modern interpretation of a Polynesian voyaging canoe. It is made from modern materials such as fibreglass, plywood, resin glue, terylene sails and ropes with modern fittings and safety equipment. No authentic Polynesian voyaging canoe has ever been seen although numerous catamaran types were seen by Europeans from the 18th century. Voyaging canoes have crossed the Pacific many times. In most voyages they have been escorted, or towed, by a modern mother ship.

John MacGregor of Scotland is generally believed to have developed the first modern sailing canoes. During the 1860s, he had at least seven boats built that he called Rob Roys and sailed and paddled them in Europe, the Baltic and the Middle East. He also wrote a book which popularized the design and the concept: "in walking you are bounded by every sea and river, and in a common sailing-boat you are bounded by every shallow and shore; whereas, ...a canoe [can] be paddled or sailed, or hauled, or carried over land or water" (1000 Miles in the Rob Roy Canoe).

In 1886 the ACA and the RCC held the first international canoe sailing regatta.

In 1991 American Howard Rice sailed and paddled a sailing canoe solo around Cape Horn, Chile considered historically to be the Mount Everest of sailing challenges. He was awarded a Certificate of Merit by the Chilean Navy and inducted into the Cape Horners Society.