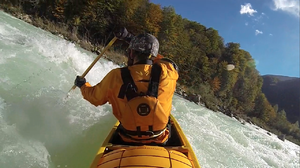 Canoeing is a sport or recreational activity which involves paddling a canoe with a single-bladed paddle. In some parts of Europe canoeing refers to both canoeing and kayaking, with a canoe being called a Canadian canoe.

An ancient mode of transportation, modern canoeing was established in the late 19th century. In 1924, canoeing associations from Austria, Germany, Denmark and Sweden founded the Internationalen Representation for Kanusport, forerunner of the International Canoe Federation. Canoeing became part of the Olympic Games at the 1936 Summer Olympics.

A recreational form of canoeing is canoe camping.