From Infogalactic: the planetary knowledge core
Jump to: navigation, search
Not to be confused with the University of Canterbury in Christchurch, New Zealand or the Canterbury University in the Republic of Seychelles.

Canterbury Christ Church University (CCCU) is an Anglican new university in Canterbury, Kent, England. Founded as a Church of England college for teaching training in 1962, it has grown to full university status and celebrated its 50th anniversary in 2012.[5]

The focus of its work is in the education of people going into public service. The university retains its status as a Church of England foundation. It is also known as England's "missionary university".[6]

The university has developed rapidly since its inception in 1962 and now has nearly 20,000 students based at campuses across Kent, in Canterbury, Broadstairs, Folkestone, Medway and Tunbridge Wells. As well as being the largest centre of higher education in Kent for the public services – notably teacher training, health and social care and the emergency services – the university also offers academic and professional programmes, including credit-bearing higher education entry certificates, doctorates and research degrees. Policing and law courses have also been delivered both for UK and overseas law enforcement agencies. The university gives academic validation to ordination and post-ordination training courses for Anglican clergy delivered by the Canterbury and Rochester dioceses.

Canterbury Christ Church College (CCCC) was founded in 1962 by the Church of England in order to meet the needs of church schools at a time of teacher shortage. Classes were originally held in the priory next to St Martin's Church, a building which has seen many uses including the private residence of a Bishop of Dover and also the residence for the principal of CCCC. The founding principal was the Revd Frederick Mason.[7]

The campus for the then Canterbury Christ Church College was constructed at North Holmes Road, Canterbury, on land which had once been used for orchards and domestic buildings of the adjacent St Augustine's Abbey, part of Canterbury's World Heritage Site. The campus is a low-rise development centred around a courtyard adjacent to the college chapel of Christ in Majesty. The chapel roof, formed of four isosceles triangles in glass, is a distinctive local landmark. The buildings are largely named after former Archbishops of Canterbury.

In the early 1970s, the first degree programme, the Bachelor of Education, was established. In 1977, the college began to offer joint honours degrees in other subjects.[8] In the late 1980s, the college was substantially enlarged by the addition of health studies.

In 1995, the college was awarded the authority by the Privy Council to grant its own degrees for taught courses,[9] upon which the college's name was changed to Canterbury Christ Church University College. This form of the name was adopted to avoid confusion with Christ Church, Oxford (one of the Oxford University colleges) and University of Canterbury, in Christchurch, New Zealand.

It was awarded the title of "university" in 2005, which recognised the successful delivery of degree programmes and adopted a new name: Canterbury Christ Church University (CCCU).[8]

The Archbishop of Canterbury was later appointed, by virtue of office, as chancellor, the honorary head of the institution. The inauguration of the university and the installation of Rowan Williams as chancellor took place in a ceremony at Canterbury Cathedral in December 2005.

In 2007, the university attracted publicity due to its controversial policy forbidding civil partnership ceremonies to take place at its properties.[10] This decision by the university's governing body has since been reversed.[11]

In 2009, the university was granted power to award research degrees by the Privy Council.

In 2011, Canterbury Cathedral hosted a ceremony, as Robin Baker became the first vice-chancellor in the UK to be installed by the Most Revd and Rt Hon Rowan Williams, Archbishop of Canterbury. The fiftieth anniversary of foundation was celebrated in November 2012,[12] with a ceremony in Canterbury Cathedral at which more than sixty surviving members of the first intake were awarded honorary Bachelor of Education degrees and the Chancellor, Rowan Williams, was awarded an honorary doctorate of the university.

In June 2013, Rama Thirunamachandran was appointed as the university’s vice-chancellor.[13]

The university was used as preparation grounds by the national team of Puerto Rico at the 2012 Summer Olympics. 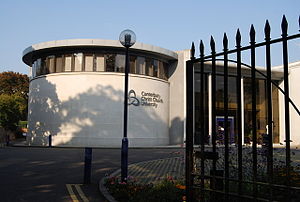 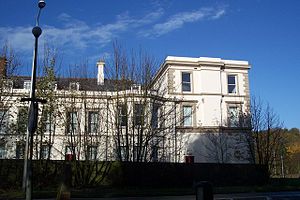 In addition to the original Canterbury site on North Holmes Road, the university has four other sites around the city - 'Augustine House', 'Hall Place Enterprise Centre' 'Sidney Cooper Gallery' and the 'St. George's Centre'. It also has further campuses and centres in Kent - at Broadstairs, Tunbridge Wells and Medway, (as part of the Universities at Medway partnership).

In 2000, Canterbury Christ Church acquired the lease of the Sidney Cooper Gallery in Canterbury city centre, originally established as an art school by the noted cattle painter Thomas Sidney Cooper in 1868. Art students moved into the building in December 2002, taking it back to its original use as an art school. In 2004, the refurbished gallery space opened to the public. The gallery exhibits staff and student work, as well as work by local, national and international artists. The Grapevine Gallery and cafe opened to the public in September 2006, selling artwork by students and staff as well as providing internet cafe facilities.

In 2003-2004, two major buildings were acquired in Canterbury – a large office block formerly known as Clarkson House, this was demolished and replaced by Augustine House, a new building which was designed by architectural practice ADP and is the home of the university's integrated library and student support services. The project was completed in 2009.[14] Augustine House won the Best Educational Project category at the Local Authority Building Control Awards for the South East region.[15] 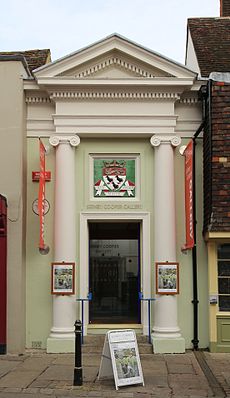 Entrance to the Sidney Cooper gallery

In 2009 the university built a sports centre called the Christ Church Sports Centre which houses health and fitness facilities for students and staff. It is used by students on physical education and sport and exercise courses as a venue for performance analysis and research.

Hall Place, a 16th-century building in Harbledown, has been renovated and renamed Hall Place Enterprise Centre. It is home to the Centre for Enterprise and Business Development, a gateway for business support and access to academic resources and training programmes for small businesses.[16]

A new St. George's Centre opened at the beginning of the 2012 academic year. This incorporates the Student Union facilities, bars and accommodation for five hundred residents.[17]

In April 2014 it was announced that Canterbury Christ Church University had bought the former site of Canterbury Prison. The university is now consulting on plans to convert the building into student accommodation for the North Holmes campus.[18]

North Holmes Campus in Canterbury is the original site for the university, which was established in 1962 as a teacher training college. It now offers a range of undergraduate and postgraduate programmes across four faculties: Arts and Humanities; Business and Management; Education; Health and Social Care and Social and Applied Sciences. The university is the largest centre of higher education in Kent for the public services, notably teacher training, nursing, social care and policing.

The nearby Grade II listed[19] redundant church of St Gregory, has been developed as a performance centre for the university's choirs and musical ensembles. Most of these are open to public attendance.[20]

Programmes in health, social care and early years are provided here. The campus is home to the university's Centre for Health and Social Care and has been equipped with a mixture of teaching space, specialist facilities and staff offices. The two buildings on this campus are Rowan Williams Court (RWC) and Cathedral Court (located within the Compass Centre), which offer lecture theatres, seminar rooms, open access learning area, and skills laboratory for health care at RWC. Cathedral Court is newer and smaller, located within the Compass Centre, and has similar facilities to RWC.

Students and staff also have access to the re-furbished Drill Hall Library, which has been created in the former Royal Engineers Drill Hall, and is used by all students from the Universities at Medway partnership. 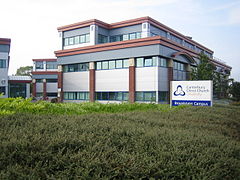 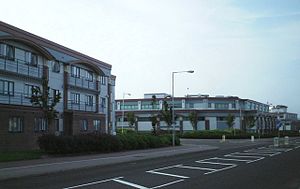 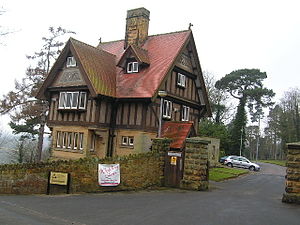 The Entrance to David Salomons House

The Salomons Museum is a museum, north of Tunbridge Wells. It preserves the country house of Sir David Salomons, the first Jewish Lord Mayor of London, and of his nephew, Sir David Lionel Salomons, a scientist and engineer. Originally it was called 'Broomhill'. The university acquired Salomons Museum from the National Health Service (NHS) in 1995.

The university then sold the campus in 2012, leasing back the Stable Block and Gate Lodges in order to continue to provide a base for its Applied Psychology programmes and consultancy work.[21] This lease expires in 2016 (with an option to extend the lease until 2018). The Applied Psychology programmes will be relocated to a new site in the Tunbridge Wells area, though there is currently no confirmed site.

Salomons Centre for Applied Psychology offers postgraduate clinical psychology programmes including a doctorate in Clinical Psychology and a PhD in Professional Practice. It also provides training for local NHS Trusts.

Salomons Consulting (formerly the Department for Leadership and Management Development) provides postgraduate programmes in business leadership and management as well as bespoke development programmes in this field. It is also contracted by external organisations for consultancy work.

Canterbury Christ Church is organised into academic faculties that contain schools and centres for teaching and research as well as professional service departments that provide central services.[22]

The four academic faculties are: