The oldest traces of humans in the Lucerne area are stone artifacts and cave bear bones found in the Steigelfadbalm cave on Mt. Rigi from the Middle Paleolithic or about 30,000 BC. Other animal bones including mammoth, reindeer and giant deer from the local glacial maximum have also been found in the canton. Around 17,000 BC the glaciers disappeared from the Swiss plateau and recolonization is likely at that time.

The first Paleolithic and Mesolithic settlement discovered in the canton is in the Wauwilermoos, which is now a Swiss heritage site of national significance.[5] A number of other settlements have since been found, mainly on sandy, dry elevations in the immediate vicinity of water. The settlements of Egolzwil 3 in Wauwilermoos in Egolzwil, Seematte at Hitzkirch and Halbinsel in Sursee are part of the Prehistoric Pile dwellings around the Alps a UNESCO World Heritage Site.[6]

The Wauwilermoos houses had wooden or bark floors and hearths of clay. The villages had ceramic vessels and wood, bone, antler, stone and flint tools as well as textiles. Copper ax blades and knives provide the first evidence of metal use in Switzerland. Imported mollusks show that there were trade connections to the Mediterranean. The bones at Egolzwil 3 are over two thirds from domestic animals with the remainder from wild animals. The main domesticated animals were sheep, goats and pigs with only a few domestic cattle. The animals hunted included deer, roe deer, wild boar and elk.[7]

During the Bronze Age the canton was quite settled. There were a number of settlements on the shores of Lake Sempach and Lake Baldegg along with hilltop settlements, graves and scattered items throughout the area. At Hochdorf-Baldegg a fenced village from the early Bronze Age (2200–1500 BC) was uncovered. The single-story houses all had clay or stone hearths. During the Middle Bronze Age (1550–1350 BC) most of the villages were not located directly on the lake shores. The Late Bronze Age settlement at Sursee-Zellmoos on Lake Sempach featured houses arranged in rows with mortared stone. The walls were timber lined with clay. Another Late Bronze Age settlement near the village of Schötz was densely populated between 1350 and 800 BC.

During the Roman era, the canton was once again thickly settled. A number of farms were built in the north-south running valleys (Wigger, Suhre, Wyna and See valleys). During the 1st century AD, the farms provided food for the Legion camp in Vindonissa and for the larger settlements located in the Swiss plateau.

Towards the end of the 1st century there was a vicus at Sursee. The remains of houses show that there were a number of small shops and manufacturing buildings in the town. The west bank of the Suhre was fortified with a stone slip and may have served as a ship or raft berth. Imports from various regions of the Romans Empire (southern Spain, southern Italy, Lipari, southern and eastern Gaul and the Germanic areas) provide evidence of extensive trade relations. Sursee was likely a freight hub for trade with the entire Alpine region.[7]

File:Picswiss LU-20-40.jpg
Ruins of an early medieval church at Sursee

Following the collapse of the Roman Empire, the canton of Lucerne was settled by the Alamanni, who generally settled away from the Roman settlements. Some exceptions include a Roman manor at Büron and the Roman town of Sursee. An Alamannic grave field was found at Aesch with 61 graves with wooden coffins from before the 7th century before. In the women's graves there were necklaces with glass and amber beads, while swords were found in the men's graves. Belt buckles and small iron knives were found in the graves of both sexes. A few items from the southern Alpine region, southern Germany and Burgundy indicate that trade continued.

Two early medieval stone grave vaults, both of which were used for multiple burials, were found in the church of Altishofen. In the treasury of Beromünster Abbey there is a 7th-century ornate reliquary of gilded copper plates, which probably came from northern Italy.[7]

Lucerne grew up around a Benedictine monastery, founded about 750 on the right bank of the Reuss by Murbach Abbey in Alsace, of which it long remained a "cell". It is first mentioned in a charter of 840 under the name of Luciaria, which is probably derived from the patron saint of the monastery, St Leodegar. The name Lucerrun is first mentioned in 1252. At some point, a small village grew up around the monastery. The first signs of a municipal constitution appear in 1252.

With the growing power of the Habsburgs in the area the ties that bound Lucerne to Murbach weakened. In 1291 the Habsburgs finally purchased Lucerne from Murbach. The purchase of Lucerne by the Habsburgs drove the three forest cantons (Uri, Schwyz and Unterwalden) to form an Eternal Alliance, an act that is considered to be the foundation of Switzerland. In 1332 Lucerne became the fourth member of the Eidgenossen or Swiss Confederation, and the first town to join the rural forest cantons. 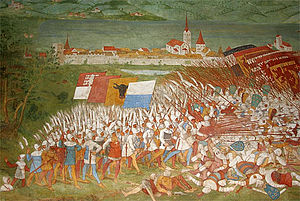 The Battle of Sempach solidified Lucerne's place in the Swiss Confederation
File:Amstaldenhandel.jpg
Amstaldenhandel, an event in the history of the canton of Lucerne, Switzerland

The Battle of Sempach (1386) near Sempach (which while allied wouldn't become part of the canton for 8 more years) drove the Habsburgs out of the region and strengthened the Confederation. That victory led also to the gradual acquisition of territory ruled by and from the town.

Amstalden, a wealthy innkeeper Schüpfheim in the Entlebuch valley of the canton of Lucerne, was the leader of a planned rebellion of the valley against the city of Lucerne. In a plot to limit the power of the city, officials from the neighbouring canton of Obwalden had promised their support. The conspiracy was detected before they could stage the planned coup. On 24 August 1478, Amstalden was arrested, tortured and interrogated, and finally beheaded in November 1478.

During the Reformation Lucerne remained attached to Roman Catholicism, of which ever since it has been the great stronghold in Switzerland. The papal nuncio resided here from 1601 to 1873. In the 16th century, during the early modern age, the town government fell into the hands of an aristocratic oligarchy, whose power, though shaken by the Swiss peasant war of 1653 in the Entlebuch, lasted till 1798. Under the French-supported Helvetic republic (1798–1803) Lucerne was the seat of the central government. When the republic collapsed, under the Act of Mediation (1803) it was one of the six "Directorial" cantons and during the Restoration (from 1815 to 1848) it was one of the three ruling cantons.

The patrician government was swept away by the cantonal constitution of 1831. But in 1841 the Conservatives regained power. They quickly recalled the Jesuits, who had been expelled by earlier radical governments, to head the cantonal school system. The riots that followed brought about the Sonderbund War (1847) in which the Conservatives were defeated, the decisive battle taking place at Gisikon, not far from Lucerne.[8] 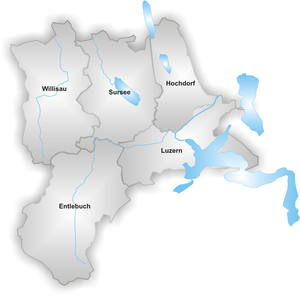 The Canton is divided into 5 districts termed Ämter:

Main article: Municipalities of the canton of Lucerne

Most of the population (as of 2010[update]) speaks German (91%) as their first language, while Serbo-Croatian, Italian, Albanian and English are the second most common languages (3%), followed by Portuguese and French with 2% each, and Spanish with 1%.[13]

The largest population centres are Lucerne, Emmen and Kriens.

The historical population is given in the following chart:[7] 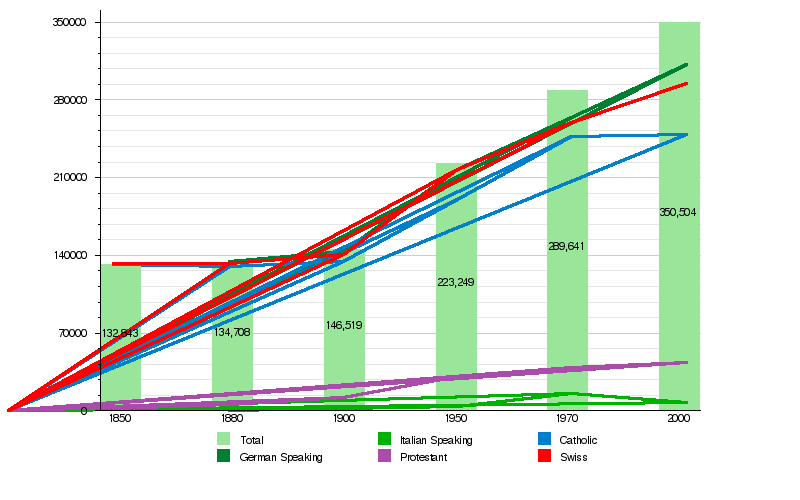 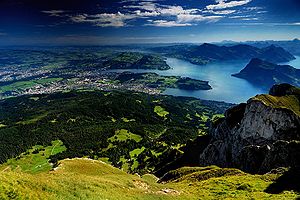 Much of the land in the canton is used for agriculture. Agriculture is the most significant source of income, but industry is also developed. The most important agricultural products are crops, fruit and cattle breeding. Industry concentrates on textiles, machinery, paper, wood, tobacco and metallurgical goods.

Tourism is of great importance. The canton of Lucerne is a gateway to holiday resorts in the nearby Alps, and much of the transit traffic between Germany and Italy crosses the region.

Institutions of higher education include the Lucerne University of Applied Sciences which also has campuses in Lucerne and Horw.